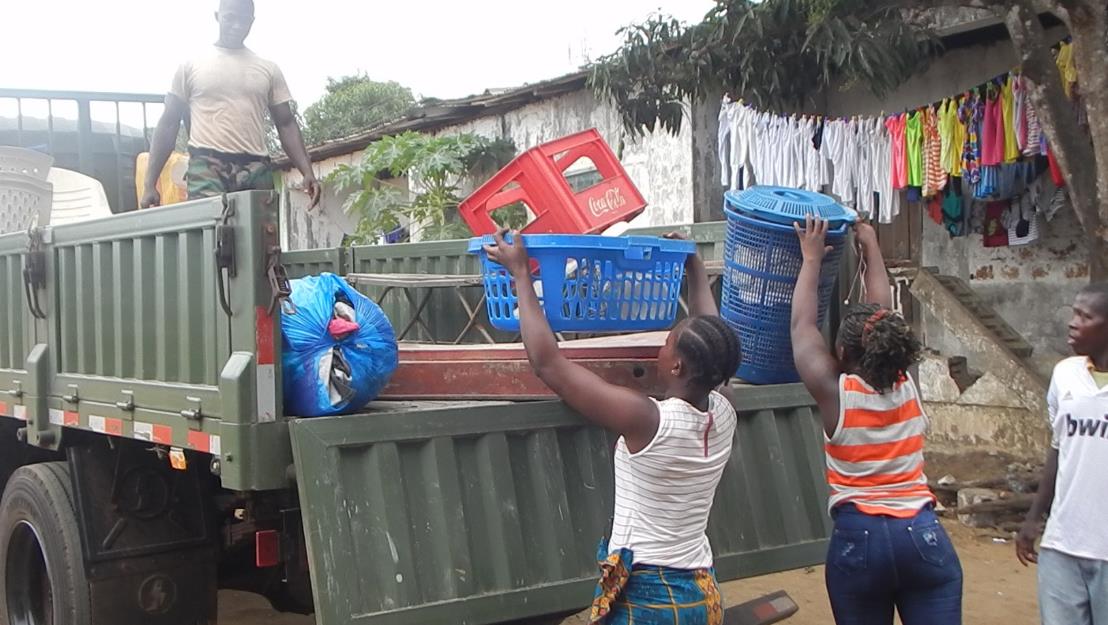 MONROVIA, Montserrado â€“ Defense Minister Brownie Samukai has shown that he is intent on taking back the 72nd Military Barracks after decades by squatters occupation by sending military trucks into the facility over the weekend.

The three trucks sent by the Defense Ministry arrived on Saturday, April 8, 2017, at 8:13 a.m. carrying unarmed members of the Armed Forces of Liberia.

The defense minister had said on April 4 that he would send the vehicles to transport squatters who did not have the means to do so.

When the soldiers arrived, they made announcements via a loudspeaker, calling on squatters who wanted to leave to bring out their belongings and board any of the trucks for their destination. A large crowd gathered at the 72nd Football Field to catch a glimpse of the soldiersâ€™ operation.

An AFL soldier was heard telling the gathering crowd that those wanting to leave would only be dropped off within the boundaries of Montserrado and not beyond.

The statement by the AFL soldier that the operation was only limited to Montserrado did not please some residents who hailed from other parts of the country.

A female occupant of the military facility who refused to disclose her name said if the Defense Ministry truly intended to help, it would transport residents to areas outside Montserrado.

â€œOccupants of the 72nd military barracks are from different counties and not Montserrado alone,â€ she said.

The AFL operation lasted for three hours and only three families voluntarily left their units.

Onlookers stood by and watched as the three families picked up their belongings on the trucks and left for their various destinations.

The operation also drew the attention of the United Nations Mission in Liberia, as two officers were seen in the area speaking to some of the departing families. Kebeh Kolubah, head of one of the families who decided to leave, said his family did not receive any package from Defense Ministry authorities to facilitate their resettlement.

Charles S. Geh, the community chairman, said the way Samukai went about with their removal from the facility was disheartening.

â€œMinister Samukai have been very harsh in dealing with occupants of the military facility,â€ Geh said.

He explained that the lack of proper information dissemination on the part of Roberts T. Payzien, who manages the military barracks, is of concern. â€œOccupants were not informed ahead of time regarding the AFL Saturday operation,â€ he said.

Geh said he had been told by Payzien that the trucks would instead be sent to the area for occupants wanting to leave on April 26 instead of April 8. Payzien, when contacted by The Bush Chicken, said Gehâ€™s claims were false and misleading.

According to Payzien, Samukai has been on the radio making the announcement that the Defense Ministry was indeed ready to take over its facility.

â€œGeh informed me he received a called from the Ministry of National Defense that trucks were coming on Saturday, April 8, to transport those wanting to leave,â€ Payzien said. Another familyâ€™s belongings onboard the AFL truck. Photo: Zeze Ballah

â€œMy concern now is to work with the leadership to see how the barracks can be empty come April 30,â€ he said.

Payzien mentioned that the squattersâ€™ leadership is playing double carded game by going to politicians and UNMIL with their grievances and not confronting him as a liaison of the Defense Ministry.

Some occupants said they are still waiting on May 1 because they havenâ€™t yet found accommodations.