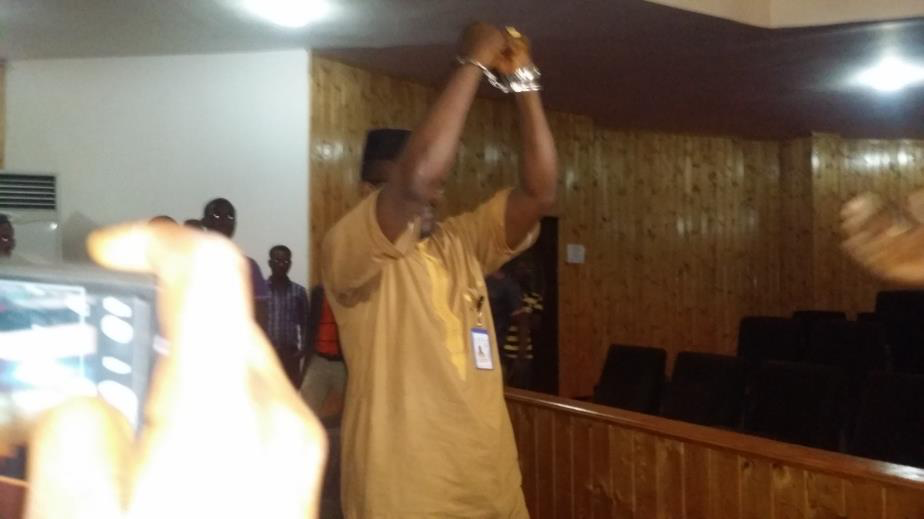 MONROVIA, Montserrado – The House of Representatives has unanimously cast a vote of no confidence in the deputy information minister for public affairs and declared him as “nongovernmental material.”

Eugene Fahngon was also charged with contempt of the legislature and sentenced to two days imprisonment at the Monrovia Central Prison. He was also fined L$4,999.99 (US$32.40).

The deputy minister spent his first night at the Liberia National Police headquarters because the legislative session concluded late. However, he will be transferred to the Monrovia Central Prison on Thursday, September 13.

Fahngon was charged with contempt for gross disrespect to the legislature.

The legislature had invited Fahngon to appear after testimony by the inspector general of the Liberia National Police, Col. Patrick Sudue, prompted the leadership of the House of Representatives. Sudue had appeared before the House to answer questions about other issues when he was asked about an incident that occurred between Fahngon and Rep. Edwin Snowe last Friday at the Zone Three police depot in Congo Town.

In his testimony, Sudue noted that Fahngon’s claim that Snowe had forced a man out of the holding cell was inaccurate. Instead, Sudue narrated that the man who photographed Fahngon without the deputy minister’s consent was being held by officers, but had not yet been placed in the holding cell yet.

Sudue said Snowe had asked to sign for the man, who was a staffer at the House of Representatives because the offense was not a serious one. However, according to the inspector general, Fahngon insisted that the man be placed in the holding cell, which was subsequently done.

The chief clerk was again mandated to prepare another letter to Fahngon, requesting him to appear before lawmakers on Wednesday with his lawyer.

On Wednesday, Fahngon showed up along with his lawyer, Frances Johnson Morris-Alison. However, when lawmakers were not ready to begin proceedings on time, Morris-Alison left the grounds of the Capitol Building to attend to other matters.

The proceedings began in Morris-Allison’s absence but Fahngon said he would not speak in the absence of his legal counsel.

“I will not speak in the absence of my legal counsel. I should be entitled to my legal counsel at every stage of an investigation and Article 21C of the Liberian constitution provides for that,” Fahngon told lawmakers.

He was then allowed to call his attorney, who reappeared after 45 minutes.

During the proceedings, Fahngon was testy with lawmakers, reminding them that both he and his lawyer were present on time to start the proceedings and that they had not been. His responses to questions did not ingratiate himself with the representatives.

As a result, Rep. Clarence Massaquoi of Lofa motioned to declare Fahngon as “nongovernmental material” and to have him imprisoned and fined.

“I move that Min. Eugene Fahngon be declared as nongovernmental material, imprisoned for two days at the Monrovia Central Prison, and fined L$4,999.99,” Massaquoi said.

Massaquoi added that Fahngon’s utterances had brought the House to “public disrepute.” The House unanimously voted to pass the motion.

Rep. Samuel Kogar of Nimba added that Fahngon did not only disrespect the House; he also disrespected the executive branch and lied under oath.

When members of the public first heard of Fahngon’s imprisonment, many criticized the legislature for wading into an issue that did not affect the lawmakers’ ability to conduct their constitutional duties. However, the representatives have made it clear that the punitive action against Fahngon is because of his performance before the body, and not because of his altercation with Snowe.

Since being appointed by the president, Fahngon has built a reputation as a brash and loud supporter of the government, often criticizing opposition members with colorful insults.

Sharing
Tags Eugene Fahngon, House of Representatives
Contributions to The Bush Chicken are not tax deductible.