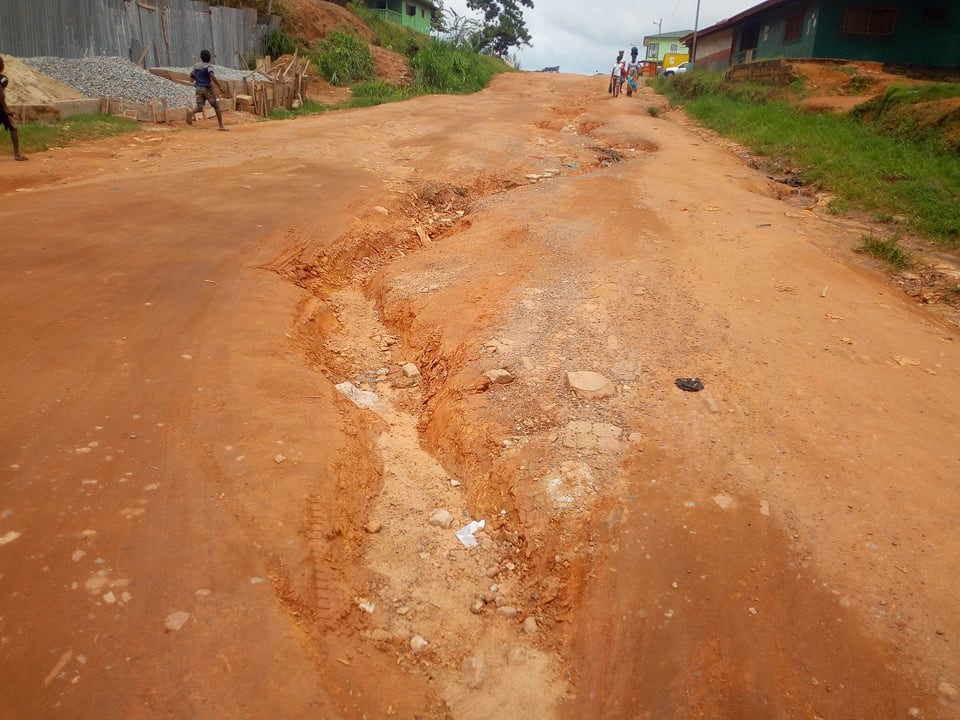 GBARNGA, Bong â€“ Several streets in Gbarnga and other parts of Bong are becoming increasingly inaccessible as a result of lack of rehabilitation.

Motorists often bump up and down in potholes that continue to plague the various streets, especially in Gbarnga. Â Gbarbea Street, Suakoko Street, People Street, and Kokoyah Road are among the most deplorable streets in Gbarnga.

The frustration here for residents and road users is that there are road building equipment that should routinely rehabilitate these roads, but the equipment have been broken down for a prolonged period of apparent poor maintenance. Bongâ€™s front end loader has been parked for over two years at the Gbarnga Administration Building. Photo: Moses Bailey.

In 2012, Bongâ€™s leadership negotiated a US$662,300 deal with a vendor to procure a front end loader, a motor grader, and a dump truck to rehabilitate existing roads and open new ones in the county. The money was taken from the County Social Development Funds.

The vendor was paid upfront US$634,300 for the front end loader and the motor grader, with a balance of US$28,000 to complete payment for the dump truck. The county is yet to pay the vendor his balance to take delivery of the truck.

The front end loader and motor grader were refurbished, even though the then-chairman of the Bong County Legislative Caucus, George Mulbah (who lost his reelection bid), along with other leaders, argued that the machines were brand new.

Dakemue Kollie, a health worker and resident of Gbarnga, is someone who can attest to the poor shape of the roads. He says the countyâ€™s leaders are doing nothing to repair them. â€œI am still waiting for someone to show me a street that was ever laid out by the machines that were bought in this county. All I know, streets that were opened, machines did some patrols on it; I donâ€™t even call that opening streets,â€ Kollie said.

Kollie said it is difficult nowadays to drive along most of the streets in Gbarnga due to the damage done to the roads as a result of erosion. He said he believes the machines have been poorly managed by leaders of the county.

â€œThe roads are even spoiling. Riding now in Gbarnga and its surroundings is like defensive riding; because the roads are narrow, so bad, and potholes are all around. It is difficult, it actually dangerous to ride around Gbarnga.â€

Bongâ€™s assistant superintendent for development, Anthony Sheriff, said the county does not have money at the moment to repair the machines. There has not also been routine maintenance schedule put in place for the equipment.

â€œThe next County Council Sitting, we will put in money for the repair of the machines,â€ Sheriff said.

Even though there was not a County Council Sitting last year, Sheriff said the leadership of the county allotted money last year to repair the machines, but the repair was not done.

â€œLast year we allotted US$15,000 to repair the machines, but that money was used as part of the pre-financing payment to do some roads work in Gbarnga,â€ Sheriff said.

Lincoln Kpanato, a commercial motorcyclist and a resident of Zowienta in Bongâ€™s first district, said it is challenging transporting passengers on bad roads in the county. â€œIn our area, the roads are bad and they are even narrow. When we are riding on the roads and encounter vehicles from the opposite side, we need to stop and park the motorcycles off the road to enable the car to pass,â€ Kpanato explained.

Kpanato is calling on leaders of the county to find a way and repair the machines to recondition some of the roads to enhance the free movement of road users with their goods and services. â€œWe are just asking them to help us recondition some of these roads because if they donâ€™t do that now, most of the roads will be cut off before the end of this rainy season,â€ Kpanato said.

As for Dakemue Kollie, he said if the cost to repair the machines is too much that the county cannot afford it for now, the equipment should be scrapped and sold so that the proceeds can be used to hire a contractor to do repair work on some of the roads.

These are not the only abandoned properties of Bong: two generators, the superintendentâ€™s residence, and several others have been similarly abandoned in the county.

Sharing
Tags Anthony Sheriff
Contributions to The Bush Chicken are not tax deductible.