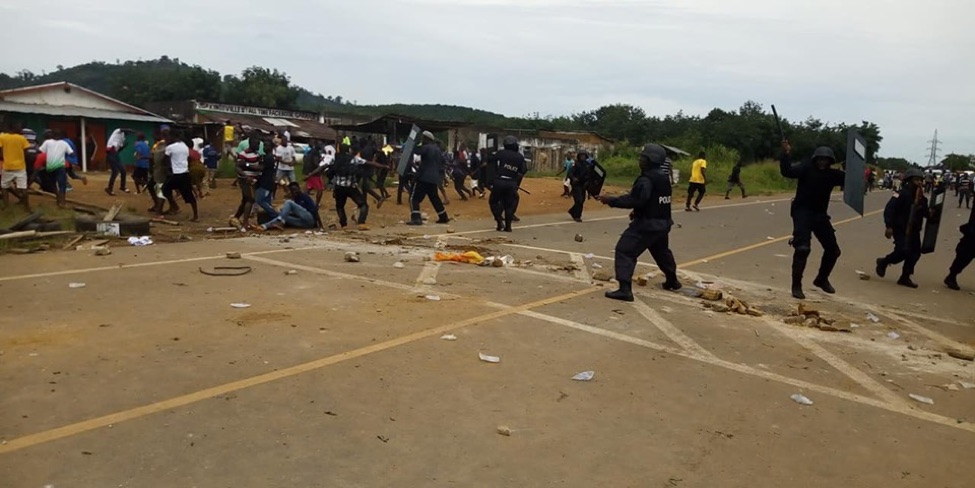 KINGSVILLE, Careyburg â€“ After a young man died and two others were injured from bullets allegedly fired by riot police on Monday in rural Montserrado, the Liberia National Policeâ€™s deputy inspector general for administration has assured the public that the responsible parties will be dealt with under the law.

â€œFrom the LNP standpoint, I can assure you that we are investigating and whoever found guilty will face the full weight of the law,â€ Sadiatu Reeves said.

She described the Kingsville incident as unfortunate, but she also frowned at community members for taking the law in their own hands.

â€œWhat examples are we showing as elders, to have our children growing up? Are we showing them to grow up in violence? Is that what we want? There are laws governing the state,â€ she said.

Reeves called on the Kingsville residents to follow the proper procedures in handling grievances against the police. Those procedures include reporting police misconduct through the Professional Standards Division and the Civilian Complain Board headed by human rights lawyer Tiawan Gongloe.

She also promised a â€œdecent burialâ€ for the 18-year-old Abraham Tommy, who reportedly died as a result of a bullet wound he sustained to his head when riot police shot several rounds of bullets to disperse protesters.

Both children went missing at the end of May and their mutilated bodies were discovered on June 3 with body parts extracted, a sign suggesting that they may have been used for rituals.

This was the second time in less than three weeks that protesters had blocked the road to demand that the government pays attention to their plight. The scene turned bloody when a police officer discharged several bullets in a bid to disperse the protesters.

Reeves, the deputy inspector general, called on the community to work with the police to ensure peace and security, noting that they did not need to assemble in the streets to seek justice. She asked that they complain to the Justice Ministry if they had â€œissues with the police.â€

Reeves made her statements while in Kingsville on Wednesday with police spokesperson Moses Carter to meet with the victimâ€™s family. That meeting ended in deadlock after the residents felt that Reeves was not showing enough remorse for the police alleged brutality.

Kingsville residents also said they thought the police spokesperson was attempting to justify the policeâ€™s unlawful actions by putting out misleading information that protesters were armed with harmful objects such as petrol bombs, cutlasses, and steel rods.

Even as residents have expressed their dissatisfaction, the deputy police inspector general for operations, Marvin Sackor, said police will be investigating the situation speedily.

Sackor said a team of investigators comprising of the Crime Services Division and the Profession Standards Division will probe into the case.

â€œAnyone who has photos and videos, when the investigators come around share it, donâ€™t hide it,â€ he said.

Meanwhile, medical reports from the Firestone Du-Side Hospital confirmed that Tommy died from a bullet wound to his head.

Nathan Greaves, a guardian to the deceased, said he was shocked over the earlier denial of police that three persons had been injured by bullets.