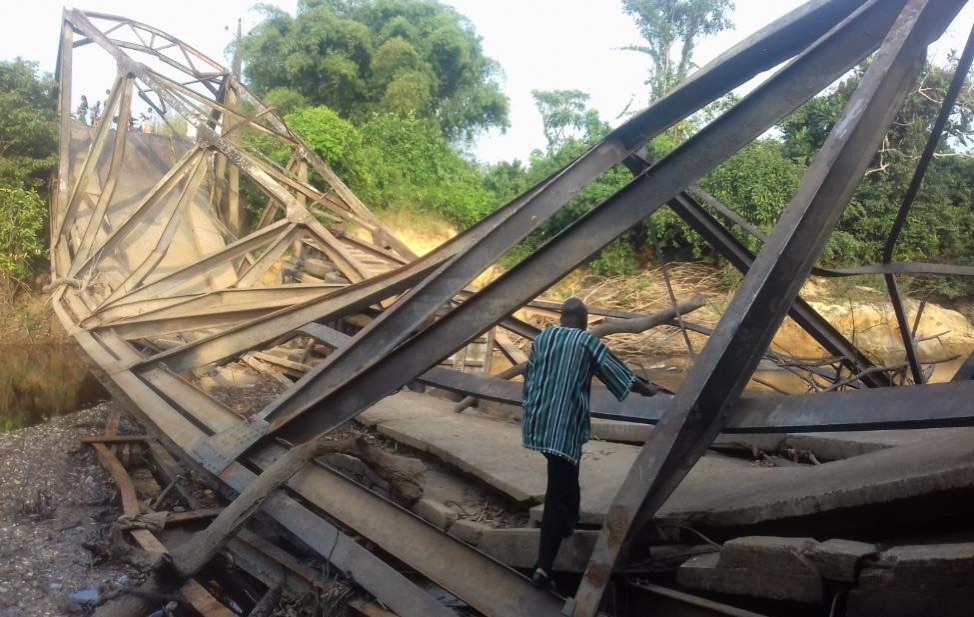 HARBEL, Margibi â€“ In 2017, the Du River Bridge collapsed when a truck transporting rocks for the rehabilitation of the Roberts International Airport runway drove along. The truck belonged to a Chinese firm involved in the construction at the airport.

Since the incident, the collapsed bridge has remained untouched and commuters who travel daily from Harbel to communities near the bridge continue to be challenged by their now-limited transportation options.

During the rainy season, when the riverâ€™s water level was much higher, the only means of transportation was a canoe ride from either side of the river. The small canoe was operated by a local fisherman immediately after the bridgeâ€™s collapse.

Appeals from residents who use the route regularly spurred Margibiâ€™s first district representative, Tibelrosa S. Tarponweh, to facilitate the purchase of a bigger canoe; he also provided 11 life jackets for use by the commuters.

Though a lot of the commuters were initially reluctant to wear the life jackets, they soon realized its importance when 12 persons were recovered after the canoe capsized on the river. It happened days after five persons drowned on the Gbehn River while traveling from Unification City to Dolo Town, a suburb of Harbel.

However, in recent days, the only viable option commuters now seem to have is to tread along the damaged bridge as there is no longer a canoe crossing commuters daily across the river.

â€œEveryone is silent about the danger that collapsed bridge poses to the lives of those who travel on it. As we speak, the truck that was on the bridge when it collapsed is being abandoned in the river,â€ Chea added.

Even as he spoke about the risk of walking on the damaged bride, Chea conceded that he himself uses it every day to commute to work.

A clerk at the Unification City Magisterial Court, Chea says leaders of the county have failed to work with the institutions responsible for the repair of the bridge.

Also seen crossing the bridge were pregnant women who were traveling to seek medical attention at the Firestone-run Du-Side Hospital.

Nyamah Tokpah, a pregnant woman in her early twenties, told The Bush Chicken she had to walk from Harbel to the bridge before riding a bike to get to the Du-Side Hospital.

Even with the collapsed bridge, Tokpah said the treacherous route remains the best for her because of its semi-paved condition.

â€œThe [alternative] division sixteen side is very bad. It is a dusty road and the company put too many speed breakers on the route,â€ she added. 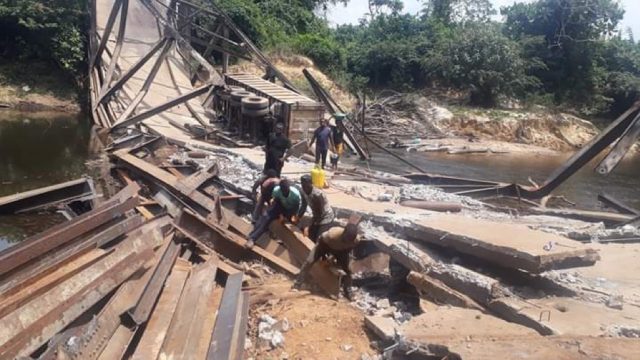 There may be some hope for local commuters. On Monday, February 25, 2019, local contractors were seen removing debris on the collapsed bridge. They told reporters that their work would continue for a month before any other work took place. However, the workers would not identify who hired them.

At his just-ended legislative report to his constituent, Rep. Tarponweh promised that construction of the bridge would commence early this year.

â€œLet me assure you all that we have concluded all of the discussions with Firestone Liberia, the Ministry of Public Works, and other actors involved for the reconstruction of the Du River Bridge,â€ he added.