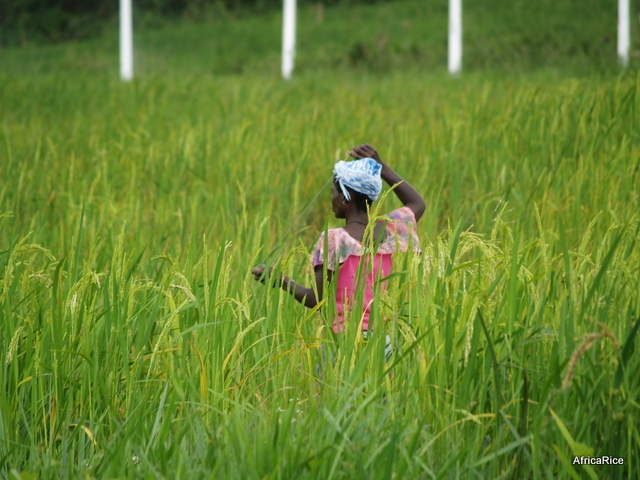 Amid calls for Liberians to begin consuming locally-produced crops, there are indications that the country is still far from achieving its goal of food self-sufficiency.

The Liberia News Agency reported in February that Finance and Development Planning Minister Amara Konneh urged Liberians to consume locally grown rice for the country to achieve food self-sufficiency. He suggested that the problem with Liberia not being self-sufficient in food production was due to Liberians not eating enough locally-produced rice.

In his statement, he said that if Liberians grew and ate more locally-produced rice and other essential food crops, the country would accumulate wealth to strengthen the agriculture sector and lead to economic growth.

Konneh illustrated this point by explaining that over a million tons of rice is imported every year, and the importers earn about US$5 per bag. â€œWe can prevent this money from leaving our country if we encourage the production and sale of more rice in Liberia,â€ he said.

Many farmers see a more complex problem. They say the government needs to do more to help farmers.

Levi Karnley, a farmer in Grand Bassa, said the governmentâ€™s current plan to achieve food self-sufficiency in Liberia does not seem to be working. He points out that there is little support for farmers to build their capacities and acquire modern farming tools in addition to fertilizers and pest prevention techniques.

Although Karnley generates at leastÂ L$30,000 (US$353) from the produce of his farm in each harvest season, most of the funds goes toward his schooling and familial support. The rest is reinvested in the farm.

Part of the problem, Karnley said, is that he has no knowledge of the resources the government makes available to farmers.Â  â€œ[In my community], I donâ€™t know how many interventions [the] government is making to assist farmers [to] increase their production capacities. For me, I have not felt itâ€¦ I have not seen it,â€ he said.

He said the remark by Konneh is only a policy statement and not something that will be achieved now. â€œMinister Konneh has said it, but is it working? No! â€“ [Nobody] is working towards achieving this plan now,â€ Karnley said. A small swampland farmer in Dolo Town on the outskirts of Firestone complained of termites as a result of lack of chemicals to protect the crops. In her early 50s, Bango Tambah grows okra, bitter balls, peppers and potato greens. She also grows rice on a smaller scale for trade on the local market. She explained that the termites were severely affecting her yield.

She said she did not have extra capital to buy more chemicals than she already does. â€œBecause of the ants, I find it difficult [to harvest] more crops despite the size of the farm,â€ she said.

â€œI like the stance of the governmentâ€¦but they must provide more assistance to us,â€ Tamba said.

Most of the farmers interviewed are seeking specific supports in loans, access to machinery and the provision of different chemicals for farming purposes. A trader in Harbel, Korpo Kpadeh, attributed the high cost of local produce on the market to a lack of capacity of Liberian farmers to supply the market sufficiently.

â€œHow will prices of food crops be less when almost all what we eat are from other countries?â€ Kpadeh said. â€œLook at the groundnuts, peppers, onions, and flour, for example. We [consume these products] every day but they are from Guinea. Even rice, our staple food, is [mostly] imported, you see.â€

To achieve food self-sufficiency in the country, Kpadeh said much needs to be done to build the capacities of farmers and local entrepreneurs.

The Chief Executive Officer of the BJB Business Center in Harbel, Joseph Dedegbor, has also welcomed Konnehâ€™s statements. He purchases rice from farmers for resale. Dedegbor questions the governmentâ€™s implementation of its policies, saying that many farmers are still not able to increase their capacities.

A local rice importer, Lorpu Keeta, has embrace the governmentâ€™s efforts to prioritize the consumption of locally produced rice and other food crops. She said the move was good but again questioned the capacity and preparedness of Liberian farmers to feed the market. Keeta believes that achieving the goal of self-sufficiency would be good for importers.

â€œI think it will help us because the local farmers will have no problem with [us] buying their goods in Liberian dollars, unlike now where we are compelled to buy [in] US dollars to import rice.â€ Keeta also said there needs to be better monitoring of those put in charge of expending funds intended agricultural purposes.

Joseph Lavela Saysay, a Liberian researcher in Agricultural Economics, said Liberia is currently producing less quantity of rice than what is required to feed the nation; therefore, it is largely food insecure.

A Ministry of Agriculture report said Liberia produced 290,000 metric tons or rice in 2010 even though the demand for consumption was 465,000 metric tons. It should come as no surprise to anyone that Liberia has the highest per capita consumption of rice in Africa. Because of the discrepancy between local production and the demand, almost 40% of the rice Liberians consume has to be imported. Saysay said Liberia has tremendous potential in rice production with great annual rainfall and favorable climate that can facilitate year-round production of rice. He said the country is endowed with about 600,000 hectares of irrigable land, of which less than 10% has been used.

Despite the high production potential, Saysay said yield in Liberia is just about 1.2 tons per hectare. This is low, especially when compared to other West African states. CÃ´te dâ€™Ivoire has a yield of 3 tons per hectare, while Benin and Senegal have four and seven, respectively.

At the height of the Ebola outbreak in Liberia, an assessment report by the Ministry of Agriculture said Ebola had severely hampered food production through a decrease in farming activities and access to food and markets.

The ministry said food production had slowed dramatically while the closures of markets and bad roads contributed to a worsening situation.

The report also said group farming activities in the country have largely halted, and farmers were no longer continuing the â€œKuu,â€ a cooperative system where farmers assist each other by sharing labor.

Even before the Ebola outbreak, food security was a significant issue. The Agriculture Sector Investment Program identified several problems in the sector. Among them are low production, bad road conditions, high post-harvest losses, low levels of incomes, and poor systems of coordination and information management. These conditions, the ministry said, have made Liberians net importers of food, making reducing the real cost of food an important food security objective.

Representatives of the United Nations Food and Agriculture Organization declined to comment specifically on whether the country is making gains in ensuring food security. They did say that the organization has provided an initial grant of US$500,000 to the Ministry of Youth and Sports to train 500 youths in agriculture in Bomi, Margibi, Grand Bassa and Montserrado.

Liberia was also one of the three hardest hit ebola countries that received US$500,000 each in December 2014 to help curb the impact of the disease on food security and the livelihoods of farmers. The grant came from the Africa Solidarity Trust Fund and is intended to be used over a 12-month period to assist 7,500Â households – about 45,000Â people – in the three targeted countries. The Ministry of Agriculture has not released any official report on the usage of the fund.

Activities included social mobilization and training to help stop the spread of Ebola. The fund would also strengthen savings and loan programs, particularly those involving women.

There are other programs aimed at bringing about food security in Liberia, such as the World Bank-funded West Africa Agricultural Productivity Program. However, it is unclear what tangible impact these programs are having on farmers and whether they are contributing to an increased domestic production of rice.

Over the course of two months, The Bush Chicken made several attempts to get the Ministry of Agriculture to respond directly to claims by farmers about the lack of access to and knowledge of specific resources being provided by the ministry. Gertrude Francis Deshield, the Public Relations Specialist for the Agriculture Ministry, has delayed in responding to our questions on these issues.