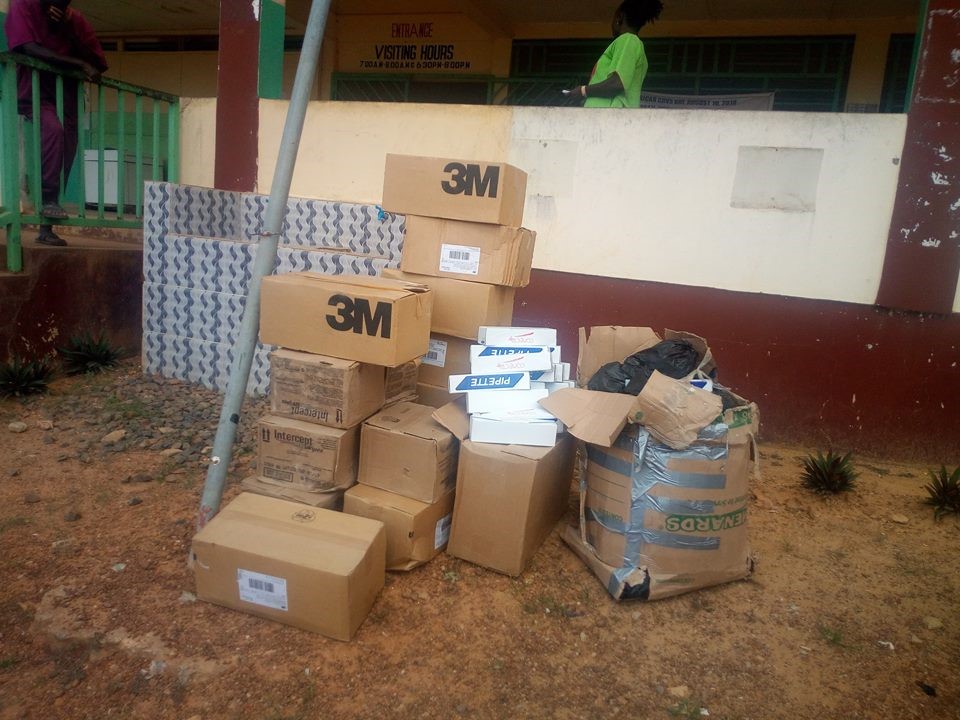 GBARNGA, Bong â€“ A Bong citizen living in the U.S. state of Minnesota has donated an assortment of medical supplies and used clothing for distribution to health posts in Bong.

The materials Dennis Garsinii donated were valued at US$85,000 and include personal protective equipment, face masks, and other medical equipment.

The C.B. Dunbar Maternity Hospital, the Samay Clinic, and Palala Clinic have received their shares of the consignment; the Baptist Soul Winning Conference Clinic in Gbarnga is expected to receive the last portion of the supplies in a few days.

Dorothy Toomann, former executive director of Development Education Network Liberia, is spearheading the distribution of the materials to the health facilities.

She told The Bush Chicken that Garsinii, being a son of Bong, is concerned about the health needs of citizens in Liberia.

â€œDennis Garsinii has been supporting Bong and Liberia in different ways. He is fond of mobilizing and organizing materials to help the grassroots Liberian people, particularly those that are working in the health sector,â€ Toomann said during a presentation at C.B. Dunbar Maternity Hospital in Gbarnga. Her organization is shouldering the cost of transporting the materials to the various facilities.

Toomann recounted that â€œthings like equipment and materials can become an issue, but Garsinii has been very, very good in supporting us.â€

Dr. Kour Geah, the medical director of the C.B. Dunbar Maternity Hospital, expressed delight over the donations and extended her appreciation to the donor. C.B. Dunbar is the only maternity hospital in rural Liberia.

â€œWe appreciate it highly; it came at a timely basis. We are so happy,â€ Geah said.

Her excitement even grew more when Toomann announced that Garsinii was preparing another assortment of medical materials to be shipped to Liberia in November.

â€œWe will appreciate more from him so that we can keep the hospital alive and keep providing the quality of care our people need to keep them alive,â€ Geah said.

She mentioned that, besides medical supplies, the hospital also faced shortages of drug and fuel.

â€œOur generator uses four to five gallons of fuel per hour. Most of our allotment goes to fuel purchase,â€ she said.

She noted that because of the huge numbers of the patients that visit the hospital on a daily basis, the hospital always experiences shortages of drugs and medical supplies. Like most government hospitals, C.B. Dunbar is operated on a free basis, and patients do not pay to access services.

Geah also noted that there was a need to solve the hospitalâ€™s electrical system. She said the facilityâ€™s â€œpoor wiring systemâ€ often causes electrical shocks during heavy rains, often when surgeries are being performed.

However, she said the administration was working to address the electrical problem. The central government increased the hospitalâ€™s budgetary allotment by US$120,000, which Geah believes should allow her to address this issue. The increase in the budget followed public outcries. Meanwhile, Dennis Garsinii has confirmed to The Bush Chicken that there is a consignment of medical supplies that will shortly arrive in Liberia.

â€œYes, there is another container of supplies that is scheduled to arrive in Liberia in November containing essential medical supplies estimated at US$150,000,â€ Garsinni wrote to The Bush Chicken.

He expressed hope that medical centers throughout Bong would benefit from the items, including examination gloves, surgical masks, hospital gowns, and hospital beds.

This is not the first donation Garsinii has made; he last donated medical supplies worth about US$30,000 in 2017.