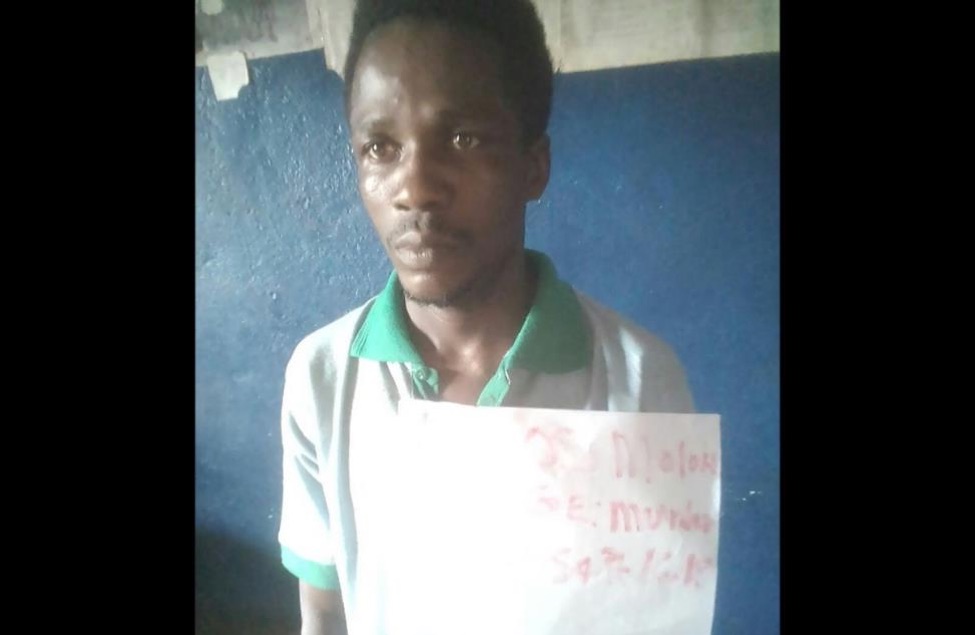 GBARNGA, Bong â€“ Police in Bong have arrested, charged, and sent to court Amos Molon, 29, for murder and rape in connection to the 2018 death of Satta Binda, 17, in Gbartala.

Molon, a resident of Gbartala, was arrested recently after results of a DNA test conducted on vaginal swabs from the victim, in addition to specimens from the crime scene, linked him to the acts.

Binda was raped, murdered, and her body dumped in the back of their yard in Gbartala in the early hours of September 15, 2018.

Following the incident, police arrested two persons: Josephine Solunteh, 24, and Clarence Davis, 24, as primary suspects. The two have since been detained at the Gbarnga Central Prison as the investigation continued in the killing of the teenager.

But a fresh revelation emerged on Monday when DNA results proved that Amos Molon was physically connected to the murder of Binda, according to a charge sheet prepared by the Crimes Services Department of the Bong Police Detachment.

â€œFBI laboratory DNA results from the vaginal swabs collected from [the] victim, Satta Binda, and specimens collected from the twine rope tied on the victimâ€™s neck reveal that defendant Amos Molon is the actual doer of the acts (murder and rape),â€ the police charge sheet read.

â€œIn view thereof, defendant Amos Molon is charged with the crimes murder and rape according to sections 14.1 and 14.70 of the New Penal Code of the Republic of Liberia, pending courtâ€™s trial.â€

Due to the complexities that characterized the investigation of Bindaâ€™s rape and murder case at the onset, the court commissioned a DNA check of all persons linked to the crime to assist the investigation.

Meanwhile, Molon, on Monday, confessed to committing the rape and murder of Binda before his lawyer and prosecutors during a police investigation in Gbarnga.

After having sexual intercourse with Binda at his house in Gbartala on the night of September 15, Molon, who claimed to be a boyfriend to Binda in his voluntary statement to police, said he later met Binda in a conversation with Clarence Davis the same night minutes after she left Molonâ€™s house.

Molon said he immediately confronted Binda to gather from her what was it that she was discussing with Davis.

He claimed that Binda insulted him in the instance, angering him to the point where he beat her until she was unconscious.

â€œI got vexed and started beating her until she dropped. She was not shaking. I went and cut twine rope from the nearby bush house,â€ Molon told police. â€œI tied Sattaâ€™s neck with the twine rope and dragged her on the football field behind their house on the commissioner compound.â€

Bindaâ€™s murder reawakened intense public condemnations over the wave of killings across Bong. Citizens, including women groups and civil society organizations, called on the court to ensure a speedy trial and a logical conclusion of the case.

Bindaâ€™s case is one of many other murder cases that have occurred in Bong in recent years.

Angeline Kolleh, 29, Dorris Nyan, 29, Hawa Gbokolo, and Babygirl Cooper, 39, have all been murdered under different circumstances in Bong.

Perpetrators of some of these murder cases have been prosecuted and are serving jail terms, while in some cases, the perpetrators remain unknown.

Davis and Sulunteh, who were previously held for the murder at the Gbarnga Central Prison, have not yet been released. Meanwhile, Molon is currently being detained and is awaiting his trial.

Bongâ€™s police chief superintendent, Frederick Nepay, told The Bush Chicken on Monday that â€œall persons of interest in the case have been released today.â€ He said Davis and Sulunteh could be released shortly, pending a court order.