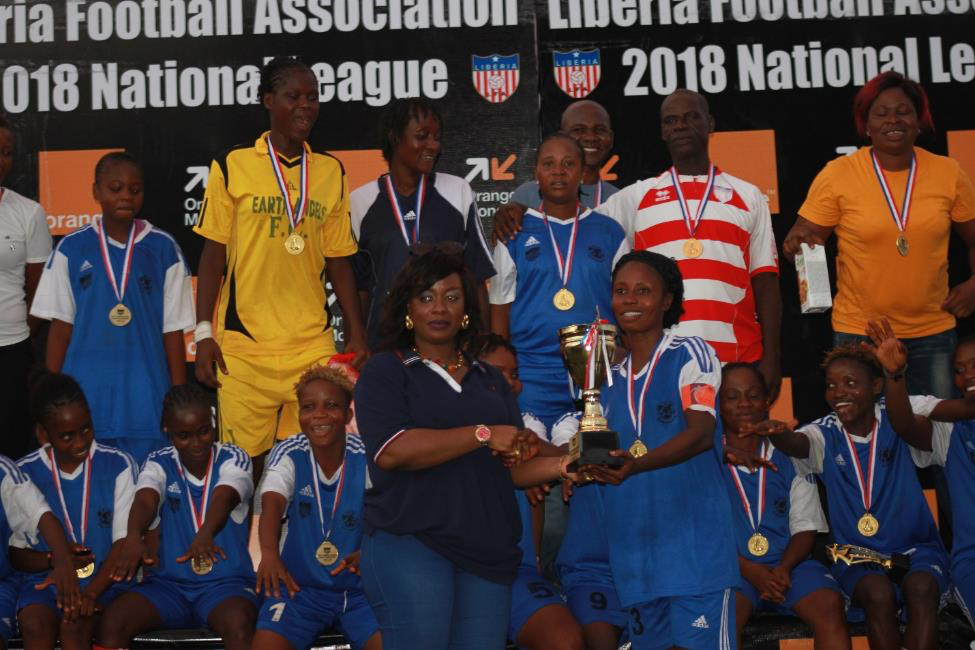 Two weeks after winning the female edition of the Liberia Football Association Cup, Earth Angels scored a 3-1 win over Senior Pro to secure the First Division title for the fifth consecutive year.

Two goals from Kanties Sayee and a goal from star player Angeline Kieh were enough for Earth Angels to tear apart a Senior Pro team that got their lone goal through their striker Bernice Willie.

Senior Pro began the match on a promising note with some attacks that were not fully taken advantaged of, but they conceded a goal in the 27th minute. Kanties Sayee scored with a brilliant finish from Angeline Kieh’s assist to get the Angels ahead.

Kieh who engineered the opening goal, proceed to make her name more known when her beautiful footwork in the 36th minute saw her beating Senior Pro’s defense before beating Tomah Nyemah who was in goal.

Senior Pro went from good to bad on the pitch as the Angels took control of the match. In the second half, it was the Earth Angels who returned stronger with a performance which couldn’t again be matched by Senior Pro. They added their third goal in the 52nd minute and looked relaxed as they went on playing the ball around instead of pushing for goal as they had in the first half.  Nine minutes to the end of the match, Bernice Willie got the consolation goal for Senior Pro. As with the male top league, the females concluded the championship with the awarding of trophies, cash prizes, and individual awards. The Earth Angels bagged a giant trophy, team medals, and a check of L$525,000 (US$3,387). The runners-up, Senior Pro, were awarded a check of L$300,000 (US$1,935) along with medals.

Senior Pro’s consolation for losing the First Division title was the knowledge that four of their players had won individual awards. Their striker, Bernice Willie, walked away with the top scorer award after scoring 20 goals in seven games and Head Coach Naomi Peters was named the league’s best coach. Earth Angel’s star player, Angeline Kieh, won the league’s most valuable player award while Massa Kanneh, who conceded just three goals in seven games for Earth Angels, was named the best goalkeeper.