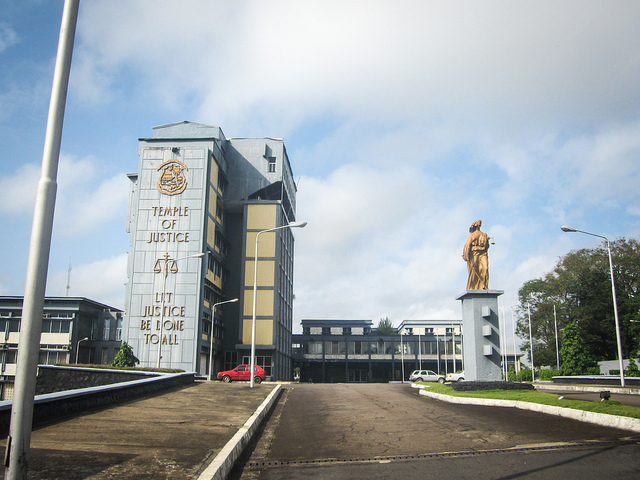 On April 25, the Executive Mansion announced it would be reducing salaries for over 4,000 government workers, including ministers and heads of public corporations. Included among those receiving cuts to their salaries would be civil servants making more than US$1,000.

Three weeks after the presidentâ€™s decision, the Association of Liberian Human Resources Professionals wrote a letter appealing to the president to avoid cutting the salaries of civil servants because it not only violated the Decent Work Act, but it also violated the Civil Service Standing Orders, a rulebook that governs the employment of civil servants.
The organization wrote:

However, the plea of the Liberian Human Resources Professionals fell on deaf ears, and as promised, the government soon began deducting salaries from civil servants, in violation of the law.

The president of the Republic of Liberia, who swore to uphold the constitution and other laws of Liberia, violated the law and got away with it.

But this is not the first time that President George Weahâ€™s government has abused its power, or perhaps, ignorant of some of the laws, committed illegal acts. When Weah first started constituting his government, he not only made appointments that he had no legal authorization to make, he also appointed at least one person who was not legally qualified to occupy the position: the former speaker Emmanuel Nuquay as head of the Liberia Civil Aviation Authority.

Moreover, many of those he appointed as ministers and heads of agencies started performing functions and making decisions reserved for their appointed roles when they had not yet been approved by the Senate. Furthermore, contrary to the Code of Conduct, the president and his cabinet have still not declared their assets.

This is despite the fact that the law requires â€œevery public official and employee of government involved in making decisions affecting contracting, tendering, or procurementâ€ to do so when they transfer from one public office to another, as in the case of Weah and his vice president.

In such cases where we see the law being blatantly ignored, we would expect the legislature to check the powers of the presidency. But partly because of the dauntingly huge mandate Weah received from the people â€“ with 61.5 percent of votes â€“ and probably because they too are involved in illegal acts, lawmakers have not pushed Weahâ€™s administration to respect the countryâ€™s laws.

The Senate approved all his appointments, including that of Nuquay as head of the Liberia Civil Aviation Authority even though he had no background in the aviation industry as required by law.

They also quickly approved his two road construction loan agreements, even though critics raised significant issues about both loans being sole-sourced and one being connected to a friend of the president whoÂ recently gave him a â€œgiftâ€ in the form of a loaner aircraft. Lawmakers did not only approve the loan; they went further and instructed the president to go out and get even more loans for other key roads in the country.

It has become clear that the legislature is not ready to play its balancing role in this instance.

Liberians now have no option but to rely on the judiciary branch to ensure that the Weah administration is held accountable. Unfortunately, because of the nature of the judicial system, citizens need to bring their complaints against the president. The court system will not, on its own, initiate cases against the president. What that means is that the typical Liberian forms of voicing their grievances against their government â€“ protesting and going on radio shows to criticize â€“ will need to give way to filing lawsuits against the government.

These important cases, such as the civil servants unlawfully having their salaries reduced, need to be tried in the courts. Unfortunately, these endeavors can be costly, and for a variety of reasons, individuals may not be able to pursue such cases on their own.

That is why Liberia needs strong public interest organizations that are dedicated to not only ensuring that the rights of citizens are protected, but that government officials are adhering to the constitution and other laws of the land.

In the U.S., whose political system and laws mirror ours so much, organizations like the American Civil Liberties Union have often taken up the mantle to ensure that the government continues to respect the constitution and the rights of citizens. They do this using the court system. The organizationâ€™s website says it aims to â€œfight government abuse and to vigorously defend individual freedoms including speech and religion, a womanâ€™s right to choose, the right to due process, citizensâ€™ rights to privacy, and much more. The ACLU stands up for these rights even when the cause is unpopular, and sometimes when nobody else will.â€

To be fair, Liberia has always needed organizations like this, even before Weahâ€™s government. Even under former Pres. Ellen Johnson Sirleaf, Liberians needed to sue their government to get it to act right. For example, many Liberians have lost family members due to unnecessary road accidents. Most of these accidents are caused by factors that could be prevented if the Ministry of Transport enforced the law and inspected vehicles for safety features before providing them with registration certificates. Wouldnâ€™t it be great to see the government forced to pay victimsâ€™ families compensation and subsequently be instructed to enforce the law?

We, as the media, can uncover these issues, but thereâ€™s a need for these issues to be sustained in public discourse and if warranted, pursued in the courts. That is why Liberia needs its version of the ACLU to protect the rights of citizens and ensure that the constitution is adhered to.