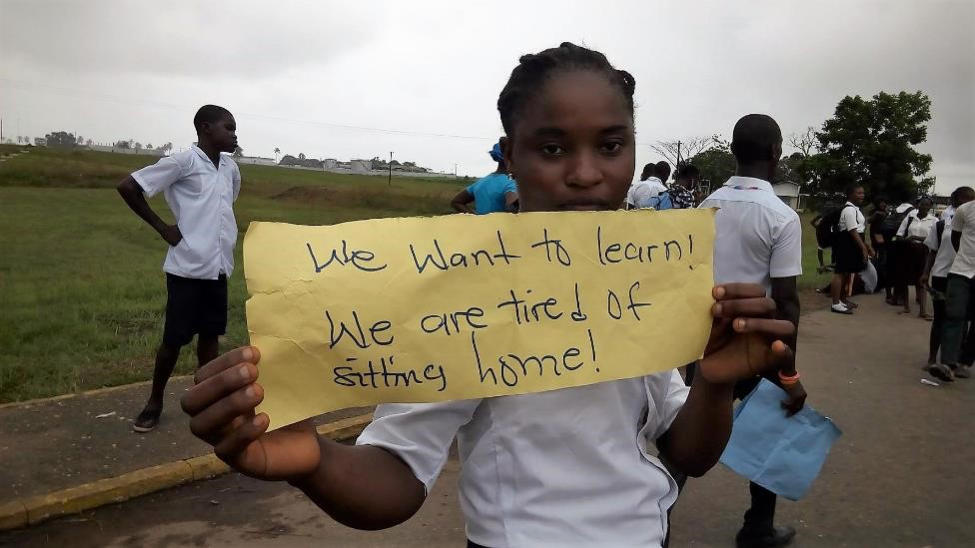 DOLO TOWN, Margibi â€” A Ministry of Education mandate ahead of the Christmas and New Year celebrations that schools remain open until December 22 is receiving mixed reactions in Margibi.

On December 14, the Ministry of Education directed educational authorities across the country to ensure that all schools remain in session until December 22.

According to the ministry, the education system in the country has been in a state of crisis that was worsened by the Ebola epidemic in 2014.

The ministry reported that currently, nearly 40 percent of primary school students are at least three years older than the appropriate age for class the they occupy.â€

â€œOverage enrollment remains a significant challenge at all levels of education,â€ the ministry said in the release. â€œLiberian children do not need any additional disruption that can negatively impact their ability to be productive citizens in the future.â€

The release emphasized the role of the ministry to ensure that Liberian children have access to quality education, adding that it has been ensuring that children are in the classrooms and learning, as part of its efforts to improve the system.

But at least one teacher at the Dolo Town Public School says closing schools late for the holiday break is not sufficient to keep students in the classrooms.

According to Omodu Mollay, there are many other factors that need to be rectified to ensure that students stay in classes, including ensuring adequate instructional materials and seating capacity for students. He said delays in paying teachers are also more likely to disrupt classes and delay studentsâ€™ learning than the long vacations.

â€œI donâ€™t see much difference with closing before or on the 22nd,â€ Mollay added.

He said it is customary that during Christmas and new year celebrations, many families travel to places to observe the holidays, which would require more days prior to the holidays. Moreover, teachers who observe pay delays need to find other means to raise money to enable their families to celebrate the holidays.

He said for the last two months â€“ October and November â€“ he and other public school teachers receiving salaries through saving accounts with International Bank have not receive their salaries. Mollay also told The Bush Chicken that instructional materials at the Dolo Town Public School are limited, while seating capacity for students is low.

He said although the school recently received 34 chairs from the countyâ€™s senator, Oscar Cooper, the challenge still exists. The inadequate seating capacity for students means that there are more students on a bench than should be.

But Mollay said he doubted that the ministry would enforce its order for schools to remain open until December 22.

â€œThere are a lot of mandates the ministry has come up with and people violated without any penalty, including the order that there [should be] no graduation before [students receive] WAEC results,â€ he said.

Torwon Krua, a Liberian residing in the U.S. who visited Dolo Town Public School earlier this year, told The Bush Chicken that he was appalled by revelations made to him by the schoolâ€™s authority that instructional materials had not been forthcoming since the end of the last school year.

Krua described the situation as unfortunate, given that the government had announced a compulsory free primary education policy.

â€œThese are the hallmarks of what they have pronounced, and even school supplies are not forthcoming, then where is the free and compulsory education they are talking about,â€ he said. â€œIt is [nothing] more than a joke.â€

The schoolâ€™s acting principal, David Farkollie, confirmed the challenges at the institution, but said up to 90 percent of the problems with seating capacity had now been addressed. Farkollie also confirmed that some teachers at the school have been complaining of delay in salaries being paid.

On the governmentâ€™s mandate for the closure of school for Christmas and new year, he said the school is fully implementing the order.

â€œIt is a government mandate and we are under the authority of the government, especially [the Ministry of Education], so there is no way we can go against their request or mandate,â€ he said. â€œIf you go against the governmentâ€™s mandate, it means your daily bread will be taken from you.â€

Like Farkollie, the principal of the Harbel Multilateral High School, Jimmy Keyan, has promised to ensure that the mandate is fully enforced.

Keyan said the mandate is necessary to keep students in the classroom, especially when senior students are being prepared for the first official West African Senior School Certificate Exams this academic year. He threatened to use rules contained in the schoolâ€™s rulebook against any student who would challenge the ministryâ€™s mandate. â€œWe have told them, if you stay away from school for even a day, we will penalize you, and you will not walk away scot free,â€ he pointed out.

This yearâ€™s Christmas and New Year vacation will also coincide with the run-off presidential elections, which will be held on December 26, the day after Christmas.

Austin Kollie, a student of the R. S. Caulfield High School, said the late vacation will deny students who registered in towns and counties far away from their schools the opportunity to vote.

He appealed to educational authorities to relax the mandate for the sake of the elections.

Kollieâ€™s appeal seems to contrast with recent appeals by his fellow students, who had often demanded their right to be in the classroom to learn.

In September last year, public school students in Margibi staged a protest demanding teachersâ€™ presence in their classrooms. The teachers had joined a national protest in solidarity with the National Teachers Association of Liberia seeking the resignation of Education Minister, George Werner.

The students set up roadblocks at the intersection connecting Roberts International Airport, the highway to Monrovia, and the road to Firestone preventing vehicle movements.