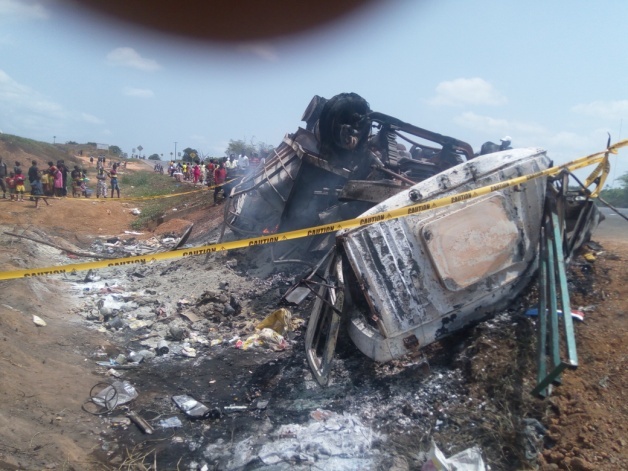 MORRIS FARM, Montserrado â€“ At least eight people are feared dead while over ten others are severely injured as a result of a tragic motor accident involving a mini Ford truck and two commercial motorcycles at Morrisâ€™ farm along the Suakoko Highway on Monday.

According to reports, the incident occurred as a result of the two commercial motorcycles attempting to overtake one another while approaching a narrow curve. The mini truck, reportedly running at a high speed, bumped into the bikes, somersaulting and landed in a drainage.

The vehicle was carrying goods including petroleum products, rice, soda, and building materials, including cement and zinc. It was gutted by fire minutes after the crash.

At least six out of the 28 passengers on board the vehicle are feared dead in the fire, while the two motorcyclists were killed instantly.

The victims are currently receiving emergency care at the C. H. Rennie Hospital. Six passengers in more critical conditions have been transferred for further medical attention to the John F. Kennedy Hospital in Monrovia.

Moses Tokpa, 21, said he witnessed the accident while he was coming home from the field where he molds mud bricks for sale. He managed to rescue seven helpless persons from the blazing fire.

â€œI am feeling too bad because I even tried to save a woman and her babyâ€™s life, but she decided to go back for her cell phone. Thatâ€™s when the fire overpowered her,â€ Tokpa said, with tears running down his face.

Meanwhile, a two-year-old boy who sustained an injury to his head is being treated at the C.H Rennie Hospital as police have yet to get any trace of the mother who was on board the car during the accident.

According to nurses providing him care, his condition is currently stable but he cannot speak clearly. Other survivors have not provided any details about his motherâ€™s identity.

This is the latest of a series of accidents following the rehabilitation and subsequent dedication of the highway that leads from Red Light to Gbarnga.

Last month, six people lost their lives in a tragic accident involving a Toyota pickup and a commercial motorcyclist at the Todee junction along the same highway.

The Bush Chicken recently published an editorial about the reluctance of Liberian authorities, including the Liberian National Police, the Ministry of Transport, and the Ministry of Public Works, to prioritize roadway safety in their policies and actions. Liberia has one of the highest rates of traffic deaths in the world, with 1,448 deaths in 2013.