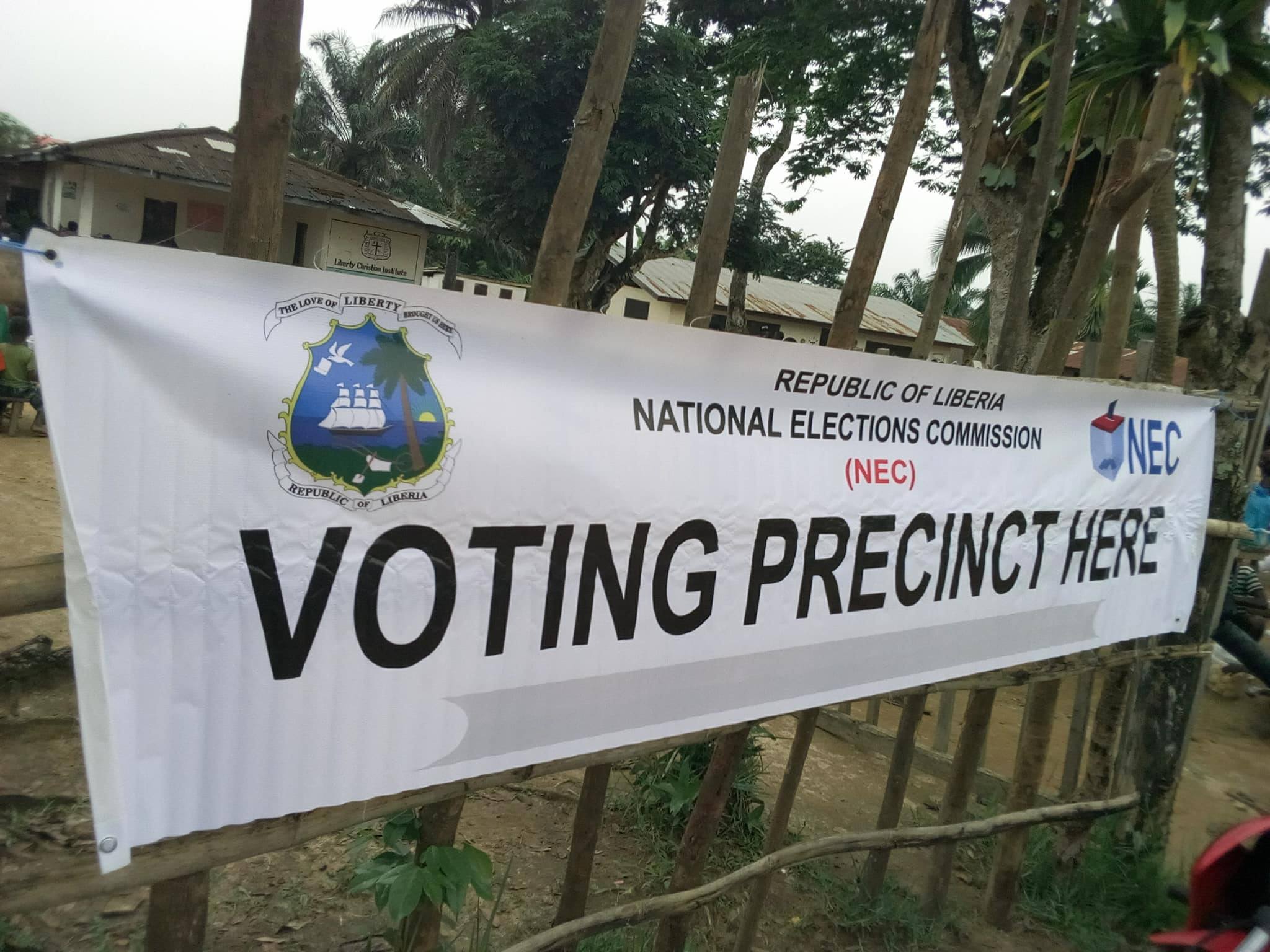 Election Day is finally here and Liberians are preparing to vote to decide who will succeed President Ellen Johnson Sirleaf, in addition to occupants of the 73 representative seats from across the country. Stay tuned as this page will be updated frequently.

The delay in ballot boxes arriving at polling centers in Nimba was mostly resolved by 1:00 p.m.

At some polling centers across the country, workers temporarily closed for a lunch break but at other centers, workers continued working to clear the long queues.

Rain was an issue in at least four counties â€“ Grand Bassa, Nimba, Bong, and Margibi. In those locations, queues that had been formed for hours were suddenly dispersed as voters sought shelter. In Nimba, the rain is now subsiding, allowing queues to form again.

At several polling centers in Montserrado, Margibi, and Grand Bassa, the queue controllers appear to not be as effective in properly instructing voters. In one instance, this resulted in a mother carrying a child being taken from one queue to another just as she had reached the front of the line.

ELBC Radio reported that the national chairman of the Movement for Economic Empowerment had been called for questioning after he was allegedly seen influencing voters with cash. More details to come later.

In Harper, Maryland, voters complained that at least two candidates hovered around polling centers for over an hour. They were later asked to leave to avoid intimidating the voters. In Ganta, several candidates have been whisked away after being accused of indirectly campaigning.

The major issue for this election appears to be that properly registered voters cannot find their names of the voter roll, even if they are at the same location at which they registered.

That led to a commotion earlier in Gbatala, Bong, where several young men blocked the highway in protest. That situation has been brought under control now and the National Elections Committee magistrate in the area has said all voters with valid registration cards, even if their names do not appear on the roll, would be allowed to vote.

We’ll have updates after a press conference that has been called by the National Elections Commission.

Some problems have been observed in Margibi and Grand Bassa with voter names not being found on the voter roll but the National Elections Commission staff have said they will use a system set up to allow poll workers to verify registered voters via an SMS shortcode.

At the Clipperâ€™s Camp polling center near the Roberts International Airport, at least two voters were denied because their NEC-issued voter cards did not have photos. The elections magistrate had previously said NEC would ensure that those voters are allowed to vote after thorough verification. It is not clear whether they will still be able to vote.

Many elderly and pregnant voters across the country have been complaining about the slow pace of the queues. In Harper, Maryland, a polling center near city hall received its materials on time, but voters in line are complaining of the process being too slow. Some want to go home and come back. The same is being recorded in several districts in Grand Bassa and Bong. The situation is made worse because queue controllers at several polling stations are not being proactive in keeping voters in line.

Voting has been generally smooth at five polling centers in the second and third electoral districts in Bong. In Gboata, which is not too far from Gbarnga, some votersâ€™ names are not on the voter roll. However, elections workers say they are doing everything to inform National Elections Commission authorities of the issue.

Polling stations in parts of Nimba (near Sanniquellie and Ganta) have experienced significant delays in polling stations opening. While few stations like the G. W. R. Community Junior High School in the second district opened on time, most of the polling stations near Ganta opened late, with some still not yet open, three hours after the official start time.

At these stations, poll workers could be seen conducting refresher trainings as they awaited the arrival of elections materials from Sanniquellie. The presiding officers in charge of these polling stations are still too busy trying to arrange for voting to start and they were not available to answer questions from the press.

In Montserrado, both Vice President Joseph Boakai of the Unity Party and Sen. George Weah of the Coalition for Democratic Change have voted. In the countyâ€™s 13th electoral district, some agents of political parties were not allowed in the polling center because of limited space.

Election Day is finally here and Liberians are preparing to vote to decide who will succeed President Ellen Johnson Sirleaf, in addition to occupants of the 73 representative seats from across the country.

On Kakataâ€™s Main Street in Margibi, a normally quiet scene at night, activity was seen as early as 4:00 a.m. Â In parts of Ganta, Nimba, voters turned out at the Geolanda High School polling center as early as 5:00 a.m.

By 8:00 a.m., polling centers all over the country where we had reporters stationed were packed including along the Robertsfield Highway, in Buchanan, in Harbel, and in Gbarnga. Members from various security organizations such as the Liberia Immigration Service, the Drug Enforcement Agency, and the Liberia National Police, were stationed jointly at each polling center. At the Liberty Christian Institute in Ganta, members of the African Union observer mission were also present.

The Elections Coordinating Committee, a group of civil society organizations which had over 2,000 observers across the country, had members present at the Harbel Garden polling center. The United Peopleâ€™s Party saw their agents denied entry because their IDs showed different precinct codes. Not all polling centers began voting promptly at 8:00 a.m. The presiding officer at the Harbel Multilateral High School was still reading out the series numbers for the ballot box lockers to observers and agents of political parties past 8:00 a.m. At 8:17 a.m. at the Liberty Christian Institute in Ganta, polling still had not started. At the nearby Josephine Diagbor Elementary School, voting still had not begun at 8:54 a.m. At the Geolanda High School polling center in Ganta, ballots boxes arrived as late as 9:19 a.m.