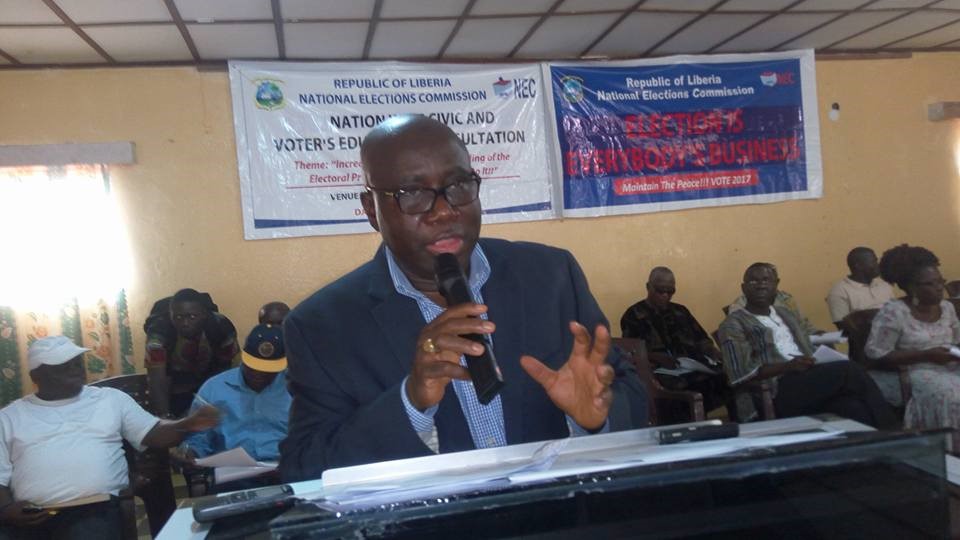 KAKATA, Margibi â€“ Ahead of the 2017 elections, the National Elections Commission has been intensifying its outreach against citizens voting in areas other than where they reside.

During the 2011 and 2014 elections, it was widely thought that politicians were buying votes and transporting voters to the desired electoral districts for registration and voting. Politicians, exploiting the harsh socio-economic conditions faced by some voters, would pay between US$20 to US$40 for a vote, in addition to underwriting transportation and feeding costs.

At a recent forum attended by over 200 people in Kakata, NEC Chairman Jerome Korkoya said the commission takes the issue of voters being trucked into districts other than where they reside seriously. He emphasized that a new provision in the 2014 amendment of the Elections Law bans candidates from trucking in non-resident voters.

â€œItâ€˜s unfair to take a group people from one place to decide the political fate of the people in another place,â€ Korkoya said. â€œItâ€™s the people who know the problem of their community who should decide who they want.â€

However, despite Korkoyaâ€™s insistence that the issue of trucked voters was a crucial one for the commission, NEC did not appear to have a clear way of ensuring that voters were residents within the precincts where they were voting other than by asking community residents to help report imposters.

Meanwhile, the chairman of the Margibi Intellectual Forum, Mohammed Dunor, sees the implementation of the law banning the importation of voters as very difficult due to the proliferation of political parties and the inability of NEC to fully monitor the process.

Dunor said NECâ€™s practice of using elections workers from outside the communities would make it difficult to enforce the new regulation.