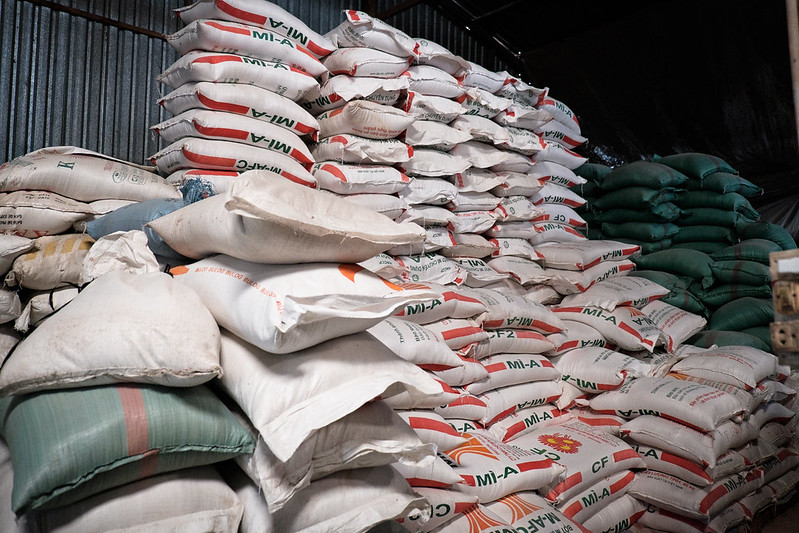 SHAMPA, Sinoe â€“ Amid concerns from the public that the governmentâ€™s state of emergency declaration provided no cushion for the poor and vulnerable in society, the management of Equatorial Palm Oil has donated 1,000 bags of rice to Sinoe for distribution to citizens.

President George Weah announced the state of emergency on March 8, noting that it would be in place for three weeks. The order became effective at 11:59 p.m. on Friday night and restricts traveling between counties.

Many Sinoe residents have worried that this state of emergency will create additional hardships, given that all basic services, especially food supply, come directly come from Monrovia. Pres. Weah did exempt businesses involved in the â€œproduction, distribution, and marketing of food, beverages, pharmaceuticals, and medicineâ€ from the restrictions.

Karmoh Sned, a prominent resident of Greenville, told The Bush Chicken, â€œWe are still afraid of this state of emergency because this is time business people use to settle from us through increasing of prices of basic commodities.â€

Equatorial Palm Oil said it was making the donation to assist the county during the lockdown, even though the company has not been operating for nearly one year due to financial constraints and land disputes with the local communities.

Speaking to The Bush Chicken during the presentation of the donation in Greenville, Baccus Matthew Wiah, the companyâ€™s sustainability manager, said, â€œThough we are not fully and actively operating like before in Sinoe due to some economic challenges, but we deem it necessary this time to render aid to our people â€“ especially the county stakeholders who are partners to us as well who are working tirelessly on a daily basis in making sure that this Coronavirus disease be prevented from and Sinoe.â€

â€œAgain we want to call on our people to join forces with the government in the fight against the virus,â€ Wiah added. â€œLiberia is not better than the other countries where people are dying days and nights. We should erase the perception that the virus is not in Liberia and help educate our people instead of fooling them.â€

Sinoeâ€™s Superintendent Lee Nagbe Chea thanked the company for the gesture. He called on other companies operating concessions in the county to help support the county health team and the security sector.

â€œI want to say a big thank you to our EPO family for this great surprise,â€ Chea said. â€œBut we also want to use this time to call on other companies to do more, mainly to buttress [the] central governmentâ€™s effort to help enforce the work of the health and security sector.â€