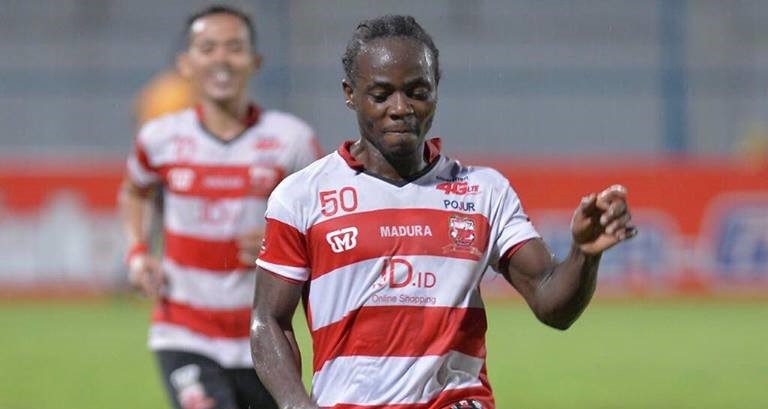 Eric Weekâ€™s Indonesian-based Madura United has kept alive its hope of winning the 2016 league title after collecting its 13th win of the season.

Having failed to get a win the last two league games, the East Java-based club recorded a narrow 2-1 win over Persib Bandung to extend its lead at the top of the 2016 Indonesia Soccer Championship table.

Weeks, who won the man of the match award due to his creating a penalty and scoring the winning goal, was crucial in Maduraâ€™s splendid win over Persib.

Madura took the lead early in the 25th minute from the spot kick after Persib defender Rudolf Basana brought down Weeks within the penalty area. Spanish forward Pablo Rodriguez converted the spot kick to give Madura the much-needed lead on home soil.

Eight minutes after seeing the score leveled, Madura took the lead again through Weeksâ€™s header. The Liberian midfielder scored from Rodriguezâ€™s cross to hand his side all three points.

Weeks, who scored his second goal from eleven appearances, described his teamâ€™s victory as a way of relieving pressure.

â€œWe have had [a]Â difficult time in our last two games, and really wanted to win,â€ he said. â€œBeing at the top of the league and trying to maintain is a difficult thing to do. You have to win constantly, and will continue to work harder to achieve our goal.â€

With the three points collected, Madura continues at the top of the league table with 44 points, four more than second place Arema.