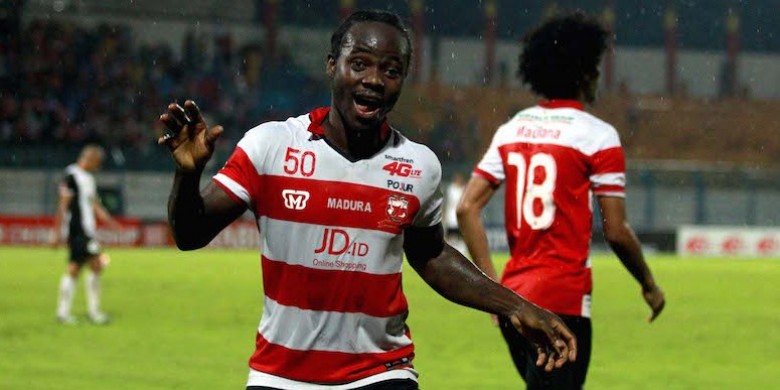 Eric Weeksâ€™ Madura United has kept their hopes of winning the alive after grabbing their 16th win of the league season.

The club narrowly defeated Persija Jakarta by a single goal to keep the pressure on league leaders, Arema Cronus. A strike in the 30th minute from Weeks was enough to hand Madura their much-needed victory at home.

Having lost their previous match 1-0 away at PSM Makassar, and league leaders Arema getting a 1-0 win away at Barito, Madura needed a win against relegated side Persija to keep in contention for the league title.

The match was full of fireworks from both teams that missed out on several golden opportunities. For Madura, they began the match with early pressure and nearly got the curtain raiser in the seventh minutes through Engelberd Sani, who headed a ball wide-off the post.

Despite Maduraâ€™s early pressure, Persija stood their ground and kept pushing on for the opener until the 30th minute when they got punished by Eric Weeks, who took a shot from within Persijaâ€™s penalty area to score the opener that became the match only goal.

The win elevated Madura from third to second on the league table with 55 points from 29 games. They are now level with leader Arema, which has the goal advantage.

With five games to end the league season, Weeks believes his team must keep the fighting spirit if they are to become champions.

â€œWe had a difficult match today, but it was great we were able to win,â€ he said. â€œNow, the league has become more difficult for us. Every match we played is like a final. We have to keep winning because it is the only way we can become champions. We have five games to go, and we will keep the fight.â€

Weeks, who scored his fourth goal from 17 appearances for Madura United, said his primary objective is to win the league. He told The Bush Chicken, it has been his wish to win a league title and will feel hurt losing it in the dying minute.

â€œWe all have a single goal, and that is to win the league,â€ he added. â€œEspecially for me, I want to win it. I believe this is the right time. All my years here in Indonesia, I have been praying for this moment. We are all working harder to land the title. Anything other than winning the league will be bad for me.â€