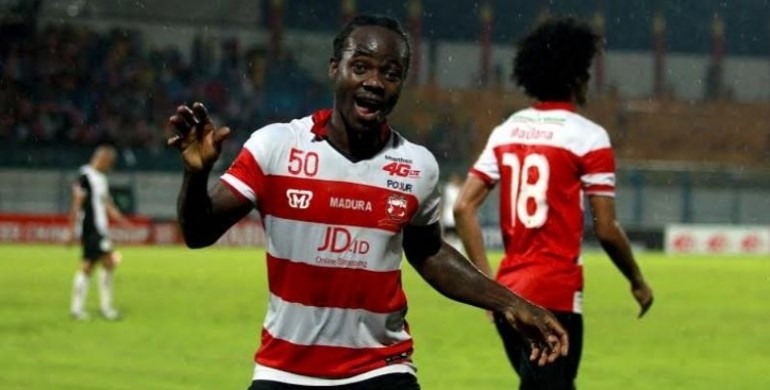 The 30-year-old Liberian scored twice within a week to keep alive his club’s shock bid for the 2016 Indonesia Soccer Championship.

After two games without a win, Weeks scored the winner to push Madura to a narrow 2-1 home win over Persib on October 8 before registering his name on the score sheet five days later as Madura won away to Persiba Balikpapan, the club of fellow Liberian, Dirkir Glay.

Despite playing on the opponents’ turf, Madura proved to be the stronger side with an early lead. The East Java-based club took the lead in the fourth minute through Brazilian defender Fabiano Beltrame who scored with a close range shot from a free kick. Beltrameâ€™s goal was enough to send Madura to the first half break with a lead.

Madura returned from the break the stronger team as they doubled their lead just five minutes into the second half through Weeks, who collected a pass from Serbian-Australian footballer, Dane Milovanovic, and scored with a left foot shot.

With nine minutes to play until the sound of the final whistle, Balikpapan got the consolation goal from the spot kick through Japanese attacking midfielder, Shohei Matsunaga.

The result means Madura has collected back-to-back wins against Persiba Balikpapan, having won the first leg 3-1 at home during the first phase of the league.

The goal was Weeksâ€™ third from 12 appearances, as Madura remains at the top of the league table with 67 points.