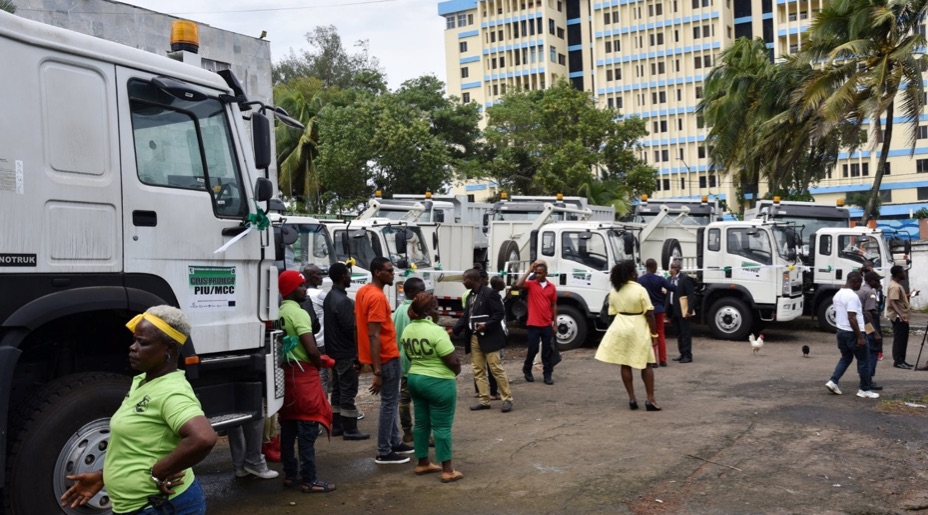 MONROVIA, Montserrado- The city governments of both Monrovia and Paynesville have received huge boosts to tackle issues of waste management that have gradually overwhelmed their capacities.

Large piles of garbage have once again overtaken the two cities after previous efforts by the past administration withered away. Major streets and market facilities are characterized by the huge stockpiles of garbage in Monrovia and Paynesville. Residents and commuters complained of the bad odor and threats it poses to their health.

It was a sign of relieve on Tuesday when the European Union and World Bank jointly presented to both the Monrovia City Corporation or MCC and Paynesville City Corporation also known as PCC several pieces of equipment to help promote improved sanitation and hygiene conditions in the two cities.

It says the pieces of equipment were purchased with funding from the EU and other donors including the United Kingdom and Germany through the Liberia Reconstruction Trust Fund managed by the World Bank.

The EU Delegationâ€™s Head of Corporation in Liberia, Theodorus Kaspers said he is confident that the city governments understand the value of the equipment presented over to them.

â€œOur aim is not only to reduce the rental costs but even more important to make the cities own the waste management,â€ Kaspers said.

The World Bank Operation Officer who officially turned over the equipment on behalf of the donor institutions, Esther Rojas-Garcia said the initiative was the institutionâ€™s support to the government through the city corporations.

Rojas-Garcia stressed the need for sustainability of the waste management program, noting that their goal to provide support is for the development of a sustainable waste management sector that is able to finance itself to operate over a long period of time.

She also congratulated both city governments for preparing their five-year strategic financial and sustainability plans and assured their continuous support to the government.

Monrovia City Major Jefferson Koijee received the equipment on behalf of the city governments. Koijee praised the EU and World Bank for the support and encouraged citizens in Monrovia and Paynesville to take ownership of the support.

â€œWe may continue to have these kinds of support, but it will come to a point where everyone will take ownership of these supports,â€ he said.

â€œWe must not only seek support, but we must also be able to sustain them whenever they are given to us.â€