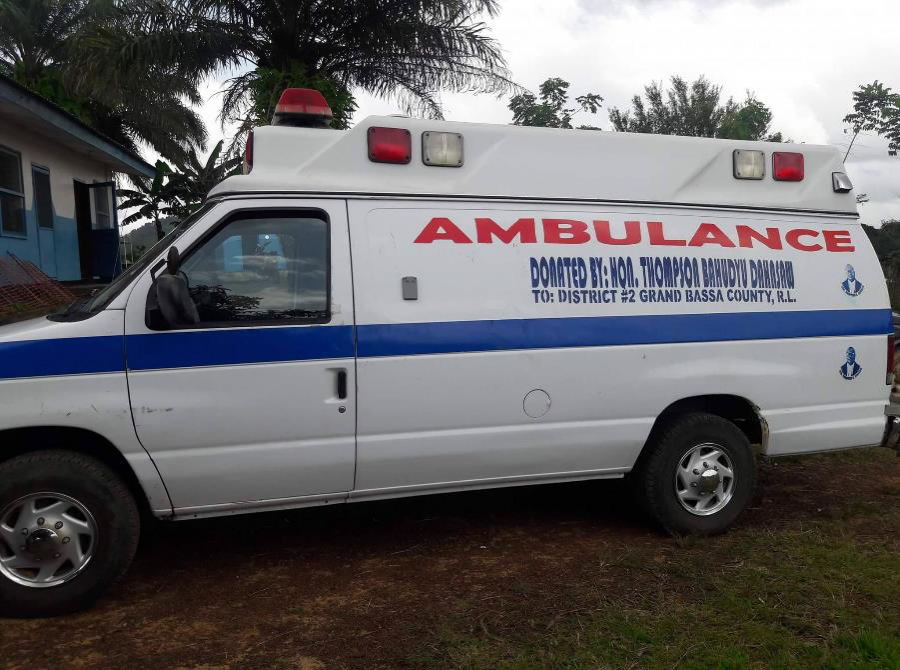 BUCHANAN, Grand Bassa â€“ A losing representative candidate in the second district of Grand Bassa, Thompson Bamyou Dahnsaw, has donated an ambulance to the district.

He said his donation is a fulfillment of a promise he made to help improve the health system of the district.

The American-purchased ambulance was meant to be unveiled during the campaign season but due to a delay in shipment, it arrived late. However, regardless of the election result, Dahnsaw presented it to the district as a means of fulfilling his promise.

â€œI didnâ€™t win the election but I felt the need to give back to my people,â€ he told The Bush Chicken in an interview. â€œI donâ€™t have to win an election to give to my people so I just decided to give them the ambulance so they can know that I have the heart to do whatever it requires for my people.â€

According to Dahnsaw, he was inspired to donate the ambulance when he noticed the difficulty people in the district face in transporting sick people: â€œI was visiting the district with a friend of mine and we were sitting at S.O.S. and I saw five men bringing someone in a hammock and they told me that the guy fell from a tree and I asked, â€˜Where are you taking this guy?â€™ and they told me, â€˜We are carrying him to Waka Town to get a car and take him to the hospital.â€™â€

Dahnsaw said he offered to use his car to transport the sick man but when he traveled back to the U.S., he decided to make an ambulance available.

â€œIn this modern day, no one should be carried in a hammock or be carried by another person to be taken to nearby hospital or clinic,â€ he added.

Dahnsaw said although he did not win the election, his manifesto during the campaign must be implemented which includes youth empowerment and strengthening the health and educational system of the district.

He said the donation of the ambulance is a clear indication of his intention to fulfill his promises made.

At the same time, he congratulated the winner, Rep. Mary M. Karwor, and promised to work alongside her team to develop the district and the county at large.

In recent years, Grand Bassa politicians have now donated a total of three ambulances donated. The first two were done by Deputy Speaker Hans Barchue, followed by Rep. Byron Browne in 2014 during the height of the Ebola crises.

The ambulances are situated at the Liberian Hospital in Buchanan to transport patients from various districts in times of medical emergencies. However, residents of the county still complain that the ambulances often delay getting to the various districts to pick patients, often leading to the death of the ones in critical conditions. Inaccessible roads also make it difficult for ambulances to get to the patients in time.

Some residents believe that if the ambulances reside in the district, it would help reduce fatalities.