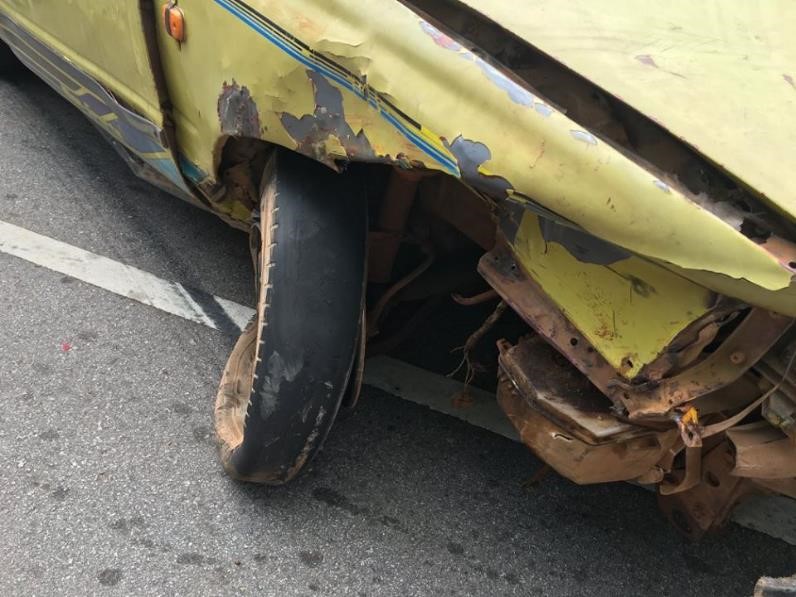 MONROVIA, Montserrado â€“ At a time when the World Health Organization has labeled Liberia as having the second-worst rate of road traffic deaths in sub-Saharan Africa, the countryâ€™s officials appear to not be doing enough to address the public health crisis.

Over the past decade, Liberia has constructed hundreds of miles of major highways, allowing vehicles to travel faster and reducing transport costs and travel time along major corridors. That improvement in speed has also come with unnecessary accidents and the loss of lives, as government agencies have not been enforcing the Vehicle and Traffic Law of 1972.

The law prescribes several measures for ensuring the roadworthiness of vehicles before they are registered, and for ensuring that drivers are properly skilled to operate vehicles. A previous Bush Chicken report noted that the financial cost to clean up and repair the roadways after each accident is approximately US$1,000 per accident, half of which is borne by Liberian taxpayers while grants cover the rest.

But beyond the financial costs, there are real lives being impacted by the failure of government officials to enforce existing laws.

Richard Smith, whose company, IMC Worldwide, is responsible for monitoring the maintenance of the portion of Suakoko Highway that stretches from Gbarnga to the Ganta-Guinea border, said in the past two years of working on the road, he has recorded 11 fatalities from accidents.

One of Smithâ€™s responsibilities is to visit accident scenes and assist police by clearing debris and broken-down vehicles. He also makes recommendations for reimbursement to the engineering contractor repairing the damages. He said his company records information on accidents that require maintenance intervention.

â€œSo, we have details when and a little bit of why these accidents happen and what work is involved in clearing up and the cost associated with that,â€ Smith said. A broken-down vehicle in the driving lane of the road. Photo courtesy of Vehicles of Liberia

All 11 fatal accidents were due to preventable issues. Five were caused by burst tires, three by defective lights, and an additional three were caused by carelessness or drunk driving. He said 75 percent of the reported fatalities were vehicle-related while the remaining 25 percent were due to driver impairment.

More often, accidents on the road are caused by the poor conditions of vehicles plying the route, including worn out and damaged tires. Cases of flat tires, blowouts or tire fires were also contributing factors. Smith said depending on the driversâ€™ speed and experience, these factors have led to many vehicles losing control, thus causing accidents and resulting in deaths and injuries and leaving damages to the road.

He said in some cases, tires of commercial vehicles can be worn down to the wire braiding, which is even more dangerous for safety, because braking can be difficult, especially on Liberiaâ€™s notoriously wet roads.

Besides issues with tires, Smith named inadequate lighting as the second most significant problem with vehicles causing accidents.

â€œWe have vehicles traveling at night with no lights at all,â€ he noted.

Fast-moving vehicles coming upon slow-moving vehicles with defective lighting can easily run into them, causing accidents. Smith said it is an even a bigger problem if a car is stopped on the side of the road at night without lights or indicators and the opposing vehicle also lacks lights.

There are many other issues that Smith has encountered as a cause of accidents, including vehicles without brakes, the dislocation of fuel tanks, poor wiring, and overall poor vehicle maintenance.

In most countries around the world, especially in more industrialized nations, a majority of these accidents can be prevented by regular safety inspections. However, in Liberia, the Ministry of Transport, which has the legal obligation of ensuring that vehicles are inspected before allowing them on roadways, does not physically examine vehicles before registering them, as prescribed by the Vehicle and Traffic Law.

The Liberia National Police, which is responsible for enforcing traffic regulations once the vehicles are approved to ply Liberiaâ€™s roads, admitted to the challenges of enforcing road safety policies. Deputy Police Commissioner John Saah, who is the chief for public safety, confirmed that at least half of the cars currently in the country are not roadworthy, but he said the police did not have a policy to ban such vehicles.

During periodic and on-the-spot vehicle inspections, Saah said the police will often impound vehicles with serious impairment until they are fixed and safe for the road. However, those inspections are rare and consist of the police setting up checkpoints where they review driverâ€™s licenses and vehicle registrations.

Rarely are officers looking into vehiclesâ€™ roadworthiness during these checks. Moreover, drivers can often bribe the poorly paid police officers to get by the checkpoints. Saah said in time past, older vehicles were restricted from plying the streets in the city, something he promised.

â€œWe need to come back with a regulation that will restrict from running in the city. The law says cars should not smoke in the city,â€ the public safety police chief said. â€œBut if you go now to tell a driver that his car is smoking, he will tell you something different, whereby the law says that.â€

Failing to inspect vehicles is not the only lapse of the government that contributes to more accidents than necessary. According to Smith, the road maintenance consultant, accidents are also influenced by unskilled driving and drivers moving vehicles while they are drunk or tired.

â€œIf you improve the things about the vehicles and the drivers, you will get rid of a significant proportion of accidents,â€ he noted.

Geoff Arnold, Smithâ€™s counterpart who works on the stretch of the highway from Redlight to Gbarnga, said although his company has not yet fully analyzed the accident statistics as IMC Worldwide has done, there is a pattern of accidents being caused by drivers ignoring road safety guidelines.

Arnold said the severity of accidents are mostly influenced by excessive speeding.

â€œAlmost 80 percent of drivers on the road do not know the maximum speed limit for driving on the highway and at different locations in Liberia,â€ he said, adding that he also doubts most drivers can properly read the different road signs.

He said the severity and number of accidents could be reduced if road users were educated to adhere to speed limits and road markings. Additionally, he said authorities needed to ensure that a driverâ€™s license is only issued to someone who has passed a driving test.

He said passing a test that demonstrates that a driver can drive and knows the rules and regulations for driving on the highway is important because it allows drivers, cyclists, and pedestrians to make right decisions for situations and locations.

Saah, the police public safety chief, told The Bush Chicken that since the war, testing for applicants for driving licenses do not include testing of physical driving skills.

He said there are currently no cars available to test individuals who apply for licenses.

â€œIn the absence of physical driving, there is a routine they pass through and that routine will tell you, the tester, that this person is qualified to drive or not,â€ Saah said.

He admitted that because most drivers do not read and write, understanding road signs and signals is a serious challenge for them.

While Saah has spent less than a month as head of the Public Safety Department, he has served in related posts in the past government, including as chief for traffic and motor vehicle.

He disclosed that because education for traffic regulations and road usage would help to reduce the accident rate, his office would prioritize programs to increase education and awareness to road users.

â€œWe need to have series of training, series of workshops telling what the highest speed, for example, [is] on the highway,â€ he noted.