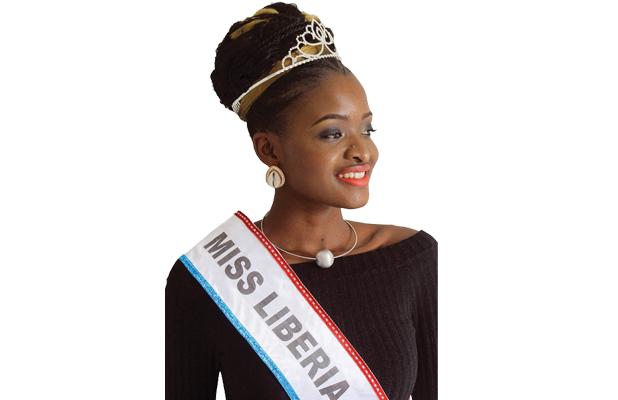 MONROVIA, Montserrado â€“ A reporting claiming the arrest of Miss Liberia 2016 winner Wokie Dolo, has been found to be false.

A blog from metro-uk.com stated on Tuesday that Dolo was arrested at the London Heathrow Airport for trying to smuggle two kilograms of cocaine that were hidden in two bags of coffee packed inside two suitcases.

The report also said Dolo arrived at the airport on an early morning flight and was taken to a private search room by Customs and Border Security Protection police officers on suspicion of trafficking drugs worth more than â‚¬80,000.

It said she was arrested and turned over to Port Authority Police and would face prosecution by the London district attorney on drug smuggling charges.

Dolo has however denied the report and clarified to The Bush Chicken that she has not traveled out of Liberia since she was crowned Miss Liberia.

She termed the report as the work of individuals spreading hate and malice by attaching her personality to vices unrepresentative of her character.

â€œFor the record, I have no police record, let alone [been a] witness to [a] police investigation or to mention drug peddling,â€ she wrote on social media.

She said as a â€œmessenger of peace and conflict resolution,â€ in addition to her dedication to youth development, she completely resists and distances herself fromÂ such unlawful activities.

â€œWhile I hold no malice against the perpetrators of such barbarism, and realizing that physical growth is sometimes mistaken for intellectual growth, one can clearly understand that in spite of the damage these detractors try to mete out against my reputation, I can only leave them to their consciences,â€ she added.

â€œMore so, I believe the greatest weapon in these kinds of tribulations is oneâ€™s ability to demonstrate the kind of leadership and maturity that will confront ego with love.â€

She encouraged people who know her and appreciate her humbled upbringing â€“ especially those whose mentorship will continue to inspire her â€“ to keep the faith and remain strong in spite of the false rumors.

Dolo has recently worked with young people encouraging them to register to vote in the October elections. She assured the public that she will continue to remain resolute and dedicated to being a memorable Miss Liberia.

The issue of fake news is not new and was a hot topic in the 2016 elections in the United States. In Liberia, such news tends to spread even faster â€“ especially on social media â€“ partly because of a less literate population and a more limited knowledge of the public in understanding how the internet works.

Not long ago, a dubious news outlet known as â€œThe BBC Timesâ€ reported that US President Donald Trump had signed an executive order to allow Liberian nationals to travel to the US without visas. For over a week, the fake report was widely shared on social media and was also believed by many Liberians.

The United States Embassy in Monrovia clarified that the report was untrue.

An article written by The Bush Chickenâ€™s Chief Technology Officer and founder of Ducor Sports, Francis Cordor, said that while Facebook and Google are starting to address the problem of the proliferation of fake news, itâ€™s up to readers to learn how to recognize news that are untrue.

Cordor said amid undue prominence gained among big stories in 2016, the proliferation of fake news is a serious problem with real consequences.

He meanwhile encouraged readers and the public to consider the news source to determine its realness.

â€œIs it a legitimate news organization or does it just sound like one? Is it a fake site masquerading as a real site (i.e., ABCNews.com.co)? Is it an organization with a political slant or agenda? For example, expect an alt right perspective from Breibart News Network and a more liberal one from NPR. Though legitimate partisan sites arenâ€™t necessarily sharing fake news, they do have an agenda and tend to share only the good about their side and the bad on the other side,â€ he wrote.

â€œConsider your own bias,â€ Cordor continued. â€œWe all have our own beliefs, but weâ€™re not always aware of them or how we tend to filter information that confirms our beliefs. For example, if you believe the world is flat, youâ€™ll likely follow like-minded people and subscribe to sites that promote articles that support this belief. You may be so passionate about the flat earth that you close your eyes to other views or susceptible to believing anything that aligns with your views.â€

He also warned that readers must be skeptics. He said they must think twice (if not more) before clicking and definitely before sharing.

He said, if a headline seems overly sensational or is enticing to click, one reading must ask himself if he is willing to be manipulated for page views.

â€œDo some basic fact checking. A quick search on Snopes.com or FactCheck.org is easy to do and could be eye-opening,â€ he added.

He encouraged readers to report fake news. â€œReport it,â€ he said. â€œDid you know that you can report fake news when you see it on Facebook? Click the down arrow in the upper right corner and click on Report Post.â€