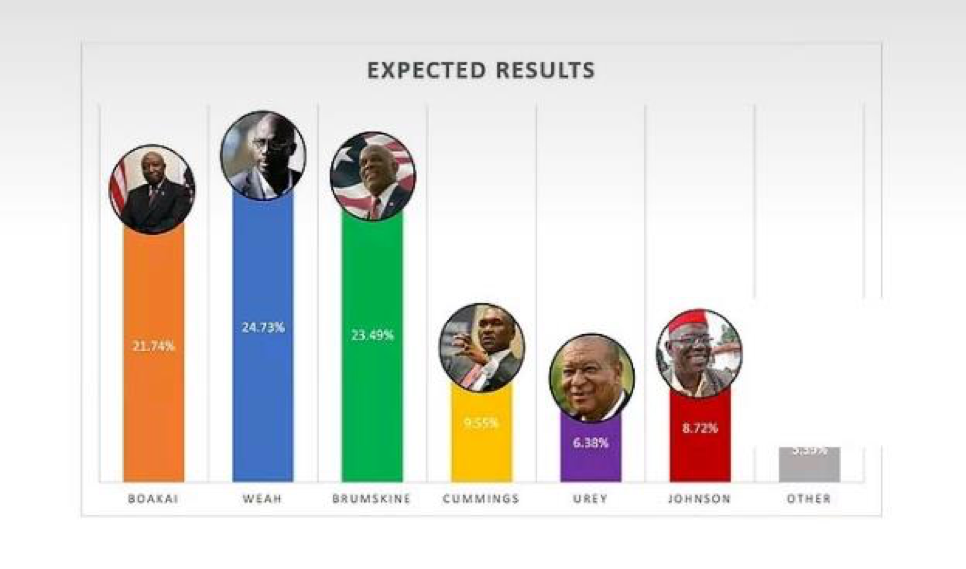 MONROVIA, Montserrado â€“ With just a little over one month ahead of the October presidential and legislative elections, a seemingly fake poll has been circulating in the media, with FrontPage Africa and Facebook serving as the main channels through which it is spread.

Last week, FrontPage Africa reported that a poll conducted by an international organization, International Political Polls, rates George Weah of the Coalition for Democratic Change, first among all presidential candidates, with 24.8 percent of the total samples.

According to the poll, Liberty Partyâ€™s Charles Brumskine is second in the lead with 23.5 percent. The results placed Vice President Joseph Boakai of the ruling Unity Party at third place with 21.7 percent.

â€œThe latest results of this poll were received after the August 17 presidential debate,â€ the pollster indicated.

The survey also indicates that 38.3 percent or 605,900 of the total registered voters in the October elections are still undecided, but the group did not say anything about the sample size of those surveyed.

There were many red flags about the poll, with the biggest being Liberty Partyâ€™s great showing. In no other poll, estimate, or past elections have Liberty Party performed that well, and the results are shocking.

Other red flags create questions about the credibility of the pollster and its survey.

The name of the domain for the pollsterâ€™s website address is registered to Perfect Privacy, LLC, a Florida-based company that conceals the privacy of people who are registering their domain name. Pollsters generally want to defend the validity of their work and such secrecy is unusual.

It was further established that the domain name was also registered on August 15, 2017, just shortly before the polls were supposedly conducted, even though the company says it has been doing work since 2012.

Additionally, the only instance where the pollster is being cited online was the recent article published by FrontPage Africa about its August poll on the pending Liberia elections. This is surprising given the claim that the pollster had conducted national polls in countries such as India and Ghana.

Considering the questionable situation, it’s strange that FrontPage Africa published such report with just a little over a month to the elections. Efforts to have managing editor Rodney Sieh, who wrote the article, to comment on the kind of vetting done on the poll, failed. Others within the news organization refused to comment and directed questions to Sieh.

At the same time, there was no information found about any individual or contact information other than an email address that was found on the pollsterâ€™s website. The Bush Chicken has sent inquiries to the group through the contact but has received no response.

Those inquiries included a request for the full report, in addition to the sample size and the details of the locations where people were polled. On its website, International Political Polls had general information about all the polls including saying that it uses telephone surveys in countries where telephone coverage represents at least 60 percent of the population.

Meanwhile, parties who are shown doing well in the poll, including Liberty Party and the Congress for Democratic Change, have not hesitated to share the results.