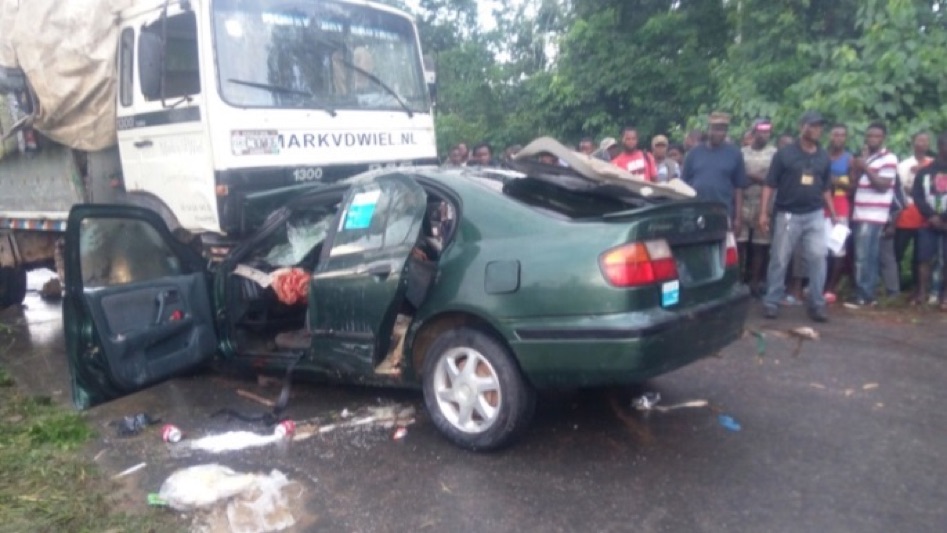 According to eyewitnesses, the operator of the Nissan was speeding from Kakata on Friday afternoon under a heavy downpour of rain and apparently lost control and collided with the truck in the opposite lane.

The victims are split between the C.H. Rennie Hospital and the John F. Kennedy Memorial Medical Center in Monrovia. They are said to be under critical medical conditions.

The identities of the deceased remain unknown as officers of the traffic division of the Liberian National Police in Margibi are investigating circumstances surrounding the fatal crash.

There was, however, no fatality reported from inhabitants of the truck.

In 2016, there were two accidents within a two-day span at the same location. On July 25, an ambulance carrying a patient to the Bong Mines Hospital in Fuamah District was involved in a tragic accident that instantly killed two persons during the Independence Day season.

The ambulance collided head-on with a commercial motorcycle along the narrowly paved highway.

A day earlier, another tragic accident occurred that resulted in the death of three persons who were riding on a speeding motorcycle that attempted overtaking a truck carrying charcoal.

The accident occurred while the motorcycle was overtaking and apparently hit a bag of charcoal that was protruding on the side of the truck, causing the rider to lose control and fall in front of the truck.

Road accidents are prevalent in Liberia. In 2018, the World Health Organization rankedÂ Liberia as having the worst safety record in sub-Saharan Africa, with an estimated 35.9 deaths per 100,000 people.