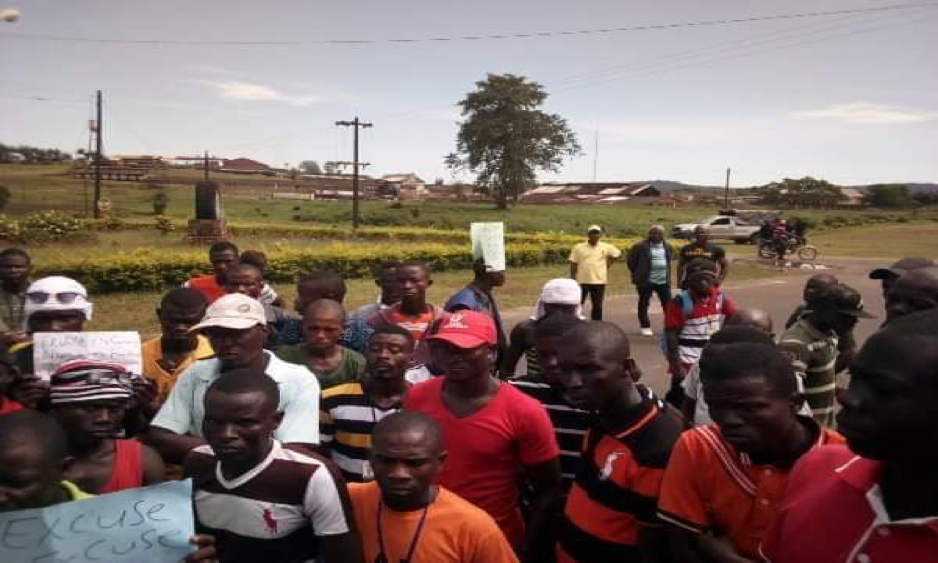 HARBEL, Margibi- Workers of Firestone Estate Department have ended a two-day strike action, following the intervention of the Ministry of Labor and the International Labor Organization. The Estate department in Firestone is hugely responsible for the production of latex.

The workers began their strike action after the company terminated the services of two workersâ€™ representatives for allegedly being absent from work without justifiable cause or explanation. The affected employees are Abel Ngigie, the Chairman of Firestone due payers of the Agricultural Agro-Processing and the Industrial Workers Union of Liberia, or AAIWUL and his Assistant Secretary, Edwin Fallah. Their termination came less than a month after being inducted into office.

The separate communications served to Ngigie and Fallah were signed by Firestoneâ€™s Human Resource Manager, Marion N. Wreh. The company noted in the communications that the two employees missed 10-consecutive days in one month, which violates section 14.3 (d) (vii) of the Decent Work Act Chapter of 2015.

Article 14.3 of the Decent Work Act describes an employeeâ€™s act of being absent from work for more than 10 consecutive days or more than 20 days over a period of 6 months without good cause or explanation as an example of actions that may constitute grave misconduct for immediate termination of employment.

The Firestone management through the communications meanwhile, also asked the affected employees to turn over all its properties in their possession to their immediate supervisors and vacate its housing units if any was assigned to them within 15-days.

The termination of the employeesâ€™ contract generated serious tension on the plantation with several employees calling on local radio stations to condemn the company for its action. But the Firestoneâ€™s management maintained in a meeting with ILO and the bargaining agent of its employees, AAIWUL also maintained its decision against the two employees.

The co-chairperson of the Firestone Workers Coordinating Committee, Levi Sayway revealed that Article 31 of the last Collective Bargaining Agreement or CBA between workers and the management of Firestone allows key leaders of the workers union to dedicate full-time activities to unionâ€™s matters while being paid by the company.

Sayway survived the companyâ€™s dismissal snare because he has lost only 1-day less than his colleagues who lost 10-consecutive days from work in one month. He said the current CBA remains active until this yearâ€™s December, at which time it will expire. Until that is done, he said the workers leaders were not under obligation to return to work.

â€œFrom what I have sensed so far, the management of Firestone Liberia is reluctant in recognizing the Coordinating Committee arrangement on the farm,â€ he noted.

Rodennick Bongolee, a workplace representative and an enthusiastic critic of the past leadership of the Firestone Agricultural Workers Union of Liberia who later merged with AAIWUL have expressed a different view of the situation of the farm.

Bongolee said, while it is a fact that nobody will be happy by the actions taken against his fellow employees, believes that the management of Firestone acted in keeping with the Decent Work Act. According to him, there was no legal reliance given workers to set up a coordinating committee that forbids them from going to work.”

â€œManagement is using the legal means that guarantees AAIWUL as the sole bargaining agent of workers on the farm and not those calling themselves workers representatives,â€ he said.

However, the workersâ€™ spokesman and a workplace representative, Luogan Polley have reminded the company that the days when workers could be seen as slaves no longer exist.

â€œGo and tell Firestone that we are not slaves. We are going to be sitting down until the management of Firestone can reinstate our leaders. Go and tell the government of Liberia if they can bow down to management we cannotâ€ Polley told journalists in an interview.