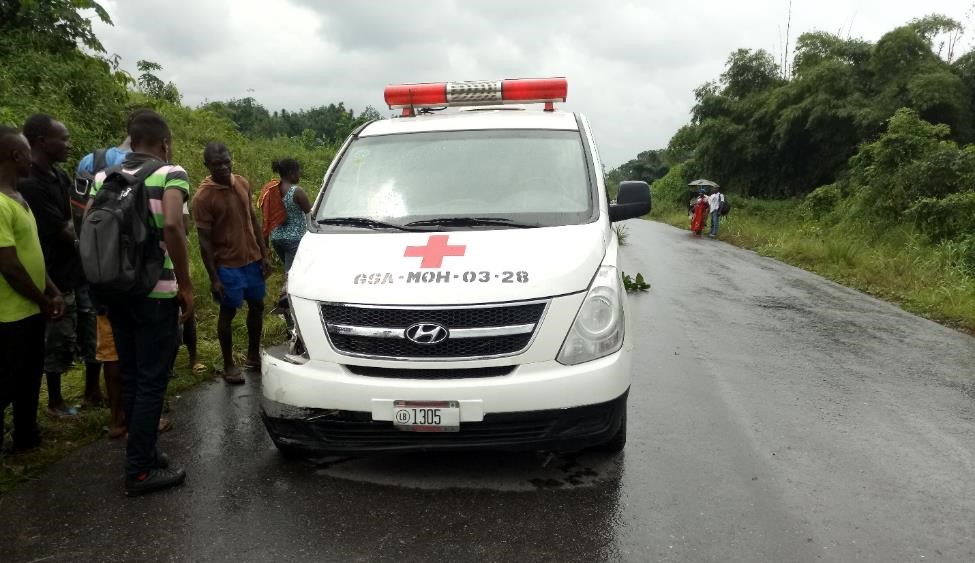 LACKEYTA, Margibi â€“ In a rush to save the life of a dying patient, the ambulance belonging to the government-run Bong Mines Hospital in Fuamah District of Lower Bong was involved in a tragic accident that instantly killed two persons during the Independence Day season.

The ambulance collided head-on with a commercial motorcycle along the narrowly paved Kakata-Bong Mines Highway on Tuesday afternoon the eve of Liberiaâ€™s 170th independence anniversary.

According to eyewitnesses account, the accident occurred when the speeding ambulance collided with the distracted motorcyclist, who had gone to the lane of the ambulance while trying to wave to others at the intersection.

On Monday, July 24, another tragic accident along the Kakata-Bong Mines Highway, coincidentally at the same location. That resulted in the death of three persons who were riding on a speeding motorcycle that attempted overtaking a truck carrying a load of charcoal.

The accident occurred while the motorcycle was overtaking and apparently hit a bag of charcoal that was protruding on the side of the truck, causing the rider to lose control and fall in front the truck. The operator of the motorcycle, Samuel Parker, and a passenger, Francis Kollie, were pronounced dead on arrival at the C. H. Rennie Hospital.

The other passenger on the motorcycle, Bill Kpakeah, died four days later while receiving medical treatment at the John F. Kennedy Hospital in Monrovia.

Mary Kollie, who watched the horrific scenes of both accidents, blamed the accident on supernatural causes.

â€œHow can five persons die at the same place just within two days,â€ she said. â€œThis thing is spiritual.â€

Despite having the third highest rate of traffic deaths in the world, with 1,448 deaths estimated to have occurred in 2013 and 33.7 deaths per 100,000 people, according to theÂ World Health Organization, Liberian authorities have not begun to take traffic deaths as seriously as the government has taken other epidemics. There have been virtually no comprehensive policy statements on how the government plans to tackle this wave of deaths.