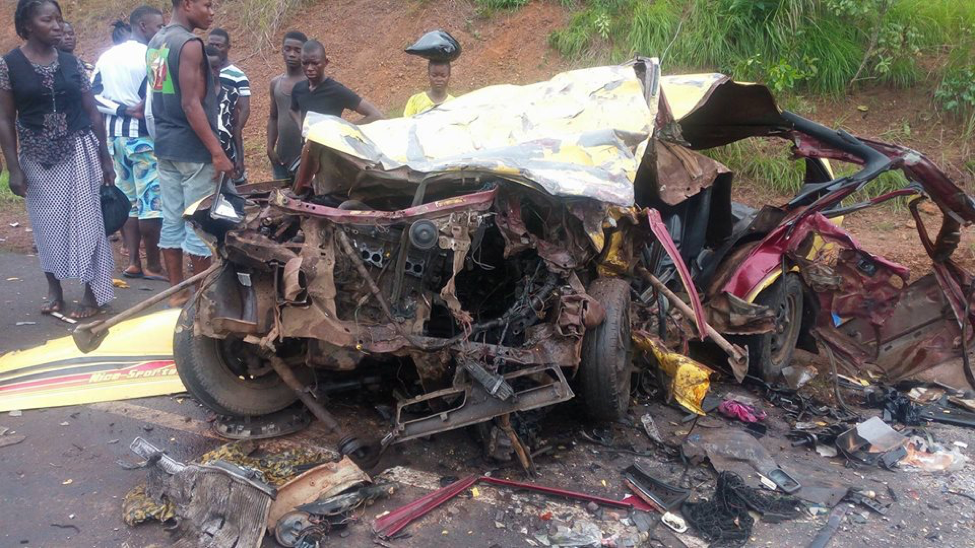 GBARNGA, Bong â€“ At least five persons are reported dead from a tragic accident involving two vehicles along the Gbarnga-Totota stretch of the Suakoko Highway.

The accident involved a white bus and a taxi and occurred at approximately 7:30 p.m. on Monday in Suakoko, Bong.

All four occupants aboard the taxi headed for Monrovia from Gbarnga were pronounced dead by doctors at the Phebe Hospital upon arrival for medical attention after the accident, Inspector Augustine Kannah, Bongâ€™s local traffic chief told The Bush Chicken on Tuesday.

One occupant of the bus carrying 16 persons from Monrovia towards Nimba died in the crash.

The cause of the accident is not yet known, as survivors seek medical treatment at the Phebe Hospital.

Eyewitnesses have, however, proposed that the accident was triggered when the bus driver was overtaking another vehicle, prompting the collision with the taxi, which was coming from the opposite direction.

On Tuesday, police and transport union representatives were seen at the headquarters of the police in Gbarnga, searching the luggage of occupants of the two vehicles to establish identities to match with properties. One elderly woman who lost her sister in the accident was seen in tears at the police headquarters, completing the necessary paperwork to remove her sisterâ€™s corpse from the hospital for burial in Harbel, Margibi.

The well paved Suakoko Highway has continuously witnessed deadly motor accidents, with at least one fatal accident every month.

Kannah is cautioning motorists against excessive speeding to help protect lives and properties.

â€œI am advising our drivers to drive with care because the life you save could be your own or that of your loved one,â€ Kannah said.

Recently, Monrovia city mayor Jefferson Koijee was involved in another accident along the same highway, even though there was no death reported.

In December of 2016, another accident along the highway killed Eddie Zomoway, a lecturer at Cuttington University, and his colleague, Dixon Wreah.

In a previous Bush Chicken article, experts who are responsible for clearing the highway after accidents noted that there is a pattern of accidents being caused by drivers ignoring road safety guidelines.

The experts noted that the severity of accidents is often increased with excessive speeding, adding that the number of accidents could be reduced if road users were educated to adhere to speed limits and road markings and required all drivers to pass a driving test.

Deputy Police Commissioner John Saah, who is the chief for public safety, confirmed that since the civil war ended, testing for applicants for driving licenses do not include testing of physical driving skills.

He said there are currently no cars available to test individuals who apply for licenses.

â€œIn the absence of physical driving, there is a routine they pass through and that routine will tell you, the tester, that this person is qualified to drive or not,â€ Saah said.

He admitted that because most drivers do not read and write, understanding road signs and signals is a serious challenge for them.