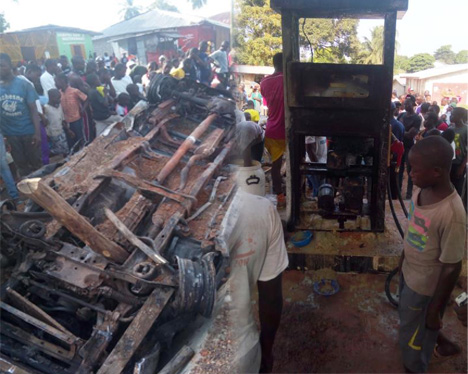 KAKATA, Margibi â€“ At least five persons have been severely wounded with third-degree burns after a fire erupted at a local gas station in Kakata.

The fire started on Saturday, Dec. 11 when Ernest Ihejiemeon drove to the filling station and asked to refill a container in his car that was functioning as his gas tank.

According to eyewitnesses, the attendant refused to pump the gas into the container as he feared that it was not safe. However, Ihejiemeon insisted and decided to pump the gas himself. As he was refilling his container, sparks went off, setting the entire station ablaze.

The fire destroyed the pickup, along with other items, including food, 60 pieces of plastics chairs, and a set of speakers.

Speaking to reporters from his hospital bed at the C.H Rennie Hospital, Ihejiemeon, a pastor, blamed the situation on the devil.

â€œMany of us pastors have enemies, especially as a foreign national like me who is making progress here,â€ the Nigerian national said. â€œItâ€™s obvious that people will target me with evil deeds.â€

Despite the severity of his burns, Ihejiemeon, who heads the Light of God Church, signed a voluntary waiver to be discharged from the hospital on the same day of the incident in order to honor his traditional wedding ceremony, which was scheduled for the same day.

Meanwhile the manager of the local filling station, Victor Flomo, has described the fire as a setback to his business. He put the loss at over US$12,000. It is unclear who will take responsibility for the damage as investigations by the Liberia National Police and the Liberia National Fire Service are still pending.