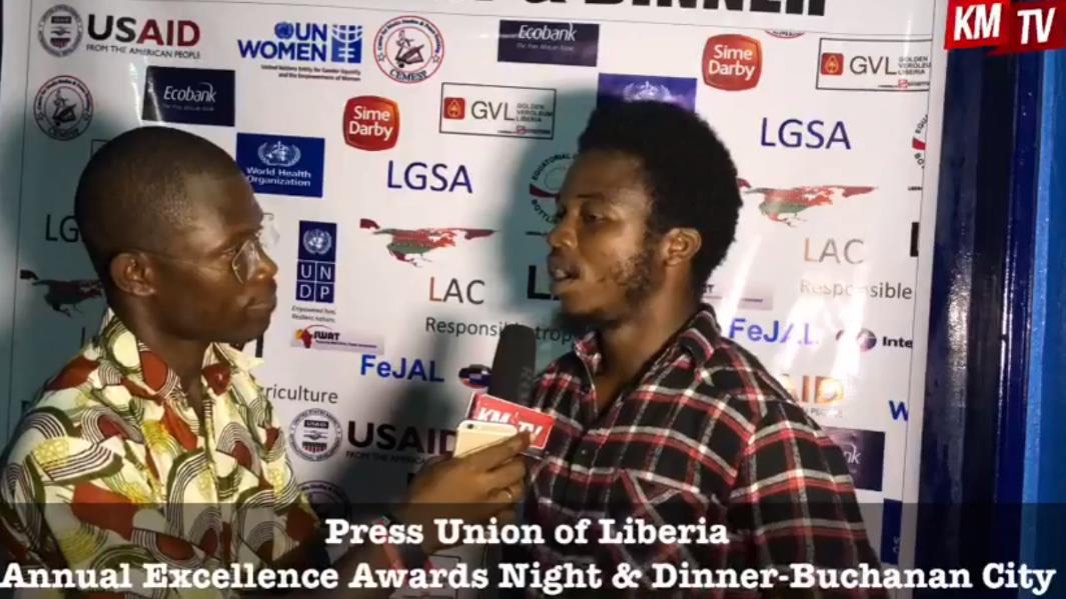 BUCHANAN, Grand Bassa â€“ The Bush Chicken has received the most awards of any media institution at this yearâ€™s awards event held in Buchanan, repeating the feat that was accomplished last year.

The Bush Chicken won four awards given out by the Press Union of Liberia, which is more than any other single outlet received on Saturday.

The outletâ€™s sports reporter, Kla Wesley, was recognized as the Sports Journalist of the Year, while its Maryland reporter, George Momo, won the Human Rights Reporter of the Year award. Sampson David, who reports for The Bush Chicken in Grand Bassa, was celebrated for outstanding reporting on the County Social Development Fund. Gbatemah Senah, who won three awards last year, was also recognized as the Land Rights Reporter of the Year.

The Bush Chickenâ€™s publisher and CEO, Jefferson Krua, said it was a great achievement that his institution was recognized for the second year as Liberiaâ€™s best news outlet by having its reporters win the most awards of any institution in the country.

â€œItâ€™s a testament to the amount of work and integrity we have been putting forward,â€ Krua noted.

The press union also presented awards to the best community radio stations in each of the 15 counties. The winners included Radio Kakata in Margibi, Radio Bong Mines in Bong, Peace FM in Grand Gedeh, Voice of Rural Montserrado, Radio Bomi, Radio Cape Mount, Radio Dugbar in Grand Bassa, River Cess Broadcasting Service, Voice of Karn in Nimba, and Voice of Lofa, Radio Kpoo in Gbarpolu, Voice of Pleebo in Maryland, Radio Gee of River Gee, and Voice of Grand Kru. No station in Sinoe was announced as winner because the nomination forms had not been collected, according to the awards committee.

Meanwhile, The Bush Chickenâ€™s CEO is calling on the Press Union to improve on transparency in its awards ceremony. Krua said as a body that seeks more transparency and integrity from government institutions and society, the press should also practice the same.

â€œThere could have been a lot more transparency with the awards. The awards committee should consider publishing a list of finalists and winners, in addition to including the actual journalism piece for the public to read or listen to,â€ he said.

He added, â€œEven further, an anonymous summary of the points tallying that was used to rank and grade entries should be released to show how the winners were determined.â€

According to him, doing so would help demonstrate that the press union is not only demanding transparency and accountability, but that it is also practicing the same.

He added that doing so would also remove a lot of the controversies in terms of the selection of winners.

â€œI have not verified, but I heard that most, if not all of the community radio winners were official partners of Internews, which was a sponsor of the awards ceremony. This promoted concerns of tampering with the results or suggesting that Internews had too great of an influence of the awards,â€ he said.

He said showing clearly how the stations won would put some of those concerns at ease.

The Bush Chicken is a high-quality media outlet dedicated to in-depth news and analysis on Liberiaâ€™s current events, development, and state of affairs. It was launched in 2015 with the aim of bringing dynamism to the Liberian media by producing properly researched and well-written news articles and paying reporters decent wages to ensure to avoid minimal conflicts of interests in articles they write.

Sharing
Tags Press Union of Liberia
Contributions to The Bush Chicken are not tax deductible.