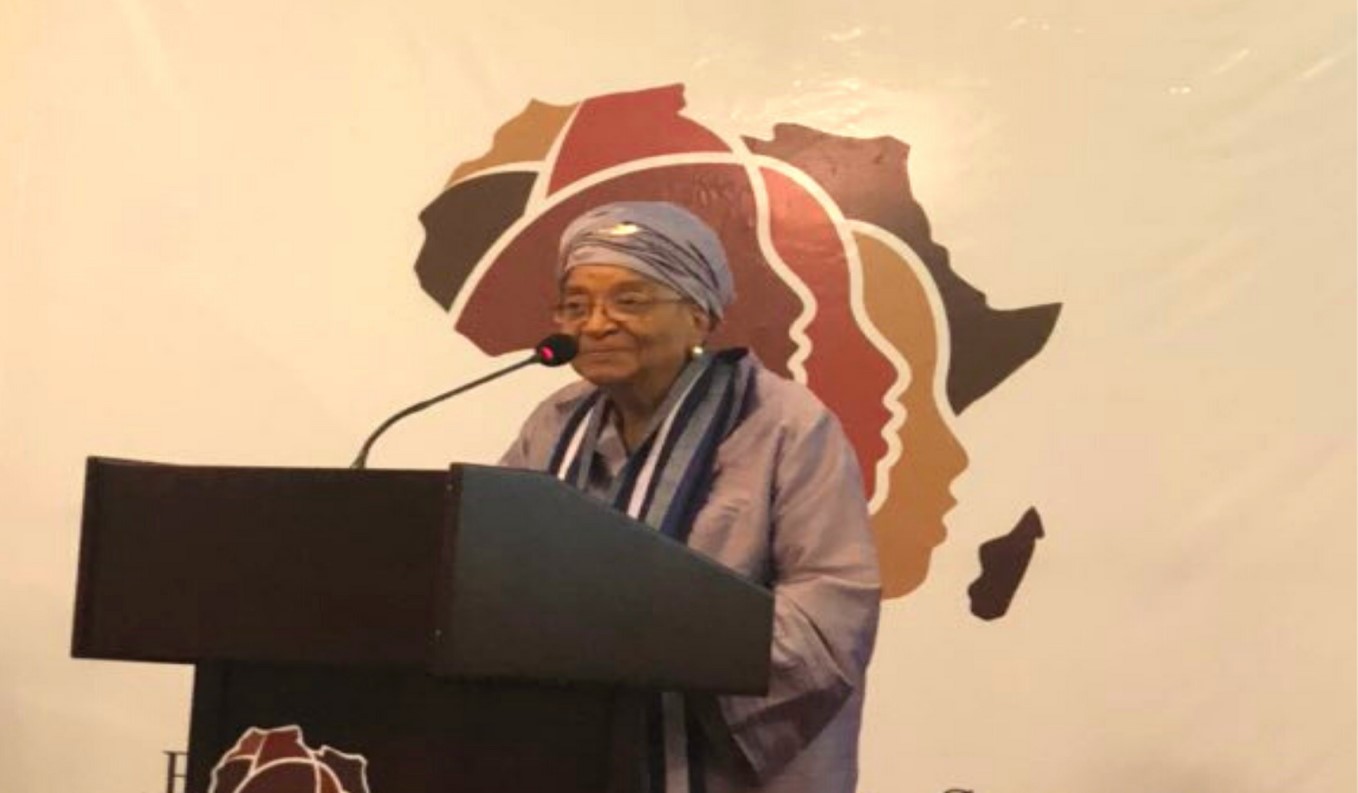 It was originally founded in 2018 to be a catalyst for change across Africa by helping to unleash the untapped powers of women.

After winning the 2005 presidential election, Sirleaf was inaugurated as the first elected head of state in Liberia and Africa. She led Liberia for two successive six-year terms and peacefully turned over power to her successor, George Weah, in January 2018 â€“ the first handover from one elected leader to another in decades in Liberiaâ€™s history. Sirleaf was later awarded the US$5 million Ibrahim Prize for Achievement in African Leadership.

Sirleaf is credited with restoring Liberiaâ€™s image on the international stage, securing debt relief in billions of the countryâ€™s bilateral and multilateral obligations, establishing and strengthening legal and institutional frameworks in Liberia, and restoring basic social services to key parts of the country, including health, education, electricity, and water.

The Sirleaf administration also made credible strides in connecting major cities through road rehabilitation and the construction of new ones, including the Suakoko Highway which now connects four of Liberiaâ€™s largest cities including â€“ Monrovia, Kakata, Gbarnga, and Ganta.

But despite her numerous accomplishments, by Sirleafâ€™s own admission, she failed to make headways in key areas such as ensuring that ordinary Liberians could benefit more from investments in the economy, taming corruption in the public sector, and promoting national reconciliation for a war-ravished nation scarred by memories atrocities and mayhem.

She was also criticized by not doing enough to advance womenâ€™s rights. However, in her retirement from politics, the 2011 Nobel laureate is attempting to right this wrong and is taking on this task of supporting the next generation of women in public life across the continent.

Through a blend of programming, advocacy, and research, her presidential center hopes to become the premier institution dedicated to advancing and sustaining womenâ€™s public leadership and social development across the continent.

The centerâ€™s inauguration was also marked by the launch of its flagship program â€“ the Amujae Initiative. Amujae is a word in the local and regional Kru language, meaning, â€œWe are going up.â€ The word, she says, signals the Centerâ€™s mission to inspire and prepare women â€œto unapologetically take up roles in the highest echelons of public leadership across Africa, and to bring other women along.â€

Speaking at the ceremony on Sunday, Sirleaf revealed that the effort was a fulfillment of the promise she made when she received the Ibrahim Prize in early 2018.

â€œI said, this restless soul cannot rest as there is more work to do,â€ she recalled.

â€œThose sentiments say why I am here today. And no doubt, why you all have kindly accepted to be active participants in this bold endeavor. Regardless of our ages, or where we come from, we are the same. We have so much more to do to lift women up in our own countries, in Africa, and around the world.â€

She also noted, â€œWe are a proud bunch here.Â  We are ambitious, driven, and unrelenting. But we also have our fears, and self-doubts and only pretend to wear those â€˜thick skins.â€™ And we recognize that when we put ourselves in the public arena, we may lose control of our own narrative, and therefore must hold tight to our beliefs and values.â€ 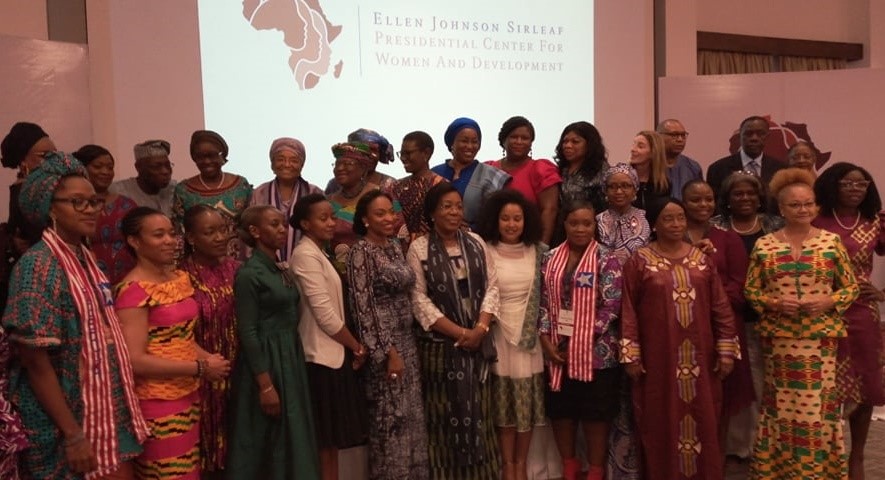 Cohort one members of Amujae Initiative pose with some current and former leaders on the African continent. Photo: Gbatemah Senah

At the launch, the former president detailed the ambition of the Amujae initiative in helping capacitate women across the continent achieve their goals in political life and public service, as well as to provide a lift for emerging public leaders.

â€œWe aim to create a real and virtual space where women and girls can learn from, and lean on, one another, a network with peers across the continent. A place to gain skills in leadership organization, fundraising, research and polling techniques, and most importantly, become each otherâ€™s advocates and storytellers,â€ she said.

â€œSuch a place â€“ a sense of true belonging â€“ is something that I never had. And I know it did not exist for my dear sister Joyce Banda from Malawi. And Joyce and I have our war wounds to prove it! We both had to prove â€“ over and over â€“ that an African woman was capable of being a leader â€“ in a corporation, in a political party, and finally as head of a nation.â€

The former president insisted that the old ways of the past must end, and must give way to a new dawn that promises greater participation and brighter futures for girls and women who desire to become leaders and change-makers. But women and girls must also assert themselves and move from the margins of irrelevance to the center of governance and political power, with a resolve to bond together in unity despite their diversities, for the achievement of a common good.

â€œAnd today, we extend our hand to each other, we teach the hard lessons we have so painstakingly learned, we mentor young women, we pull each other up, help each other along. We move together. I am also proud that as patron, we will work with the African Women Leadership Network as a strong partner in this endeavor,â€ Sirleaf said.

Fifteen participants forming the first cohort of â€˜Amujae Leadersâ€™ were recruited from more than 10 countries on the continent, with backgrounds in law, government, business, education, and advocacy. They include Liberiaâ€™s own Kula Fofana and Cornelia Kruah-Togba, two young women who made head waves recently when they contested Senate and House races in Liberia, respectively.

Their achievements vary as do their origins. But the members of the first Amujae cohort have one purpose in common: to serve their communities and nations and to advocate for their fellow women and fellow citizens.

Hosted by the center, in collaboration with Big Win Philanthropy, participants at the first Amujae Forum will be coached and mentored by some of the continentâ€™s most prominent public leaders. They will also receive training from leading experts in communications, advocacy, planning, and finance.

In addition to the Amujae Initiative, the Ellen Johnson Sirleaf Presidential Center will also host a Library and Archive containing records of Sirleafâ€™s public life and achievements. The center will be headed by the former University of Liberia president, Ophelia Weeks, as executive director, and Sirleafâ€™s former presidential legal advisor, Seward Cooper, serving as chair of its board of directors. Board members include prominent Liberians and non-Liberians, including former education minister George Werner and politician Alexander Cummings.

With this library and archive, Sirleaf will become the second only to President William V.S. Tubman to establish a private collection of personal, official, and state papers and records covering the period of their presidencies. Tubman ruled for 27 years, compared to Sirleafâ€™s 12.

President George Weah also spoke at the ceremony where he said the Sirleaf Presidential Center would be the first of all presidents since the nation got independence in 1847. But Weah was apparently forgetful of the William V.S. Tubman Museum and Presidential Library in Totota, Bong, which existed before the civil war.

Weah said further, â€œIt will not only archive the papers and documentation from her career and presidency, but will also chronicle her activities for the empowerment and protection of women, and serve as a springboard for the continued promotion of her causes and interests.â€

â€œI, therefore, want to use this opportunity to assure the former president that my administration will give its fullest support to such a worthy endeavor. Rest assured of my commitment to working with you in advancing the empowerment and development of women.â€

Liberian women have lead critical areas of society, he said. And unless society makes it easy for them to obtain similar opportunities as their male counterparts and influence developments at all levels of society, the country will continue to struggle to achieve democracy, lasting peace, national objectives, and a â€œwholesome, functioning societyâ€ it so desperately craves.

The founder of Christ Embassy, Pastor Chris Oyakhilome, sent messages of support to the former presidentâ€™s initiative and made an initial commitment of US$1 million to the efforts.