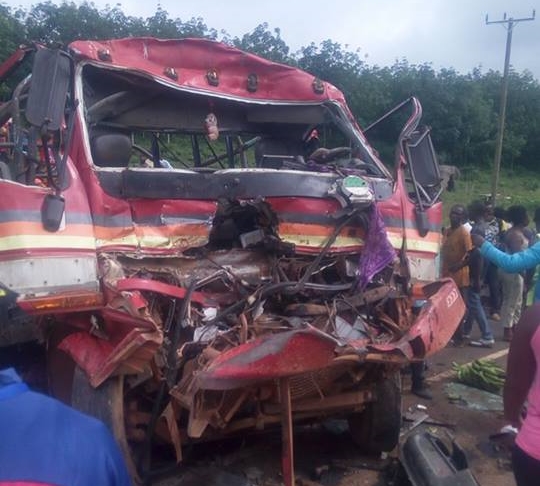 WEALA, Margibi â€“ At least four people have been killed in two separate fatal motor accidents on the Weala-Kakata highway in less than two weeks.

On Sunday, around 2 am, two people met their untimely death as a result of a tragic accident involving a cab motor that ran into a broken-down truck carrying several pieces of plank at Senator Oscar Cooperâ€™s farm along the stretch of the Suakoko Highway between Weala and Kakata.

According to reports, the driver of the vehicle, along with the conductor were instantly killed as the truck, which was carrying passengers and goods, was apparently driving at a high speed before unexpectedly bumping into the truck.

The driver and the conductor were pronounced dead on arrival at the C. H. Rennie Hospital. A lady who was also riding with the two deceased in the front of the vehicle is currently seeking medical care at the John F. Kennedy Memorial Hospital.

Two weeks ago, a Ford Explorer pickup collided head-on with a Nissan Almera at a narrow curve resulting in the death of the Nissanâ€™s driver and a passenger on board as well as seriously injuring three other passengers on board the Nissan taxicab.

Police of Margibi are yet to identify one of the deceased, an elderly man whose remains are currently lying at a local funeral parlor without any trace or means of establishing his identity.

â€œWe did not find him with anything such as phone or ID card. Apparently, his phone was stolen during the accident,â€ a traffic officer told The Bush Chicken.

The Madam Suakoko Highway has seen a series of tragic motor accidents since it was rehabilitated and subsequently dedicated less than a year ago.

The alarming rate of accidents in the first quarter of 2017 has sparked serious debate among road users for the government to put in place measures to better ensure the safety of road users in order to minimize the loss of innocent lives.

The Liberia National Police documented 67 deaths as a result of road traffic accidents for the first quarter of 2017 (January to March). Last year saw about less than half that same amount of deaths being recorded â€“ 34.

The policeâ€™s Public Safety Section attributes the considerable rise in the number of road traffic accidents in the country to the lack of driver education, inexperience on the part of some vehicle operators, drunk driving, and bad road conditions.

Police accident reports also put the total number of individuals sustaining injuries of different degrees during the first quarter at 507, while 592 vehicles were damaged in the accidents.