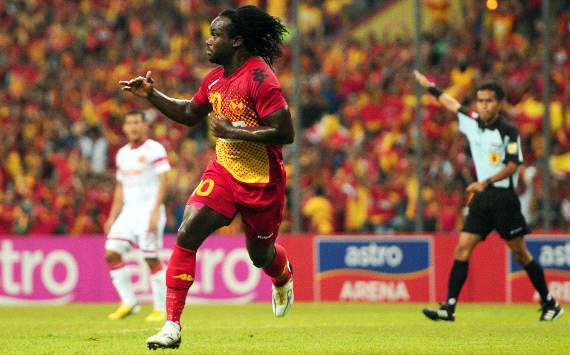 The transfer to Selangor will be Doeâ€™s sixth transfer between five different clubs since moving to Malaysia in 2012, after his short spell with Egyptian Premier League Club Al Ahly SC.

After a year with Selangor, he was released and had to look elsewhere to continue his professional career. The 2014 season with Kelantan turned out to be one of Doeâ€™s worst years. His five league goals in 26 league games were not enough to convince the management of Kelantan to keep him on the team, and he was cut.

Doe returned to scoring ways in 2015 with NS Matrix in the second tier of Malaysia Football, the Premier League. He ended the season by winning the Premier League Golden Boot Award with 17 league goals in 25 appearances. Despite Doeâ€™s good scoring form, NS Matrix missed out on a promotion to the Malaysia Super League, and Doe, who was itching to play at a higher level of competition, had to depart the club at the end of the season.

The 31-year-old striker joined Malaysia Super League side, Felda United Football Club for the 2016 season. He continued his goal-scoring spree, netting 15 league goals in 19 appearances. However, he was shown the exit following the return of Felda Unitedâ€™s forward Thiago Augustos Fernandes, who was loaned to Kedah FA.

Doe has replaced fellow Liberian Patrick Ronaldinho Wleh, whose loan deal with Selangor came to an end in November 2016.