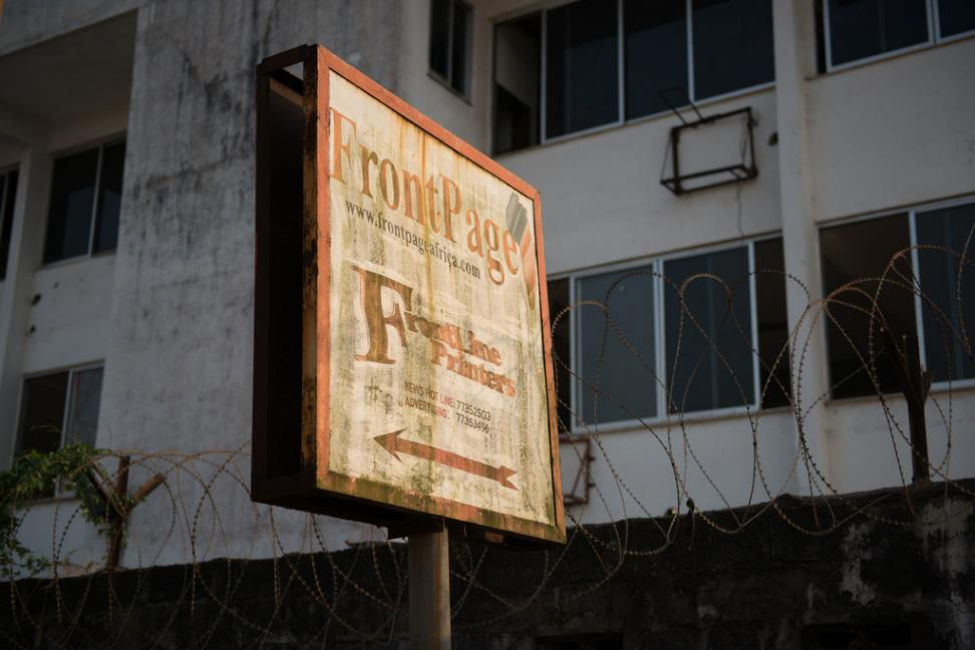 MONROVIA, Montserrado – FrontPage Africa, Liberia’s largest daily newspaper, had its offices closed on Monday, April 9 due to orders from a civil court in Monrovia.

Several staff of the organization were rounded up by sheriffs, who had gone to effect the court’s order.

Lennart Dodoo, a news editor of Frontpage Africa, told The Bush Chicken that the lawsuit filed against the paper is as a result of an erroneous survey advertisement published in the paper.

According to Dodoo, a third party had paid to advertise within the paper. The advertiser and the two men now suing FrontPage, Henry A.K. Morgan and Moses T. Konah, were both joint administrator to a land.

After a dispute, Dodoo said the third party decided to advertise in multiple newspapers and on radio stations that Morgan and Konah were no longer associated with the property and that the public should avoid dealing with Morgan and Konah with respect to the land.

“A week after we published the announcement, we received a letter saying the information was incorrect and that we should do a retraction in the interest of peace and harmony,” Dodoo said, adding that the letter was received on March 22.

Dodoo said FrontPage complied and published the retraction in its March 23 edition. He added that FrontPage did not hear back from the Morgan and Konah until April 9, when its staff was arrested, and its offices were ordered shut.

The Bush Chicken gathered that the newspaper is being sued for US$1.5 million.

Dodoo said Pearl Brown Bull, the lawyer representing the newspaper, was able to secure the release of all staff by 4:00 p.m. on the same day. A hearing is scheduled for Tuesday, April 10, he added.

Following the arrest of the newspaper staff, the news went viral on social media that the government was responsible. However, government officials sought to clarify that they were not involved.

“The arrest of some staff and closure of FrontPage Africa was not on the orders of the government,” Information Minister Eugene Nagbe wrote in a press statement.

According to him, contrary to erroneous claims that inundated social media platforms and other news outlets on Monday, the legal lawsuit against the entity was of a private nature.

“The government wants to reemphasize its commitment to free press and freedom of expression,” Nagbe noted.

However, FrontPage is insisting that the government had a hand in the arrest. Dodoo noted that the newspaper had been the target of several civil lawsuits in the past but that has not led to arrests.

“In the past, they invite us to court, we go to court,” he said, adding that usually, plaintiffs would write their lawyer and the issues would be resolved without a need for arrests or the closure of FrontPage’s offices.

Even more suspicious, Dodoo said, was the fact that the erroneous announcement was also published in the Daily Observer, and other newspapers, in addition to being read on several radio stations. However, only FrontPage appears to have been targeted by the lawsuit.

Moreover, Dodoo said FrontPage was sued as a second defendant, but the primary defendants – Henry V. L. Morgan, Edwin A. Morgan, and Gbein Morgan – had not been arrested. They had initially placed the advertisement in the press.

Henry A. K. Morgan, one of those suing FrontPage, coincidentally, ran for a representative seat in 2011 in Bomi on the Congress for Democratic Change ticket.