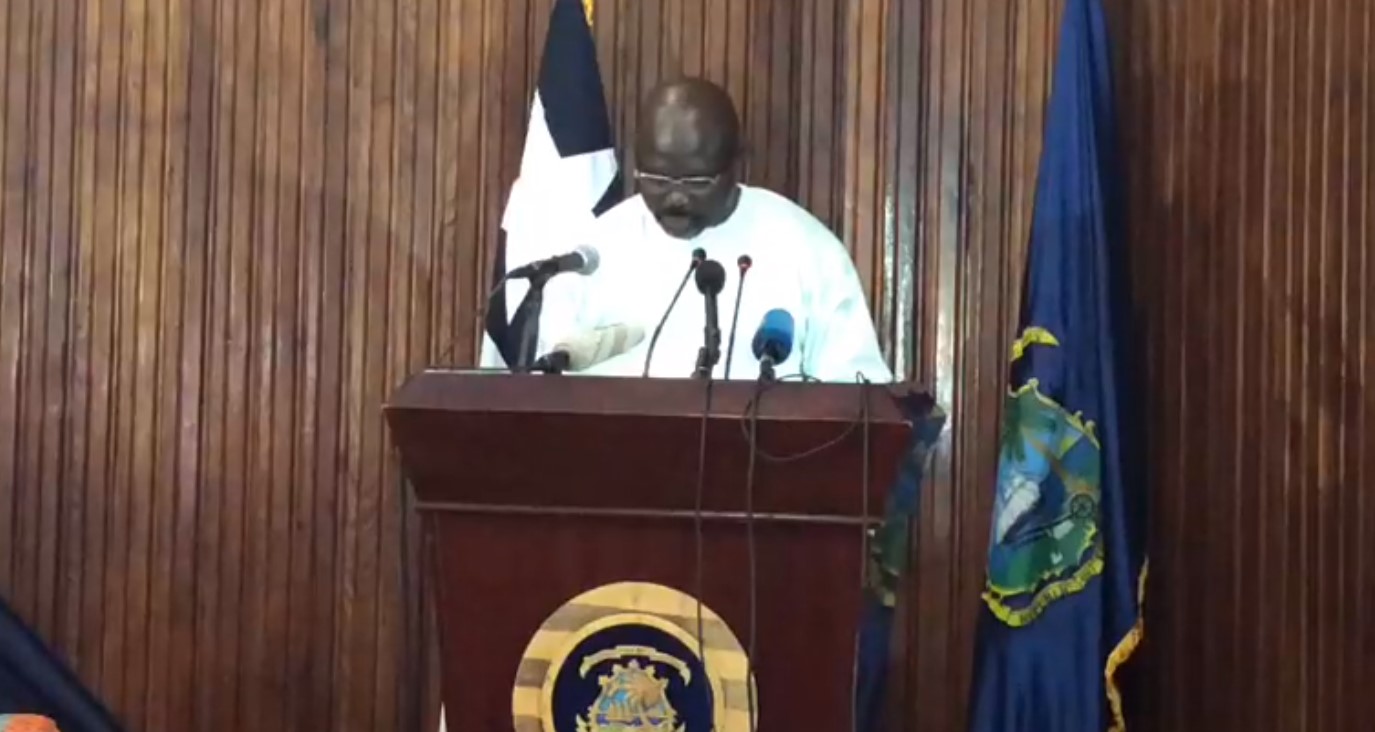 President George Weah addressed the nation in a much-anticipatedÂ speech on the state of the economy. Below is a transcript of his speech.

My Fellow Citizens, our International Partners, Ladies, and Gentlemen:

Nearly six months ago, I was sworn in as president of the Republic of Liberia, following an historic election in which the majority of Liberians demanded change for hope.

One week after my inauguration, I was required to fulfill a constitutional mandate to report to the country on the State of the Nation.

You will recall that during that first annual message, I candidly described the poor state of affairs of the economy which my administration had inherited.

The economy was weak and under-performing, and the government was facing solvency and liquidity challenges. Our currency was experiencing rapid and unprecedented depreciation, contributing to rising inflation.Â Unemployment was very high, and our foreign reserves were at an all-time low.

Today,Â five months later, it is not for us to complain about the bleak situation we inherited; or to cast blame upon previous administrations.Â Rather, ours is a duty and responsibility to find new and sustainable solutions to these age-old problems that have stubbornly defied solution in the past.

We were very aware of these systemic problems when we decided to run for the high office of President of Liberia, and so we are not surprised.Â And we are fully aware that we were elected with the expectation that we will solve these challenges.

This is a task that we are now embarked upon with strong determination, focus, and commitment.

As a first step in this direction, we have placed emphasis and urgency on the formulation of a comprehensive development strategy that will be supported by a strategic implementation plan.

The development strategy, to be known as the Pro-Poor Agenda for Prosperity and Development, is nearing completion, and will very shortly be presented to all stakeholders, including our foreign development partners, the private sector, and the general public, for consultation, input, and buy-in, before being finalized into a strategic implementation plan.

The development strategy and implementation plan will serve as a roadmap for the urgent and important next-steps to be taken in giving direction to our economic recovery and will consist of short-term interventions, medium-term reforms, and long-term restructuring of the Liberian economy.

My fellow Liberians, Ladies, and Gentlemen:

I am fully aware that we are faced with a very difficult macroeconomic situation in Liberia. For many decades, we have incurred trade deficits because we import more than we export.

We also have an economy based on traditional exports such as iron ore, rubber, coffee, etc., which are shipped to foreign buyers in their raw state, without any value-added propositions which could have also contributed significantly to industrialization and employment.

Additionally, the prices and demand for our exports are determined and affected by factors beyond our borders, and are therefore beyond our control.

Slumps in demand for the products which utilize our raw materials will always result in externally-generated shocks to our economy.

The world as a whole is facing new economic challenges. Of late, trade wars between the major manufacturing countries could also reduce demand and place downward pressure on the prices of our major exports.

In the meantime, on a positive note, as regards investor confidence, Liberia has moved to a new level of sustainable peace, which has led to the withdrawal of the United Nations peace mission in Liberia.

However, the negative impact on real estate and inflows into the economy of the U.S. Dollars spent by the former peacekeepers is significant.

Finding lasting solutions to the present macroeconomic challenges will take some time because nothing less than the structural transformation of the Liberian economy will produce sustainable recovery and growth.

The key to success in this endeavor is for Liberians to produce more goods and services locally, so that we reduce our importation of goods and services from abroad, whilst at the same time increasing our exports and adding value to the raw materials that we ship to the world.

In this regard, our government intends to embark upon a major push to ensure that Liberia becomes more competitive in terms of domestic production.

And in so doing, we intend to encourage and empower Liberian businessmen and Liberian-owned businesses to lead the transformation of the Liberian economy.

We will enable them to become more competitive, by providing affirmative policies and support, including ready access to finance and expertise.

The aim and intention of this approach is to encourage import substitution and manufacturing for export, as well as sustainable wealth and job creation.

But this is a medium-to-long term solution. To lessen the immediate negative impact on our people, it will be an urgent imperative to devise and implement short-term fixes to the current problem.

My Fellow Citizens, Ladies,Â and Gentlemen:

Since 2016, the Liberian dollar has been on a consistent depreciating trend, while prices have been on an upward trend.

This recent depreciation in the value of the Liberian dollar has increased, inflation by 4 percentage points to 21 percent, from 17 percent back in February 2018.

I am fully aware of the negative impact of the declining exchange rate on the economic well-being of the Liberian people, and the serious hardship that this is beginning to cause.

Let me assure you, that government has resolved to take the necessary and urgent measures to address the situation.

While the fall in the prices of our traditional exports and the UNMIL drawdown have contributed significantly to this situation, we believe a stronger and more aggressive enforcement of monetary policy, along with the relevant fiscal instruments, should go a long way to partly address the problem.

I am advised that the short-term measure that could have the most immediate and positive impact is the aggressive enforcement of existing monetary policy.

It is clear that our monetary policy regime over the past several years has been too lax.

In fact, it could well be said that we do not have the capability to exert effective control over our monetary policy since more than 90 percent of the money supply is held out of the banking system.

My Fellow Citizens, Ladies, and Gentlemen:

Over the next several weeks, the government, through its Economic Management Team, and in close collaboration with the Central Bank of Liberia, will announce a series of monetary and fiscal measures that we believe should help reverse the decline in the value of the Liberian Dollar.

In seeking solutions to this problem, we intend to engage the minds of the best and the brightest Liberian economists, both here and abroad.Â And we will also seek advice and active support from our international partners.

These measures will include, but not be limited to:

The above measuresÂ and many more currently being considered are critical steps toward the goal of arresting the rapid deterioration of the Liberian dollar.

However, the ultimate solution for strengthening the Liberian dollar is to ensure domestic economic competitiveness and the existence of a strong private sector that is oriented towards domestic consumption, import substitution, and export.Â This is a goal we seek to achieve in the Pro-Poor Agenda for Prosperity and Development.

The road to this transformation will be long, and sometimes difficult, and so we ask our people for patience.

We fully understand the urgency and critical nature of the situation, and we are fully focused [on] trying to solve these problems, some of which have existed for many decades.

Let us all work together to lift our people out of poverty.

We will confront the challenges that have defied us for generations, with strong resolve, and together, we will overcome them, and move on to achieving even greater things for all Liberians.

In so doing, I am inspired by the immortal words of our national anthem, which states that: â€œIn union strong, success is sure. We cannot fail.”

We now ask that you bear with us during this transition period.

Our Economic Management Team will give bi-monthly press conferences on the current state of the economy, and the new measures which will be taken from time to time to deal effectively with this situation, going forward.

We, therefore, call for your understanding, cooperation, collaboration, and patience. Better days lie ahead!

As we embark on this journey of economic transformation, may God bless the works of our hands and save our Great Republic!