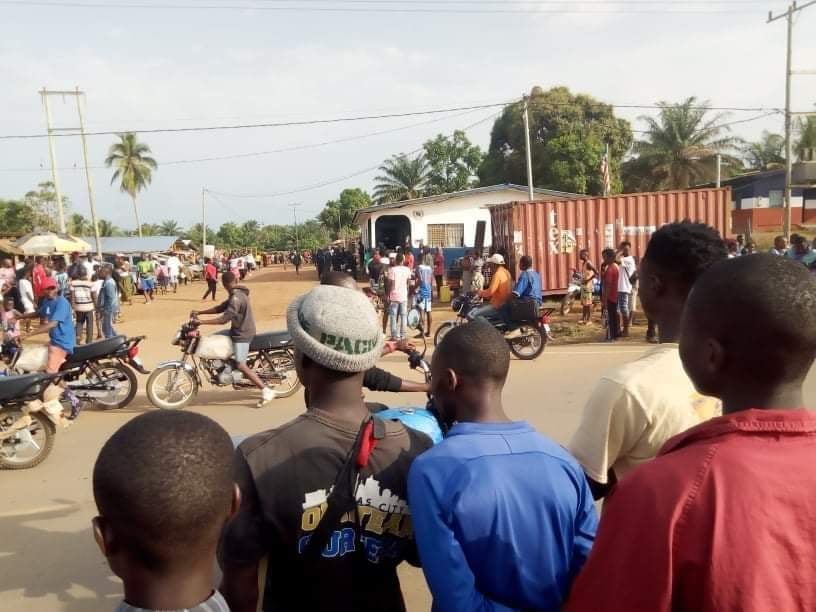 GANTA, Nimba â€“ The commander of the Liberia National Police in Nimba, Commissioner Augustine Leo Warri, has disclosed that one of his officers, Sgt. Sensee Kowo, who was also deputy commander of the Ganta Detachment, has been disrobed and is currently under investigation for allegedly killing 18-year-old motorcyclist, Samuel Selleh.

Selleh was a resident of Peace Community in Ganta, Nimba.

Kowo, according to the police commander, will remain disrobed and in police custody until a â€œfull scale” investigation is conducted. The former police officer was reportedly engaged in a physical tussle with the motorcyclist when Selleh died.

A preliminary police probe has revealed that the two men were first engaged in a verbal dispute, which led to a physical tussle, as part of a larger group conflict around Jackie’s Guest House during the late hours of Sunday, March 8.

The police had been called in by private security guards to help disperse a group of young men who had gathered within the vicinity of the guest to consume illegal substances.

An account has it that the 18-year-old Samuel did not die from the tussle with Kowo, but rather from being inflicted by stones thrown by his colleagues who came to his defense as he and Officer Kowo struggled with each other. Sgt. Kowo insists, however, that he did not use excessive force in attempting to apprehend the deceased.

As tensions flared up among young motorcyclists known for violent reprisals for actions against their members, the countyâ€™s police commander appealed to motorcyclists, members of the public, and the family of the deceased to exercise patience as authorities worked to ensure a full investigation of the incident.

According to Warri, the Liberia National Police takes the situation very “seriously” and will pursue the investigation without partiality because the incident could derail the hard-earned reputation of the police and destroy its good relationship with the community.

In an effort to ensure a speedy investigation, a team of police investigators is due in Nimba to join their colleagues in the probe.

The head of the Federation of Motor and Tricycle Union of Liberiaâ€™s Nimba chapter, Tony S. Gbeanquoi, has called on his fellow motorcyclists to exercise restraint and allow the police time and space to investigate the incident, challenging his colleagues to “compose themselves in a way that sends a positive message.â€

Gbeanquoi has given his word to the police and the general public that his leadership will remain engaged with the police for a timely and transparent result, and that those responsible for the death of their colleague must be held accountable.

The father of the deceased, Saye Selleh, told journalists he was overwhelmed with grief. The elder Selleh expressed shock upon hearing that his son was killed by a police officer for allegedly being a part of a group of drug abusers. Selleh insists his son never used drugs, and was not known to be connected to any such practice.

The deceased was a ninth-grade student at the Ganta YMCA High School. He became involved in commercial motorcycling only two months ago and had not been known to have been involved in any kind of civil disturbance, let alone confronting a police officer.

Selleh said his whole family is grief-stricken and is still struggling to process the sudden death of their beloved son. They will not rest, he said, until justice is served to anyone responsible for his sonâ€™s death.

The remains of the deceased have been deposited at the Gompa Funeral Home in Ganta City by police, as the investigation continues.