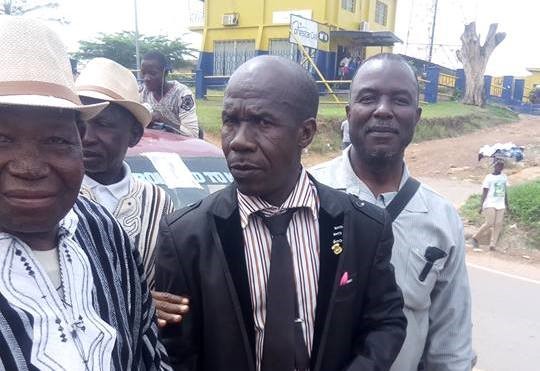 GANTA, Nimba â€“ Ganta citizens are demanding that Mayor Amos Suah return city land they say he has given to prominent individuals for their private use.

The citizensâ€™ demand came after cornerstones with initials were discovered planted on portions of land that had been waived to the city for development purposes.

Many citizens called to a local radio show to express their dissatisfaction that the mayor either donated or sold the properties to individuals who could have acquired land on their own.

â€œThe issue of you having a parcel of land here and deciding to take the rest of the land to give it to other people, we think that you have to reconsider your decisionâ€”itâ€™s not just fair,â€ said Jesco Davis, a member of the Nimba County Civil Society Network. â€œAs a mayor who we think is working very hard for this city, you have to undo this decision.â€

In his first 30 days as mayor, Suah embarked on a journey to ensure that all public land was properly registered to the city. One of the areas in question previously hosted soldiers from UNMILâ€™s Bangladeshi contingent. That land, which was donated by members of the community, has now been earmarked for the future construction of the Gompa Multipurpose City Hall.

Before the 5.5 acres of land was surveyed, the mayor held a town hall meeting with residents of Small Ganta to seek their final approval of the donated property.

However, cornerstones containing the initials â€˜MLB,â€™ â€˜ASG,â€™ and â€˜PYJâ€™ have recently appeared on the land. Although unconfirmed, the â€˜PYJâ€™ suggests that the land could now belong to Nimbaâ€™s Sen. Prince Yormie Johnson.

Nyan G. Flomo, a defeated candidate in the 2017 election for representative of Nimbaâ€™s second electoral district, took a cynical approach to the controversy, noting that the practice did not surprise him, as it has been in practice long before Suahâ€™s appointment as mayor.

â€œI think what we are seeing is a repetition of past activities that have resulted in Ganta been deprived of lands to use for development purpose,â€ he said. â€œRight opposite the commissioner compound, the entire land for J. W. Pearson High School has been sold. Today, people are here looking for land for Pearsonâ€™s development. Where we used to have the [military] barrack, everything has been sold. Today, people [are] looking for public land for Gantaâ€™s development. What is happening now, if it is true, then, is a repetition of what happened around Gordordin Market.â€

Flomo said it is the duty of the mayor to safeguard properties meant for the city, instead of giving them out to individuals.

â€œHeâ€™s supposed to be fighting to secure lands for Gantaâ€™s development and not to be giving it out to other people,â€ he said.

Flomo said for Liberia to be developed, it must desist from repeating the same mistakes â€œover and over.â€

Sharing
Tags Amos Suah
Contributions to The Bush Chicken are not tax deductible.