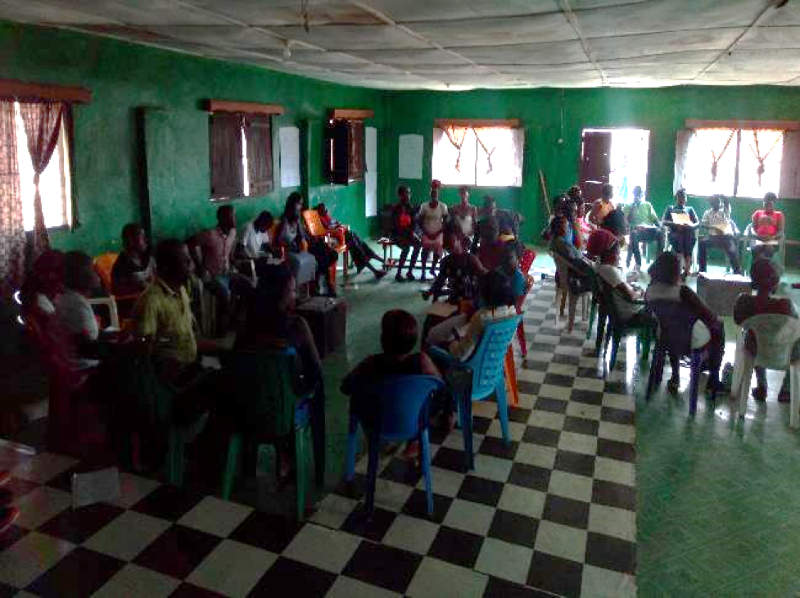 GANTA, Nimba â€“ About 100 â€œhigh-riskâ€ young people in Gompa [Ganta], are currently benefiting from skill training opportunities that will empower them face social and economic challenges they may come across in their life journey.

The six-month program is expected to come to an end in February 2018, with beneficiaries expected to have acquired knowledge in soap making, tailoring, hair dressing, carpentry, and basic computer skills. To keep the beneficiaries engaged in sustained activity after the close of the USAID-supported program, the Development Education Network of Liberia (DEN-L), organized the participants into Village Savings and Loan Association groups, and conducted a three-day training for members of the groups.

Peter S. Dolo, the human resource manager and VSLA trainer for DEN-L, said the goal of the program was to ensure sustained peace in Liberia by empowering the youth.

â€œYoung people have been marked as people who are violent, so this project is to make the young people non-violent in the society, even after elections,â€ Dolo said. He said that if the youth are engaged in productive activities, â€œthey cannot go into the streets and get engaged in violent activities.â€ Peter S. Dolo of DEN-L speaks at the end of the VSLA training. Photo: Arrington Ballah

â€œThe expectation is that young people will be able to develop themselves, their minds, have a better livelihood, and live better in their communities,â€ he said.

Dolo called on the youth to take advantage of the opportunity to empower themselves.

â€œI can remember when we came around [last] September and October to recruit young people for this program, many of them didnâ€™t take it seriously. But now that we are in gear [and] moving, we see most of them now running behind us to be a part of the process,â€ he said.

A participant in the program, Kelvin Saye Flomo, said he was looking forward to learning life skills to be able to change his life for the better.

â€œI am very much impressed by this organization that came here; itâ€™s really bringing changes to us,â€ he said. â€œFor me, I am attending the computer school through their efforts, and every month, they provide our fare. I pray to God that after my training, I can find [a] job to do around here.â€

Marthaline Seigan, another participant, said the training is a great help to young people of Ganta.

â€œThey are bringing changes to the young [people] in Gantaâ€”like for me, I was not able to fix hair and now I am in the hairdressing area and can now be able to fix my hair,â€ she said. â€œItâ€™s brought some changes to me that will help me tomorrow when I leave this program. I will be able to make some money for myself.â€

The program is being funded by the United Nations Mission in Liberia and is implemented by DEN-L in four counties: Bong, Lofa, Nimba, and GrandÂ Gedeh.