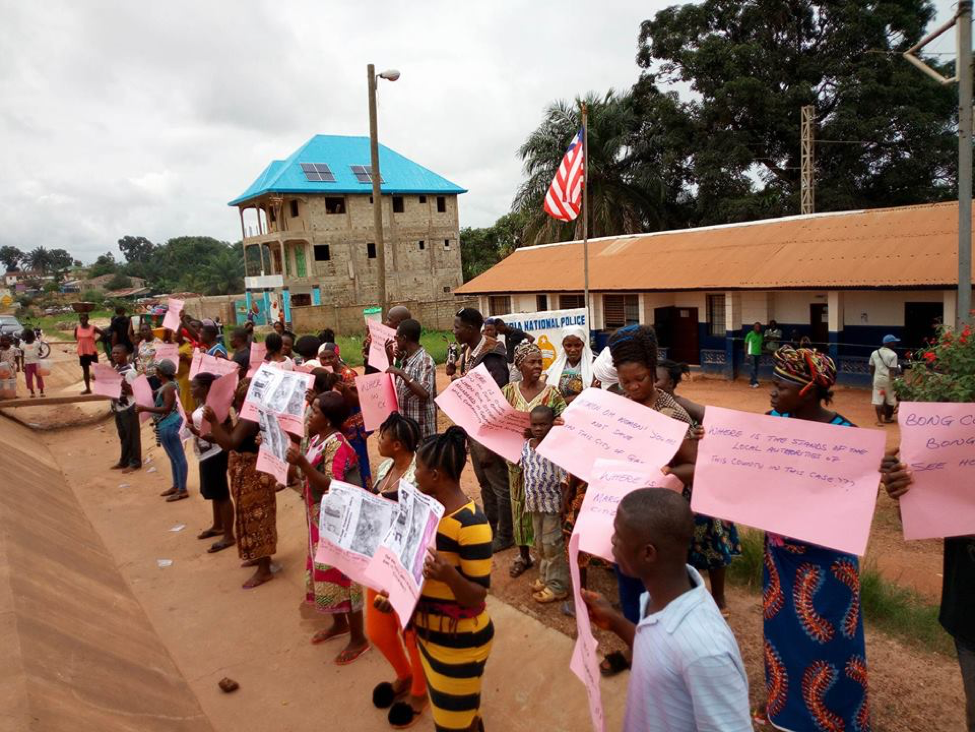 GBARNGA, Bong â€“ Family members and friends of a 29-year-old woman who was mysteriously killed in Gbarnga have embarked on a peaceful demonstration calling on the government to ensure those responsible for her killing are arrested.

The decomposed body of Angeline Kolleh was found in the Sugar Hill Community on August 7, a few minutes away from the house where she was renting.

Police record showed that she had been missing since July 7.

The commander of the Crime Services Department of the Liberia National Police in Bong, Kelenso Flomo, told The Bush Chicken that a 15-man jury set up to examine the body established that there was â€œfoul play.â€

â€œDuring the cross examination, the jury established that the ladyâ€™s head was discovered in a plastic bag along with her two legs in separate locations,â€ Flomo said.

No arrests have been made in connection with the death of the woman, according to the police.

Meanwhile family members and friends of the deceased paraded with placards on Thursday calling on the government of Liberia to arrest those responsible for Kollehâ€™s death.

Moses Kolleh, the father of Angeline Kolleh, said the deceased visited him in Kakata in June this year. He said Angeline is originally from Kakata but she had moved to Gbarnga to work with a local NGO. â€œWe are only appealing to the government to help arrest the people who did this to our daughter,â€ Kolleh said. â€œOur family is downhearted. Can you imagine that my daughter was just 29 years of age, no child and now she is no more?â€

He assured the family members and the public that the police are doing everything possible to bring the perpetrator to justice. Nepay said he has communicated with headquarters of the Liberia National Police in Monrovia for assistance in the investigation. â€œWe requested additional investigators from Monrovia to come and help us continue this investigation,â€ Nepay told The Bush Chicken.

The decomposed body of the woman has been turned over to family members for burial as police investigation continues, Nepay added.

Even though no official arrests have been made, police say they have invited Angeline Kollehâ€™s landlords in Gbarnga for questioning.

On community radio stations, some residents and rights groups have condemned the killing of Kolleh and called on the police to beef investigation to ensure the culprits are apprehended.

This is not the first time in Bong for such a suspected murder to occur; in September 2012, Janet Harris, 12, went missing in Yarkporla, Jorpolu Clan. A week later, her decomposed body was found in a nearby creek with several parts extracted.

The conditions surrounding Kollehâ€™s murder appears to resemble what is known as ritualistic killings, a fairly common phenomenon in Liberia. The killings usually peak around elections season as body parts are used in rituals aimed at giving political candidates an edge.