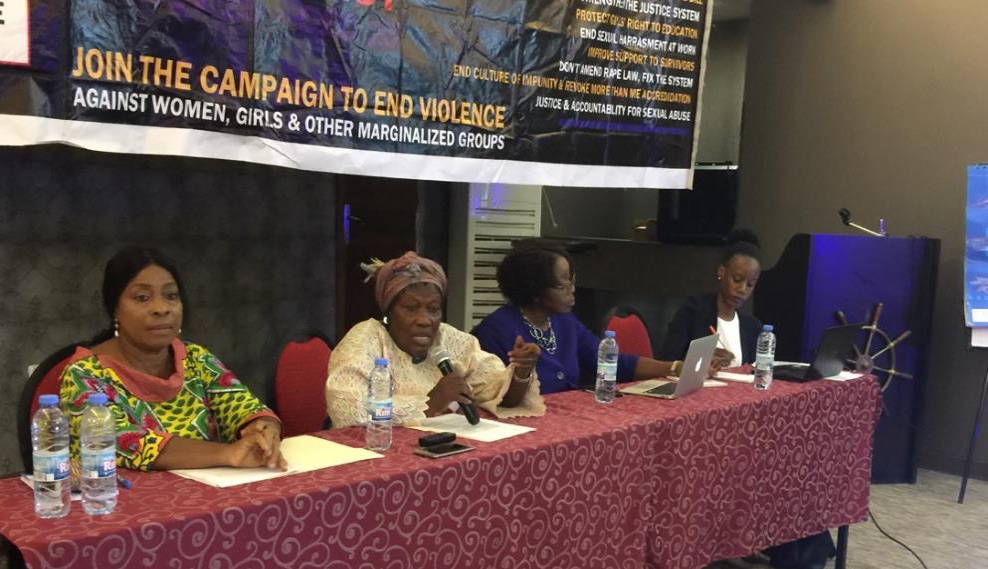 MONROVIA, Montserrado â€“ The #WeAreUnprotected movement against sexual and gender-based violence ended a one-day session to reflect on the impact of gender advocacy campaigns in 2018.

The event took place on December 12 in Monrovia and brought together stakeholders and members of the movement to brainstorm on strengthening gender-based violence protection frameworks.

ActionAid Liberiaâ€™s country director, Lakshmi Moore, noted that the event marked the official closing of this yearâ€™s 16 Days of Activism that had begun at the end of November.

Moore said the year 2018 began with the issuance of Executive Order 92 by former president Ellen Johnson Sirleaf against domestic violence. Now that the year is ending, she said it was important to discuss the way forward to pass the Domestic Violence Act or renew the executive order, which expires after a year of issuance.

Sirleaf issued the order in January to accomplish some of the aims of the stalled Domestic Violence bill, which seeks to protect women against violence and abolish female genital mutilation for girls under the age of 18. The bill was submitted in 2014 but still lingers at the legislature although the president had told the U.N. General Assembly that the draft law would be enacted passed before her administration came to an end.

After calls by Sirleaf and women rights groups, the House of Representatives passed the bill in mid-2016, excluding the prohibition against female genital mutilation. Moore said the lawmakersâ€™ action undermines the very essence of the law and leaves it incomplete.

The ActionAid Liberia country director said the review of the circumstances and the way forward on the bill was the main purpose of the gathering, amid the official closing of the 16 Days of Activism.

Moore said after series of campaigns against gender-based violence, it was also important to come together to review and analyze what activists have been through and the new advocacy paths they were taking.

â€œUnder the #WeAreUnprotected campaign, itâ€™s more than just looking at where we are, but where we need to go,â€ she said.

â€œWhen we say we are unprotected, we are saying that all of these issues we are having, we need to get to where we will be protected as women in this country.â€

The president of the National Rural Women Association, Kebbeh Monger, stressed the importance of inclusive dialogue, especially on policies that would affect a large group of people. She was referring to the need for ordinary rural women to be knowledgeable about the Domestic Violence Bill.

She believes that effective education on policies can make it easier for such policy to be easily implemented.

â€œThe people in the interior donâ€™t know when your child is raped, you will have to prove it and [they] are not supposed to bath the child before making complaints to the police,â€ she said, for example.

She called on the Ministry of Gender, Children, and Social Protection to increase its awareness in rural communities. She said if this is done, compromises and impunity around gender-based violence would be minimized.

â€œAnother problem is the justice system. Justice is not free in Liberia, and that is why many victims, survivors, and the families compromise with rape cases,â€ she added.

At the same time, a commissioner of the Law Reform Commission, Ruth Jappah, noted that womenâ€™s rights issues are considered serious violations because they are human rights.

U.N. Womenâ€™s sexual and gender-based violence program specialist, Pearl Atuhaire, disclosed that more than 2.5 billion women across the world are affected by discriminatory laws and lack of legal protection.

â€œSGBV [sexual and gender-based violence] and harmful traditional practices are manifestations of women rights violation. We should know that if there is any form of rape, domestic violence, physical violence, economic violence, female genital mutiliation, and all other harmful practices are all manifestation of human rights violation and most of the people affected by this are women and girls,â€ Atuhaire said.