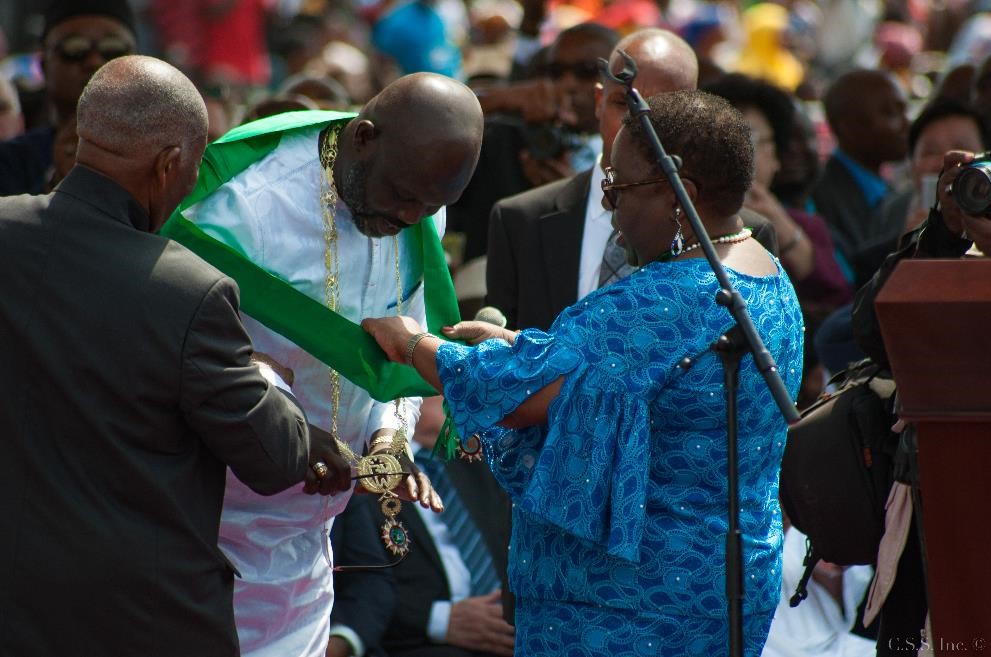 Weah and his vice president, Jewel Howard-Taylor, were inaugurated Monday at the Samuel Kanyan Doe Sports Complex before an array of celebrities and world leaders, including current and former heads of state. The inaugural ceremony was also witnessed by more than 30,000 Liberians, including ordinary citizens, current and former officials of government.

The new president and vice president were announced winners of the December 26 runoff presidential election after receiving more than 60 percent of the total valid votes.

Her administration is credited with restoring Liberiaâ€™s image on the international stage, settling billions of the countryâ€™s foreign bilateral and multilateral debts, establishing and strengthening legal and institutional frameworks, and restoring basic social services to some part of the country, including health, education, electricity, and water.

The administration has also made some gains in connecting major cities by rehabilitating and building roads, including the Suakoko Highway, which connects four of Liberiaâ€™s largest cities including Monrovia, Kakata, Gbarnga, and Ganta.

However, despite Sirleafâ€™s accomplishments, by her own admission, she failed to make headways in key areas, including ensuring that ordinary Liberians could benefit from investments in the economy, taming a corrupt public sector, and promoting national reconciliation for a country with civil war memories still fresh.

In his inaugural address, Weah promised to lead the country from the state of division to national unity, and toward a future of hope and prosperity.

â€œI have here taken an oath before you, and before the Almighty God, to uphold our constitution and to preside over this government and this country to the best of my abilities,â€ he said. â€œRest assured; I will not let you down.â€

Weah noted that his administration would need people who had the foundation of trust required for the country to benefit Liberians.

â€œDuring my tenure as president of Liberia, the loudest battle cry that must ring from the mountains of Wologisi to the peak of Yekepa, from the ranges of Putu to the hills of Bomi, and from the coast of Harper to the shores of Monrovia, must be the cry of national unity,â€ he said.

He called on Liberians to strive to put aside their differences and join hands in the task of nation-building.

â€œWe must learn how to celebrate our diversity without drawing lines of divisions in our new Liberia.,â€ he said. â€œWe belong to Liberia first before we belong to our inherited tribes or chosen counties.â€

The new Liberian leader declared the country open for business and promised to push for a business-friendly regime. He promised that his administration would provide an enabling environment for honest and transparent business by removing unnecessary regulatory constraints.

Weah made it clear that Liberian businesses would be prioritized under his administration.

â€œAs we open our doors to all foreign direct investments, we will not permit Liberian-owned businesses to be marginalized,â€ he said. â€œWe cannot remain spectators in our own economy.â€

Weah also hailed the international community, including ECOWAS, the African Union, the UN, institutions such as the World Bank, for helping to restore the countryâ€™s peace and promoting democracy, reconciliation, and development.

He also praised the United States government and its people for their support.

â€œThe Republic of Liberia has a strong historic relationship with the United States of America, which has manifested itself and that relationship will even be stronger under my administration,â€ he said.

In a statement that received an unexpected amount of attention on social media, Weah praised the European Union for its critical support for Liberiaâ€™s recovery from war and stressed the importance of continuing the relationship in forging ahead of the path of transformation. His praise for the European Union was almost the same length as the time he dedicated to his praise of the U.S. At some point, rumors were being spread that the new president had omitted to mention the U.S. in his address.

â€œIt was my success in European football that enabled me to give back to my beloved country.Â  Europe will always have a special place in my heart, and, as president, I intend to strengthen my relationship with the European community for the benefit of all Liberians,â€ Weah also said.

Not known for his eloquence, the president appears to have developed a refrain that he now frequently repeats to quell critics of his oratory.

â€œMy greatest contribution to this country as president may not lie in the eloquence of my speeches, but will definitely lie in the quality of the decisions that I will make over the next six years to advance the lives of poor Liberians,â€ he said.

Weah made it clear that he also had expectations of Liberians.

â€œMine is an expectation that you will push yourselves to achieve the possibilities that are within your reach,â€ he said. â€œThat you will aim to do more for yourselves and expect others to do less.Â  And mine is a further expectation that you will discover a new sense of fairness and integrity; a new love for country and for each other. A love that will turn public servants and government officials into national champions for change.Â  A love that will bring back home Liberians scattered far and wide across the globe â€“ many of them highly skilled, talented, and experienced â€“ to join us in building a New Liberia.â€

As a successful soccer legend being inaugurated in a stadium where he played as a young man, Weah said the moment was meaningful to him.

â€œI am overwhelmed with the crowd and the energy here today, and I guarantee you, when we finish, there will not be a winning or a losing side. Today, we all wear the jersey of Liberia, and the victory belongs to the people, to peace, and to democracy,â€ he said.

â€œThis inaugural gathering also celebrates an important precedent: that we Liberians can, and will, rely on established institutions and the rule of law to resolve our political disagreements. This demonstrates the maturity of our institutions and that we as a people have learned valuable lessons from our brutal history.â€

Before coming to politics, Weah gained fame playing football in Europeâ€™s top clubs. He played for Liberiaâ€™s national team and international clubs including Chelsea, Manchester City, Monaco, AC Milan, and Paris Saint-Germain, where he became the only player to be recognized as the best player in Africa, Europe, and the world, all in the same year â€“ 1995.

The president entered the political scene in 2005 when he first contested for the presidency. He subsequently ran as a vice presidential candidate in 2011 and lost. He was, however, overwhelmingly elected in 2014 as a senator of Montserrado, succeeding another member of his party, Joyce Musu Freeman.