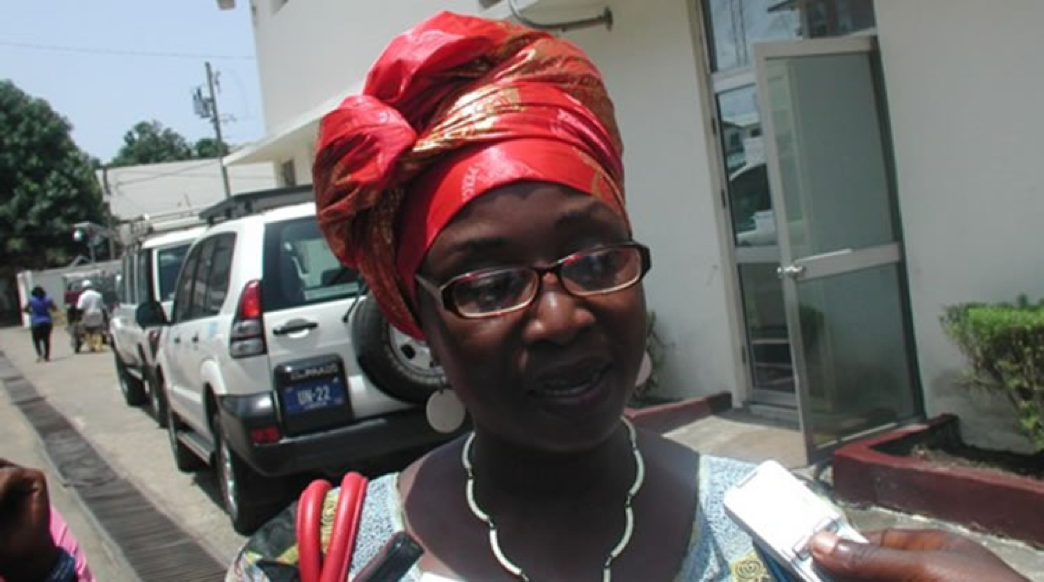 SANNIQUELLIE, Nimba – Liberty Party’s senatorial aspirant for Nimba, Edith Gongloe-Weh, is denying that she will not get a chance to represent the party in the pending midterm senatorial election due to a recent agreement among members of the Collaborating Political Parties.

Gongloe-Weh is the only female who has so far declared her intention to contest for the senatorial position in Nimba in the pending midterm election.

Her Liberty Party is a member of a coalition of opposition parties, the Collaborating Political Parties or CPP, which has been reviewing an agreement to petition the 15 counties among individual member political parties. The other members of the CPP are Unity Party, Alternative Congress, and the All Liberian Party.

According to the agreement, the Alternative National Congress will be the only member of the collaboration that will field candidates in Nimba, Maryland, Grand Cape Mount, and River Gee while Liberty Party will feature candidates in Montserrado, Grand Bassa, and River Cess.

Meanwhile, Unity Party will feature candidates in Bong, Lofa, Sinoe, and Bomi. The All Liberian Party will also supply candidates in the remaining counties – Margibi, Gbarpolu, and Grand Gedeh.

If the arrangement holds, it means the Alternative National Congress’ choice for Nimba’s senatorial seat, Taa Wongbe, is likely to receive the support of the four parties, against the ambitions of Gongloe-Weh and candidates from any of the other three members of the CPP.

She would have the hard decision of supporting Wongbe or registering as an independent candidate or on the ticket of another political party if she must contest in the election. Gongloe-Weh, however, calls reports of the arrangement “rumors.”

Speaking on a local radio station in Nimba via telephone, she said she can only believe the report if the information comes from the chairman of the CPP, Alexander Cummings, or its official spokesperson.

“To the best of my knowledge, nothing of such has happened,” she said. “And so we are treating it as rumor and hearsay until it can officially be announced. Something like that has been said before and it was declared null and void. It was nullified because according to the then chairman, Mr. Benoni Urey, the committee that was set up to draft the framework document was not authorized to distribute the counties on the parties that are part of the CPP. That decision has been nullified and what is now circulating is just a rumor. Even if that is the final decision, it is not the end of the world for me.”

The former Nimba superintendent has contested for the senatorial position twice and lost to incumbent senator Prince Johnson in 2014 and Senator Thomas Grupee in 2011.

Since the reports of the CPP’s arrangements have surfaced in the public, many Nimba residents have wondered whether the decision by the CPP is a political miscalculation, given the current political weight of Gongloe-Weh in the county.

Additionally, it is not clear whether Sen. Prince Johnson, who is not a member of the CPP, still has the same power to sway elections in the county. During the 2017 general elections, his Movement for Democracy and Reconstruction obtained 53.5 percent of the total votes in Nimba, while the CPP member parties jointly obtained 31.9 percent.

Now, there are already suggestions that Johnson will throw his political weight behind the county’s first electoral district representative, Jeremiah Koung, who appears to be planning a run for the Senate.

People from the camp of the ANC’s Wongbe, however, believe the young man is marketable enough to unseat the incumbent Sen. Grupee. The national mobilization chairman of Wongbe’s party, Lawrence Suah, said the decision by the CPP to support his party’s choice is a giant step forward for the opposition arrangement.

He confirmed the partitioning of the counties among CPP member political parties, noting that the parties were requested to choose among the counties. He called on partisans and supporters of the ANC to support whoever that would surface as candidates in the various counties under the CPP arrangement.

Meanwhile, a member of the CPP secretariat, Mohammed Ali, clarified that the rumored arrangement has not yet been approved by the CPP’s executive committee. Therefore, it is still subject to change.

“That allotment was a temporary suggestion made by the Technical Committee and it is yet to be approved,” Ali explained.

Ali said in cases where a party in the coalition is interested in a particular county that was not given to it, there will be a primary or a voter perception survey among candidates that will be opting to contest in the county.

He assured that the CPP would field candidates in all 15 counties in the midterm senatorial elections.