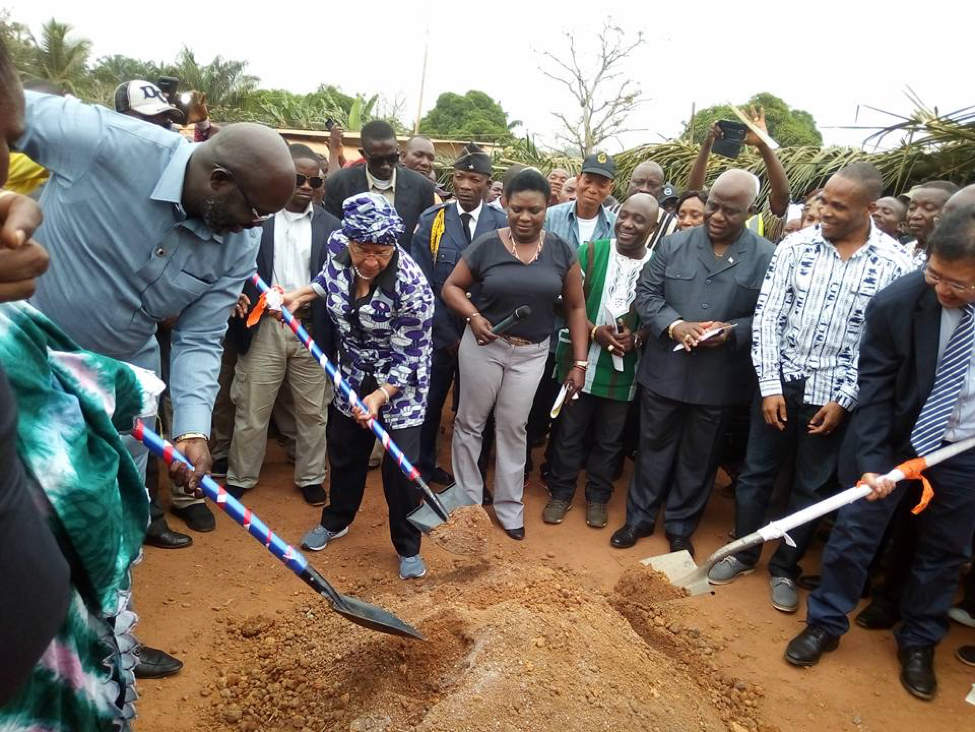 GBARNGA, Bong- The government of Liberia has broken grounds for the pavement of the 81-kilometer road from Gbarnga, Bong County to Salayea in Lofa County.

The official groundbreaking was done by President Ellen Johnson Sirleaf and other officials of government Thursday in Gbarnga.

At the ceremony, Sirleaf thanked members of the National Legislature for ratifying the loan agreement that gave rise to funding the project.

The president also lauded the funders of the project and called on citizens of Bong and Lofa counties to take ownership of the road project.

â€œThis is your road, people of Bong County, so you need to protect it to ensure it is constructed,â€ Sirleaf said.

She also expressed hope that the next government will continue the implementation of the roads construction plan initiated by her administration.

â€œAdmittedly there will be changes, there will be new priorities, but at the end of the day I am quite sure that any successive government, realizing the importance of our road programs, will stand by it and carry it forward.â€

He also applauded the role of the legislature in signing and ratifying roads agreements allowing for smooth implementation.

He noted that the government had successfully completed and dedicated the Monrovia-Ganta Corridor and the groundbreaking for the Gbarnga-Menikorma Corridor was a great achievement for the government and Liberians.

Moore noted that the government is currently sourcing US$225m from the World Bank for the Ganta-Harper Corridor beginning with Ganta-Zewdru.

Bongâ€™s superintendent, Selena Polson Mappy, termed the groundbreaking of the road as a â€œdream come trueâ€ for users of the Gbarnga-Salayea Road.

She said when the road is paved, the likelihood of road users getting cough infections as a result of dust from traveling the Gbarnga-Lofa Road would be curtailed.

Mappy said that this would be the first time, since 1964 when Bong and Lofa Counties obtained county status, for a paved road to connect the two counties.

She thanked President Ellen Johnson Sirleaf, members of the Legislature, the minister of Public Works and the donors for the road project.

The project, which will cost slightly over US$40.5m, will be implemented by CHICO-a Chinese company and is expected to commence in February next year.

The groundbreaking program was attended by the standard bearer and vice standard bearer of the Coalition for Democratic Change, Senators George Weah and Jewel Howard Taylor, Defense Minister, Brownie Samukai, Bongâ€™s representative Prince Moye and an array of national and local government officials.