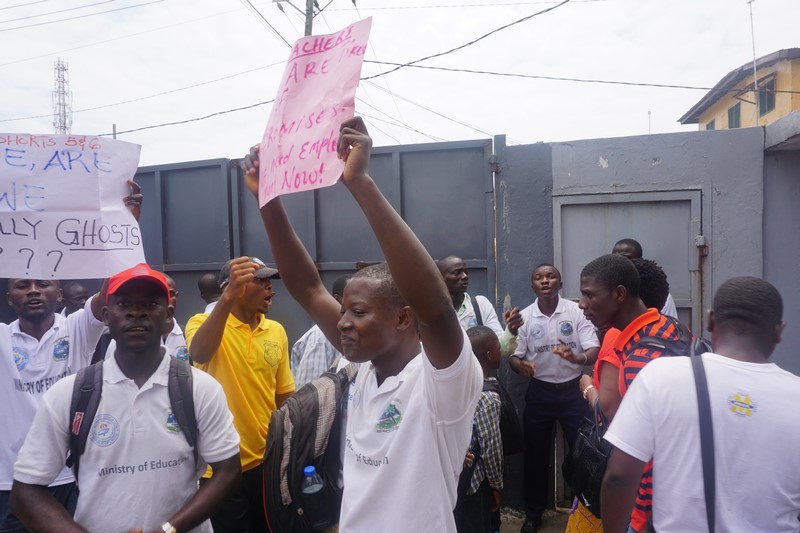 MONROVIA, Montserrado â€“ On Thursday approximately 30 graduates of the various Rural Teacher Training Institutes entered the compound of the Ministry of Education to protest. They said the ministry had not fulfilled its obligation to place them in teaching positions since graduating from the institutes.

John D. Smith, the spokesman for the group, said he and the rest of the protestors represented 1,158 students who had not been placed into schools across the counties some two years after graduating.

The protestors were graduates of the C-Certificate program from the three Rural Teacher Training Institutes located in Kakata, Zorzor, and Webbo. The program is a USAID-sponsored program which serves as the minimum requirement for teachers in Liberia. The training usually lasts for nine months and was initiated as an emergency measure implemented after the civil war to quickly train and supply teachers to schools across the country. Smith said President Ellen Johnson Sirleaf attended their graduation ceremony and directed the minister to make sure that they were employed speedily. â€œSince then, failure,â€ Smith added.

Smith said the graduates had already gone through the process of submitting relevant documents to gain placement as teachers at government schools, including filling out personnel action forms.

The group had made several attempts at resolving the issue in a professional manner, Smith said, including writing a letter to the president and having several meetings with the outgoing Minister of Education, Etmonia Tarpeh.

He said the group was now resorting to protest because they had exhausted all professional options of resolving the issue.

The graduates were in limbo as they had signed a memorandum of understanding with the government restricting them to working for the Ministry of Education for at least two years.

Smith himself encountered such an incidence. â€œI was denied personally because I went and applied and they asked me, â€˜In case the government gets ready for you, what will you do?â€™â€ he said. â€œI told them I will go because Iâ€™m government property. The government trained me.â€

The protestors provided a letter signed by Precious Brownell-Dennis, Director of the Kakata Rural Teacher Training Institute. The letter, which was addressed to students accepted into the program, said, â€œStudents will be required to sign a contract to work as a teacher for two years in their respective county of origin as indicated upon their completion of the program.â€

When the Minister of Education, George Werner, arrived at the compound, he offered to speak with the leaders of the group, granted that the rest of the protestors leave the compound. Six students including Smith were invited to meet in a conference room with Werner where he explained to the protesters the many constraints the ministry faced.

â€œI can tell you point blank â€“ the government does not owe you anything,â€ he initially told the protestors. He then added, â€œLetâ€™s work together to make sure you get placed.â€

Werner said his major concern was getting rid of the huge number of ghost workers on the Ministry of Educationâ€™s payroll. He gave an example where one school had 4,000 employees on the payroll and another where students were listed as employees.

Werner said he was concerned about cleaning the payroll before adding new employees. The ministry was now working to equip all teachers with a biometric identification card which would require swiping the card along with authenticating with a fingerprint.

The process was almost complete with employees in Montserrado while Bong, Lofa, and Nimba will commence soon. â€œBy December, we should finish those three counties,â€ Werner said.

The other concern Werner had was the complications with those who hold a C-Certificate not having the proper credentials.

While a prerequisite for going through the C-Certificate training was a West African Examination Council passing result, Werner said many of those with a C-Certificate had not passed the WAEC tests given to students in their last year of high school.

The minister said he sympathized with the protestersâ€™ anxiety in a country where the unemployment rate was so high. He promised to work with them to get them employed but provided no timetable. He said not everyone would be placed immediately and that it would take time.

Even with that, Werner said the graduates should not view the C-Certificate as an end but to continue pursuing other means of career development including attending colleges.

â€œThe C-Certificate was a temporary measure after the war,â€ Werner said. He expressed his dissatisfaction with the fact that few teachers had at least a college degree â€“ only 17% do.

â€œIn fact Iâ€™m terminating that [C-Certificate] program,â€ the minister added. â€œThis is the last batch.â€ He said the ministry would now focus on the B-Certificate program which would have much higher requirements.

To demonstrate he was serious about addressing their issues, Werner presented a document containing a list of priorities for the Ministry of Education. Employing the 1,158 educators was the second item on a list of 15 projects. He directed them to show the document to their colleagues to assure them that they were a priority.