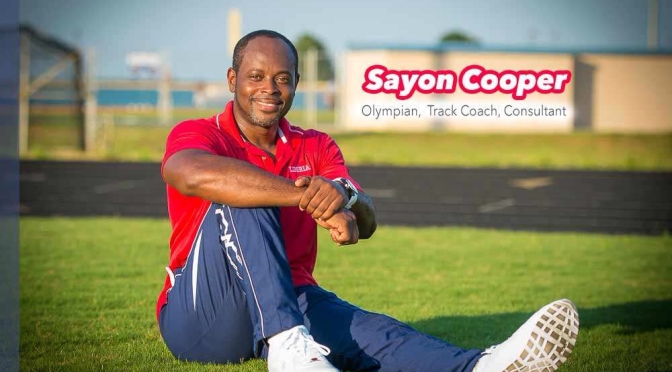 Grow up. Become a soccer star. The typical Liberian boy aspires to reach these two milestones.

Before heading to Rio, Liberiaâ€™s track team coach, Sayon Cooper sat in his office at the Morehouse School of Medicine and reflected on how his soccer dreams turned into track and field success.

â€œI didnâ€™t know anything about going to college for free on a track scholarship,â€ Cooper admits.

His track career began, almost accidentally, during the end of his sophomore soccer season. Sayonâ€™sÂ high school soccer coach insisted he find a way to stay in shape until the new season began. Â That summer, CoachÂ Godrey Moore, transformed SayonÂ from a striker into a sprinter. In 1992, His undeniable speed got him lots of attention at Seneca Valley High School. It had only been a few years since the teenager left his grandmother in Liberia to join his parents and younger siblingsÂ in Maryland, USA.

Cooper confesses, â€œI wanted to be like my father. He played soccer, but not professionally.â€ Instead, the young runner took on his motherâ€™s athleticism. â€œMy motherÂ ran track and played basketball. She was very good,â€Â heÂ adds.

He leans back in his chair and laughs at how clueless he was about his talent and the opportunities it would provide. As Cooper continues the conversation, he subconsciously runs through a list of namesÂ â€” coaches and agents who impacted his career. Coach Culbreath. Coach Kitley. Paul Doyle. Coach Seagraves. The list goes on.

Out of these experiences, he lingers on the 1996 Olympics.

â€œLiberia was going through a war, and I was proud to represent my country. I was proud to show that there was still hope for us,â€ Cooper recalls.

The 1996 Liberian Olympic team came together, during a time when death and war were the only images coming from Liberia. Five total athletes competed. All of them were star runners, born in Liberia and living in the US. They dashedÂ intoÂ Atlantaâ€™sÂ Olympic Stadium during the opening ceremony, dressed in all white waving their hands, pumping their fists, chanting, and smiling behind Liberiaâ€™sÂ bold star and familiar stripes. Thousands of displaced Liberians around the world watched. For the first time in many years, they could see their country and smile. This is one of Cooperâ€™s most memorable moments.

From this point on, Cooper represented Liberia in national competitions. Running forÂ his countryÂ was rewarding, but after 13 years of fierce competition, Cooper retired from the sport.

CooperÂ stayed away from track for four years, butÂ colleagues pressured himÂ to returnÂ and he complied.

â€œWhen you have a calling, God has a way of pulling you towards it,â€ Cooper says. Iâ€™ve always wanted to expose athletes to the information and opportunities that my coaches gave me.â€

â€œIÂ would likeÂ to host a coaching clinic in Liberia,â€ Cooper shares.

He smiles as he explains how important it is to understand the mental and physical aspects of the sport. It is important for coaches to get inÂ the blocks and show the athletes how to perform, but poor coaching is not Liberiaâ€™s only problem.Â With an irritated sigh, CooperÂ states his concerns about the inadequateÂ track that outlines the Samuel Kanyon Doe Sports Stadium in Liberia. The track has its good days, but regular maintenance has been an ongoing problem.

QualifiedÂ Liberian coaches, Â a proper track, and overall support are key factors in maintaining and improving the standards that Cooper has set for Liberian runners. These changes will allow Liberia to identify and groom talented athletes.

â€œWe do not send quota athletes to the Olympics. All Liberian track membersÂ must qualifyâ€ he says. Cooper acknowledges the problems that still exists and is prepared to tackle the issues. BetweenÂ coaching and managing the Public Health Program at Morehouse School of Medicine, it seems Cooper has his plate full. However, he always leaves room for his favorite thingâ€” his enormous family. Â Cooper takes time to mention his three daughters; his fiancÃ©e and her two daughters; his parents and step-parents; his brothers and sisters; in addition to other extended family members.Â He says they are his relief.

â€œI believe that I can have it allâ€” family, my public health career, coaching, and anything else God blesses me with.â€

Sharing
Tags Sayon Cooper
Contributions to The Bush Chicken are not tax deductible.