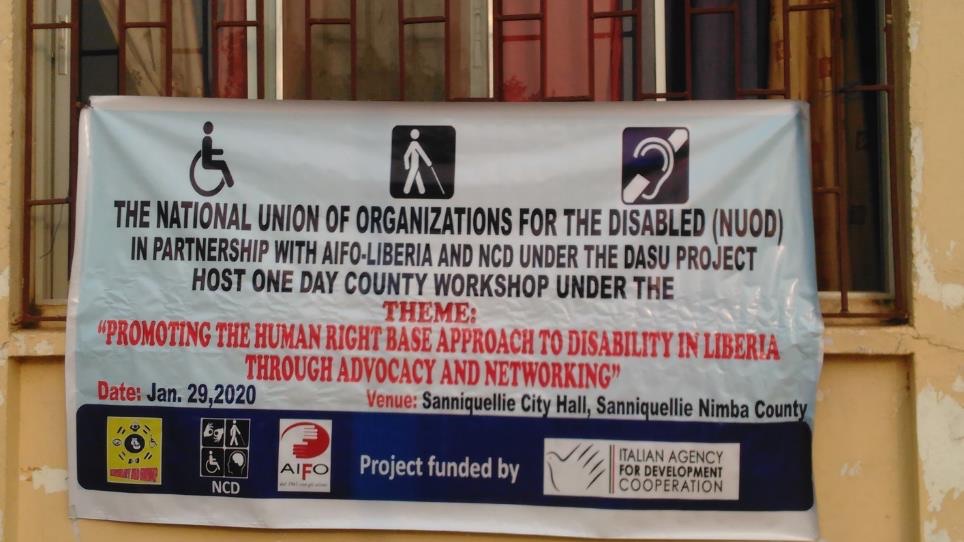 SANNIQUELLIE, Nimba â€“ An official of the National Union of Organizations for the Disabled, NUOD, says government officials need to stop treating people with disabilities as objects of charity.

NUOD is the umbrella group for all organizations of people living with disabilities in Liberia. Its national vice president for operations, Daniel Dagbe, was speaking at the opening of a training workshop on January 29, organized in partnership with the National Commission of Disability and AIFO-Liberia, in Sanniquellie.

The event aimed to bring together people living with disabilities in Nimba face-to-face with local county officials to speak on the plight of members of the disabled community.

Dagbe said for too long, government officials, including presidents, have thought about people living with disabilities only during holidays. He called for an end to this practice, adding that people with disabilities must be catered to at all times.

â€œImagine from the president down to even the sweepers in government feel that we are to eat only two times a year â€“ and that is July 26 and Christmas,â€ he said.

â€œIt is during the July 26 and Christmas celebrations the president will share food to all disabled organizations in this country and this has to stop, and it will only stop depending on the way we as persons with disabilities will proceed.â€

He called on members of the community to stand against such situations by advocating for their rights and dignity through constructive engagements with leaders.

â€œIt is time we begin telling them to give us economic empowerment and it must start in Nimba,â€ he added.

The official further challenged members to see themselves as important parts of society. He cited the example of the former American President Franklin Roosevelt, who was left permanently paralyzed from the waist down but could still serve as Americaâ€™s president. He noted that any disabled person in Liberia should pursue the presidency or other key government positions.

He also accused President George Weahâ€™s administration of failing on its promise to lift at least 10,000 persons with disabilities out of poverty, describing the president as unfriendly to the disabled.

Members of NUOD members at the one-day session in Sanniquellie in Nimba. Photo: Jerry Myers

The president of the Nimba chapter of NUOD, Abestin Tozay, also added to the claim, noting that local officials in Nimba were also neglecting the disabled. Tozay said people with disabilities often roam the streets begging because they lack support to implement empowerment programs that can allow them to live more sustainably. He also named the lack of transportation support, training facilities, and housing as key challenges affecting the community.

He noted that politicians who ignored the disabled for much of the year often used them when canvassing for votes during elections â€“ frequently transporting members in wheelbarrows to voting centers.

After all the criticisms, Nimbaâ€™s assistant superintendent for development, Railey Myers, promised to support the endeavors of people with disabilities. He said the county leadership would better support the community in its quest for economic empowerment.

â€œWe all need to work together to ensure that people do not only look up to you during the July 26 and Christmas celebrations, but throughout the years,â€ he said.

â€œWe will try to build ramps to give you easy access to our offices, but the delay is due to the current economic condition in the country. We will never forget about you.â€

Sharing
Tags Franklin Roosevelt, George Weah, National Union of Organizations of the Disabled
Contributions to The Bush Chicken are not tax deductible.