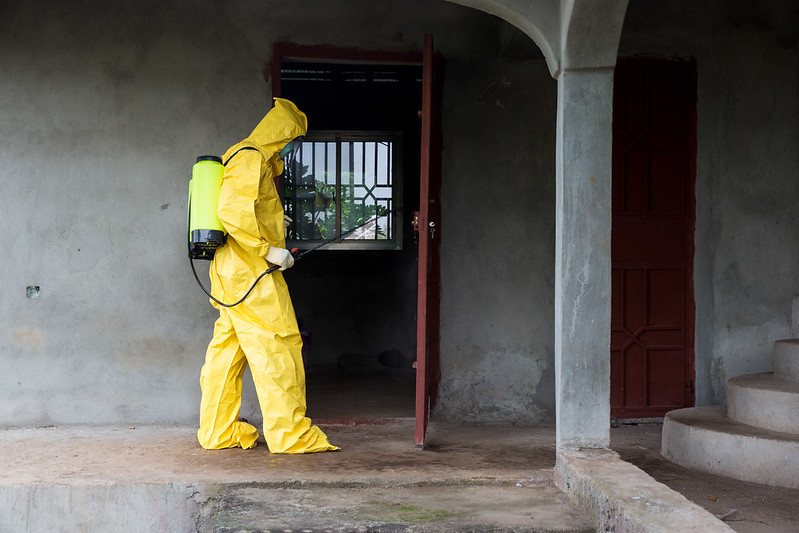 GANTA, Nimba – The Liberia National Police has released a 49-year-old Ministry of Health employee who was previously arrested for spraying chemicals at a home in Ganta. Aaron Kormah’s spraying caused temporary respiratory problems for a young woman who lived there.

In late April, Kormah, a lab assistant at the Gbloryee Community Clinic, was arrested by residents of Gleenyeluu community and turned over to the police in Ganta. He was caught spraying chemicals near the Dolo family home, where family and friends had gone to console the family, which had lost a member to COVID-19.

Speaking to reporters at the Ganta Police Depot, Kormah admitted spraying a mixture of antiseptic, bleach, and water to ensure that visitors were safe. As a health practitioner and a member of the bereaved family, Kormah said he saw it as his responsibility to protect the family and visitors.

“They are my family,” he said. “And all I tried to do was to spray the bathroom and the entire yard to make sure that even people who come here to sympathize are saved by using the materials I brought.”

But the family denied any relation to Kormah. Marie Dolo, the matriarch, said she thought he was one of the many sympathizers who had come to visit.

“For him to say we are related, I swear to God, we are not in any way related,” Dolo said. As a result of the spraying, Dolo said her daughter collapsed to the ground and complained of pain in her eyes and throat, which required hospitalization.

The Nimba County Health Officer, Philip Sahr, clarified that health officials had not sanctioned Kormah’s actions. The lab assistant was kept in custody until his victim recovered and the Dolo family declined to press charges.