GBARNGA, Bong â€“ Tammy Bondo, a mother of four, lost her fifth child in a cesarean section last week Wednesday at the C.B. Dunbar Maternity Hospital in Gbarnga. Her wound from the surgery has not healed fully and she still struggles to walk.

However, at the hospital, this morning, Bondo and many other patients were left unattended to, due to an ongoing protest at public health posts in Bong and across the nation.

â€œI just want to talk to the government to please pay the health workers for them to come back to treat us,â€ Bondo told The Bush Chicken, as she slowly headed outside the hospital, propping herself up by leaning against the wall.

The National Health Workersâ€™ Union of Liberia says it is staging a nationwide strike to push the government to pay salaries owed to its members since July.

The unionâ€™s coordinator in Bong, Martha Morris, said the government has refused to pay salaries to some of the health workers. Moreover, she said many have seen their salaries cut as part of the governmentâ€™s â€œsalary harmonizationâ€ effort. 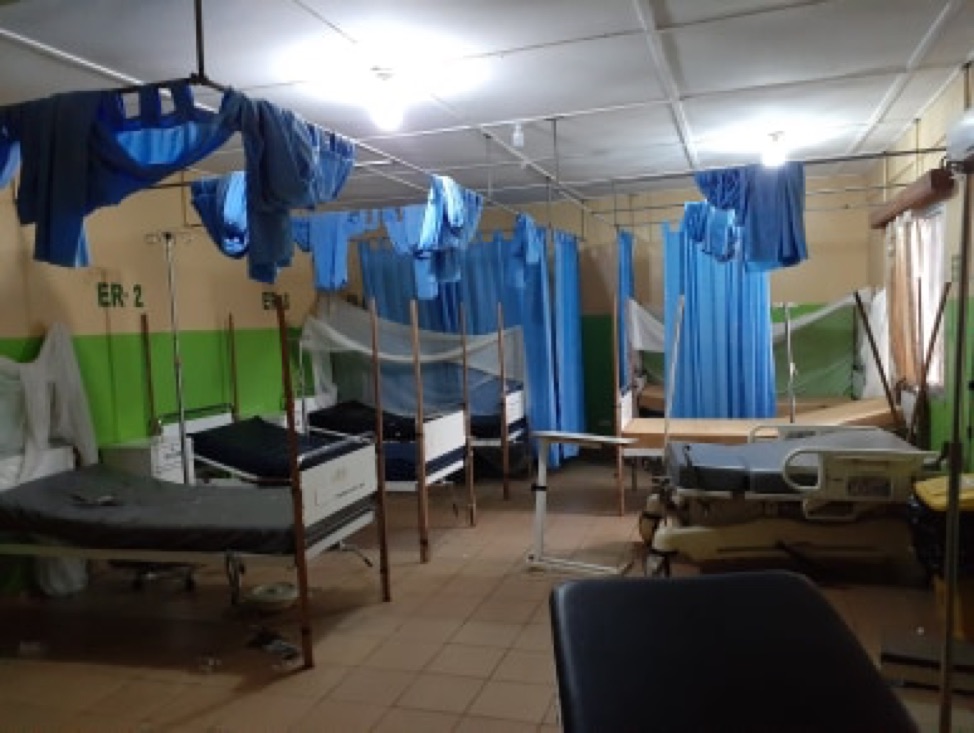 She said the health workers will not return to work until the government addresses their concerns.

Phebe Hospital, the only referral hospital in central Liberia, is also abandoned. Family members had to take their sick unattended relatives home from the hospital.

Bong county health officer, Dr. Adolphus Yeiah, and the medical director of Phebe Hospital, Dr. Jefferson Sibley, both confirmed that nurses and health workers at Phebe and other government hospitals and facilities in the county have refused to go to work.

â€œThe hospital is empty. Only one patient is here in the emergency room. And the reason she is here is [that] she is paralyzed and the caretaker is old,â€ Yeiah said. The two medical doctors said the chain of health delivery â€œhas been brokenâ€ and it was difficult for patients to receive normal treatment at Phebe.

A pregnant woman who needed operation had to be transferred to the privately operated Ganta United Methodist Hospital this morning from Phebe because doctors say there would be no one to cater to her if she is operated on at Phebe.

At the C.B. Dunbar Hospital, the case is a bit different; there are medical supplies and drugs. Its medical director, Dr. Kour Geah, said even though health workers are not in the hospital as a result of the strike, there are two doctors who are helping to treat the critical patients.

â€œWe have enough materials and drugs here and, at the moment, we have two of our doctors who are here helping the patients that are still here,â€ Geah said.

Bongâ€™s third district representative, Marvin Cole, appealed to the countyâ€™s health workers early Monday morning to return to work as he said the government is â€œdoing everything to addressâ€ their concerns. â€œWe want to talk to our health workers to return to every hospitals and health centers to keep helping our people,â€ Cole said. â€œAs a representative, I have voiced my disagreement about the salary harmonization process and the government is working to resolve this.â€

Representatives of civil society organizations and ordinary citizens in Bong are calling on the government to speedily address the concerns of the health workers to enable them to return to work.

This is not the first time for health workers to stage a strike in Bong or the country at large. During the regime of former President Ellen Johnson Sirleaf, there were several strikes by health workers in demand of salary increment, placement on governmentâ€™s payroll, and provision of medical equipment and drugs at hospitals.

However, this particular strike appears more urgent, as it is one of a string of strikes by civil servants frustrated with the governmentâ€™s delay in paying salaries, in addition to reducing salaries in order to meet its payroll obligations. The University of Liberia and Tubman University have both been closed by protests aimed at getting staff compensated and to halt any decrease in their salaries.