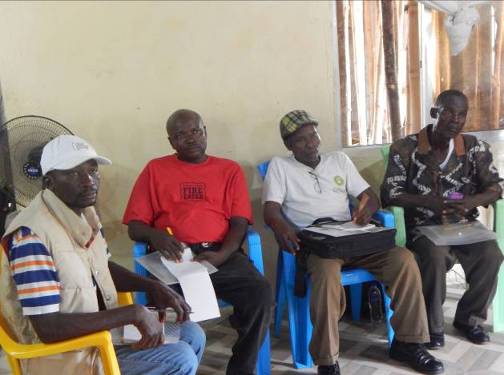 KAKATA, Margibi â€“ Mental health in Liberia has been a problem since the civil crisis, with many Liberians believing that mental health related issues are caused by demonic possession or witchcraft. The recent Ebola outbreak helped to produce an increased number of new patients.

As a result of the enormous needs in the sector, a resilient system of care is being built by the Carter Centerâ€™s Mental Health Program in Margibi. Backed by funding from a US$2.75 million Japanese Social Development Fund through the World Bank, the Center is working to address the critical health needs of people with mental illnesses.

These misunderstandings about the nature and root causes of mental illness result in sometimes harsh and inhumane treatments being administered to persons suffering from mental disorders.

In some parts of Liberia, persons suffering from mental illnesses are subjected to days without food and severe beatings as a means of ‘removing the evil spirit out of them.’

Some patients are chained for several days and forced to sit in the sun for hours while children throw various objects at them.

Adolphus T. Yeiah, Margibiâ€™s County Health Officer, recently told The Bush Chicken that mental health is one of the most overlooked issues in the health sector. He highlighted how Ebola further contributed to stressing the mental health sub-sector. â€œThe virus left behind a trail of psychological and other mental health issues, considering the high level of stress and other conditions it posed on people,â€ Yeiah said.Â â€œMargibi County has been the melting pot for all kinds of mental health conditions after Liberia was first declared Ebola free on May 9, 2015 by the World Health Organization.”

Individuals affected by Ebola were stigmatized in their communities, isolated, and discriminated against because of fear or ignorance regarding the disease.

The Margibi County Health Officer said the effects of so many people losing their relatives, coupled with health workers also losing their colleagues, helped draw attention to the lack of mental health support in various communities.

To render psychosocial support to persons with mental disorders, the Carter Center’s Mental Health Program has worked to train mental health clinicians. The Center supports various communities as a result of the trauma they experienced during the outbreak of the deadly epidemic which ravaged the country.

However, before the Center started conducting its training, Yeiah said mental health issues were a serious challenge in Margibi. Now, he says the training has brought hope for people suffering from mental disorders, adding that â€œa resilient system of care is being built in the county for these patients.â€

â€œHealth authorities in Margibi determined that most of the psychosocial and mental health conditions manifested in community relationships and family life after the epidemic subsided,â€ he said.

Yeiah said that in the past, many clinicians in the county overlooked psychosocial and mental health conditions at the various health care facilities, pointing out that â€œmental health patients were not being properly diagnosed because their conditions were overlooked.â€

Now, 26 health facilities in the county have staff who have been trained to provide intervention services in mental health by being able to detect, diagnose and treat mentally ill persons.

Consequently, he indicated that there has been an increase of mentally ill persons going for treatment at various health facilities in Margibi.

Yeiah also said as the result of the Ebola outbreak in the county, there are people suffering from depression, anxiety, post-traumatic stress disorders, among others.

The training has had a tremendous impact on psychological first aid and immense effect on the social delivery sector of Margibi, according to Yeiah.

He said that unlike in the past where social life in various communities was very tense for Ebola survivors, many are now seeing an improvement in social relationships and overall mental outlook.

â€œThe Carter Center Mental Health program is also having a great impact on clinicians, registered and certified midwives and physician assistants. The program needs to be reassessed in terms of continuation to sustain the positive attitudes that are being developed by individuals in their communities,â€ he said.

Anthony S. Gbeno, officer-in-charge of the New Destiny Medical Clinic in Kakata, was one of the beneficiaries of the training. He said participants discussed mental health disorders, which included depression, anxiety, and post-traumatic stress, among others.

Before attending the training, Gbeno said he had a different opinion on the issue of mental illnesses, believing that they were caused by ‘demonic’ activities.

Gbeno said that after attending the training, his beliefs and approach towards people living with mental illness have changed. Muniatu Brown, an officer-in-charge and screener at the Weala Community Clinic, also informed The Bush Chicken that with the training and help from the general community health volunteers, health practitioners in the area are able to quickly identify people with mental health issues. Brown said people with mental disorders are turning out in huge numbers at the clinic, adding â€œsuch is a big boost for both the clinic and community.â€

â€œThe issue of mental health is on the increase in Weala,â€ Brown added. According to her, the highest number of mental problems in the community account for drug users followed by bipolar and depression that receive treatment at the clinic.

She added that cases the clinic cannot treat are referred to the C.H. Rennie Hospital in Kakata.

Larry G. Boahndao, County Clinician Supervisor at the C.H. Rennie Hospital said the training is a great help to the county to have qualified people in the area of mental health clinical management. Bohandao said the greatest challenge of those trained by the Carter Center has to do with supervision, adding transportation is lacking to take clinicians to the various health facilities to attend to their patients.

Mental health issues were on the increase in Margibi in the past because there was no trained manpower to handle the issues according to Boahndao.

He added that people with mental illness should be treated equally in societies like any other person to enable them to effectively manage their condition.

Watta M. Borbor, Kakata District Health officer said in the past, clinicians at the C.H.Rennie hospital were not handling their patients in the right manner, noting the training has greatly exposeed them in the area of mental health care. Borbor added that with counseling being provided by clinicians to mentally ill patients, there is a great relief for the mental health patients as compared to the past.

Meanwhile, several traditional leaders and healers in Margibi recently attended a five-day training as part of the system of care for persons with mental illnesses.

Dyonah Thomas, Carter Center Mental Health Program Project Coordinator, said his institution is supporting the county health initiative to include traditional leaders and healers in the system of care.

He said his institution is supporting the Montserrado and Margibi health teams to build a resilient health system of care for mentally ill patients.

â€œThe county health teams recruited several traditional leaders in Margibi who reside in the areas of these health facilities where health practitioners were trained in mental health gap or MHgap and the Carter Center supported the training,â€ Thomas stated.

He said the traditional leaders are taught the basic mental health information, anti-stigma messages and how to reduce stigma on mentally ill persons in their community.

According to Thomas, the traditional healers also learned how to collaborate with mental health clinicians, general community health volunteers as well as social workers. This will help during the identification and referrer processes of persons with mental illness, adding that they were also taught how to advocate on behalf of and stand in the gap for these patients.

Thomas said prior to the outbreak of Ebola, many people in the health care system in the two counties did not have the requisite skills to integrate mental health and psychological intervention into primary health care. The only exception was the mental health clinicians trained by the Carter Center.

â€œThese general community health volunteers are trained to provide the right kind of community messages that reduce stigma, identify and help refer persons with mental illness to the health care facility for counseling, treatment, and care,â€ he said.

Thomas added that peer support groups for mental health patients who are in their recovery stage also meet once a week at two different locations in Margibi. There, they can discuss information about their particular conditions, support one another and share ways on how to manage their lives.

â€œThis is a supportive means of keeping mentally ill persons on their medication and managing the tactics they need to fully recover,â€ Thomas shared.

The Carter Centerâ€™s Mental Health Program headed by Janice Cooper is also training 700 health workers and is supporting 6,500 people in 30 communities who have mental health and psychosocial needs.

A special focus will be on deploying 100 trained children and adolescent mental health clinicians in schools, communities and health facilities.