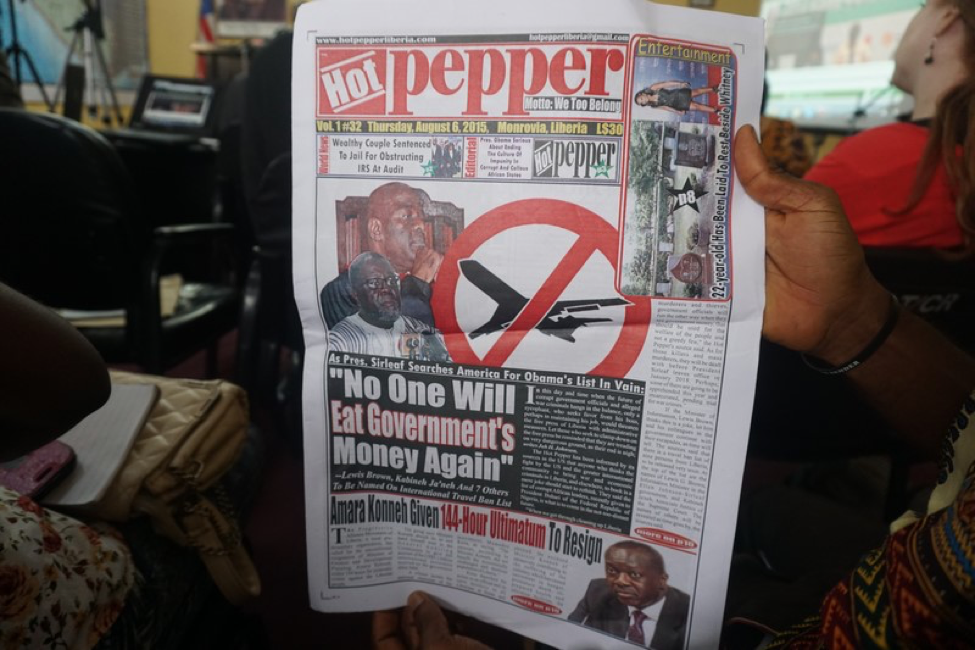 MONROVIA, Montserrado â€“ Philipbert Browne, the man who broke news about the mysterious disappearance of newly printed Liberian banknotes, says he did not receive the second communication from members of the legislature requesting him to reappear.

Browne is the owner and publisher of a local daily, the Hot Pepper Newspaper.

Following Browneâ€™s recent allegations accusing several representatives of the 53rd National Legislature of receiving bribes from the Central Bank of Liberia to print an additional L$10.5 billion in new banknotes, representatives wrote on Nov. 20 to invite Browne to provide proof about his bribery allegation.

The publisher was expected to appear before lawmakers on Nov. 22. Browne wrote to the representatives on Nov. 22 acknowledging receipt of the lawmakersâ€™ letter inviting him to provide clarifications of his statements. However, he said he could not appear given unforeseen circumstances relative to his health.

In his communication, Browne informed lawmakers that he is a diabetic patient and his medications â€œare not found on the Liberian market.â€

He noted that his medication had been ordered through express mail and expected to be in the country within a few days.

â€œI will appreciate highly if the date stated in your communication be adjusted to enable me to adequately take care of my health needs before appearing before the honorable House of Representatives,â€ he wrote.

Browne said his high glucose content could easily place him in a diabetic coma if the necessary preventive measures were not put in place. Browne further wrote that he was attaching a confidential medical report and a letter from the medical director of the St. Joseph Catholic Hospital.

However, Browneâ€™s explanation of his absence provoked laughter and anger from lawmakers who were present at the Capitol Building.

Rep. Jeremiah Koung of Nimbaâ€™s first district, one of the lawmakers accused of taking bribes, said he believed Browne would avoid appearing before the House of Representatives because he would have to defend his claims. Koung, earlier appeared on a local radio and denied having been involved in bribery.

â€œThe money used to purchase my election materials were credited from the bank,â€ Koung said.

Koung said he and other colleagues implicated in bribery by Browne have agreed to file a lawsuit against the newspaper publisher.

â€œBrowne will always complain about his sugar going up when heâ€™s being asked to appear before the plenary,â€ Koung told his colleagues. â€œPlenary should use contempt charges to bring Browne by force.â€

But Acarous Gray of Montserradoâ€™s eighth district disagreed with Koung and others over the contempt charges.

â€œI encourage my colleagues to pursuit their lawsuit of defamation against Browne,â€ he said. â€œWe cannot hold Browne on contempt charges for not appearing because he wrote a communication about his illness.â€ He argued that Browne cannot be held in contempt because he has never obstructed the function of lawmakers.

Gray, who has been one of several lawmakers calling for the appearance of Browne to provide proof about his bribery allegations, called for Browne to not hide â€œunder the canopy of being a diabetic patient.â€

Gray described Browneâ€™s action as cowardly: â€œA coward will also want to find an escape route, and that is what Browne is engaged into.â€

However, majority of the lawmakers voted in favor of the contempt charges for Browne to appear on Tuesday, November 27.

Bhofal Chambers, the speaker of the House, then instructed the chief clerk of the House of Representatives to write a communication to Browne inviting him to appear on November 27.

Browne again failed to appear, prompting the lawmakers to order the Liberia National Police and Justice Ministry to arrest him and produce his living body before the plenary on Friday, November 30.

On Wednesday, November 28, Browne spoke on OK FM from Tokyo, Japan, where he said he had never received any communications from the House of Representative inviting him to reappear.

â€œIf someone invites you to an occasion, you have the option to go or not to go,â€ he said, noting that he had a previous engagement. That included traveling to Accra, Ghana, where he stayed for one week trying to get his visa to attend a conference in Tokyo.

â€œI left Liberia on Sunday morning via Royal Air Maroc and arrived in Morocco and later traveled on the same plane to Doha and boarded Air Qatar for Japan,â€ he said.

Browne said he learned that the Seargent of arms at the House of Representatives said he went to the Hot Pepper Newspaper office on Front Street with the communication and met the office closed.

â€œI own the Hot Pepper Newspaper but do not work there,â€ Browne noted. He said he has not been to the newspaperâ€™s office for a year.

He maintained that his office is located on Benson Street. Browne said he is in Japan on national duty representing Liberia.

â€œSo, I cannot be running away from anybody,â€ he added. â€œI have done nothing wrong to run away.â€

Browne emphasized that he does not have any problem appearing before lawmakers.

â€œI will be back in the country on December 5,â€ he said.

However, since the lawmakersâ€™ extraordinary session is expected to end on Friday, November 30, Browne will likely not appear before the body any time soon.