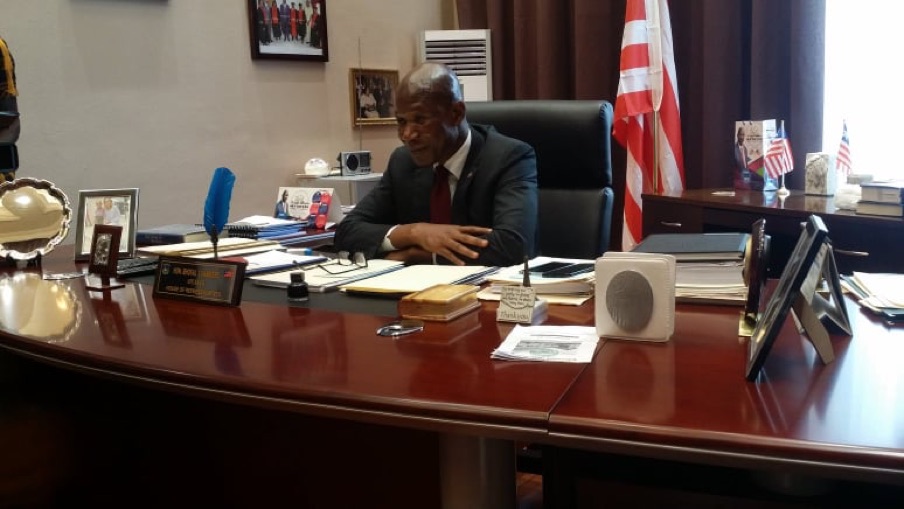 MONROVIA, Montserrado â€“ House Speaker Bhofal Chambers has constituted a 16-member specialized committee to visit concession companies across the country and determine whether those institutions are abiding by ratified agreements signed between them and the government.

The decision was prompted by a communication from Rep. Clarence Massaquoi of Lofaâ€™s third district, who said there have been a series of reports from residents in concession areas that companies were not living up to their legal responsibilities.

Massaquoi noted that most concession companies are given tax waivers, but they are not providing basic services to the people, as agreed upon in the agreements.

â€œItâ€™s our job to follow up on each concession agreement to ensure the spirit and intent for which we affixed our signatures are met,â€ Massaquoi noted. â€œAnd just as we took the decision in the interest of the people to pass a law, in my mind, democracy does not just end at the point of decision making.â€

He continued, â€œWe say we have investors, but today we are losing millions of dollars to these ratified and approved investment incentives in the country. Some of them said they will provide jobs for our people, but most time, they mislead the public, especially those of us who are decision makers. Itâ€™s time for us to correct ourselves.â€

The Lofa lawmaker said he and other lawmakers had done research on the issue and understand the gravity of it.

â€œToday is the beginning of our second sitting and there is no good time other than now for us to act â€“ not just appropriately, but to act in a timely fashion to redeem the economy of this state,â€ he noted.

He said he wanted to ensure that the agreements of companies like Firestone, Sime Darby, and others were reviewed to ensure compliance.

On Tuesday, members of the House voted unanimously to support the 16-member committee on their fact-finding mission across the country.

However, while a majority of lawmakers in session spoke in favor of the move, Rep. Adolf Lawrence of Montserradoâ€™s 15th district expressed a dissenting view on the matter. He was then thrown out of session on orders of Speaker Chambers for disturbing the session.

Outside, Lawrence told reporters that the speaker had refused to recognize him after he had his hands up for over 10 minutes.

â€œI represent the people of district 15. I must be given the time to speak for my people,â€ he said. â€œI was elected by even more people than the speaker; I am more disappointed in his leadership.â€

Lawrence said the very lawmakers complaining about the concession agreements were the ones who approved those agreements.

â€œ[The Public Procurement and Concession Commission] even advised you not to pass those agreements, but you went ahead and compromised PPCC regulations and passed the [mineral development agreements]. Then you want [to] blame the concessionaires,â€ he added.

â€œConcession agreements can come to you for sanitizing. Many times, you asked anti-graft institutions like PPCC, [General Auditing Commission] to advice you as to what to do; you neglected the advice, closed your eyes and pass all the agreements â€“ then you want blame the concessionaries for not performing? Then something [is] wrong with you â€“ your function was compromised.â€

The legislature itself has taken actions in the past year to investigate specific concession companies, including Sime Darby Oil Plantation. After a video surfacedÂ on social media showing a man being tortured in Grand Cape Mount by the companyâ€™s security guards after being caught for stealing palm nuts, lawmakers constituted an eight-member special committee to investigate allegations of torture and poor working conditions of Liberians at the company.

The committee, headed by Margibiâ€™s first district representative, Tibelrosa Tarponweh, looked into other aspects of whether the company was adhering to the concession agreement it had with the government. It mandated the National Bureau of Concessions to monitor the companyâ€™s actions.